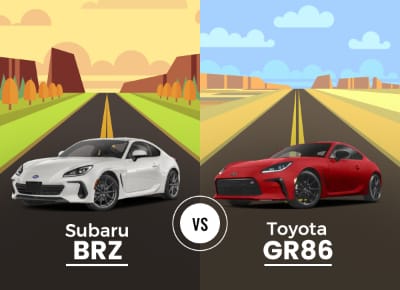 To say that the Subaru BRZ and the Toyota GR86 are cut from the same cloth would be an understatement. A quick look at the numbers seems to indicate that there is barely any difference between them.

So, where do we find any differences? Well, besides noting a few nearly insignificant cosmetic dissimilarities, it takes a close inspection of each of these two charming sports cars to come up with anything.

Ultimately, though, do these distinctions make one a better drive than the other?

What’s in a Name, What’s in the Numbers? 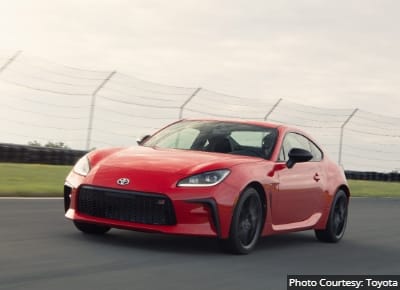 First introduced to the U.S. marketplace for the 2013 model year as the BRZ from Subaru and the FR-S from Scion (Toyota’s former youth-oriented nameplate), the BRZ letters reference the Boxer engine with horizontally opposed cylinders, Rear-wheel drive, and Zenith – an aspirational usage of the astronomical term, while the FR-S stands for Front engine, Rear drive, Sports car. Right from the start these vehicles were meant to be twins.

Once Toyota dropped the Scion line, they rebranded the FR-S as the Toyota 86, but now with the new 2nd generation model introduced for 2022, Toyota has renamed their car the GR86. Meanwhile, Subaru carries on with BRZ. Nevertheless, both vehicles continue to share the same platform and powertrains and offer just two trims, each available with either a manual or automatic transmission.

By the numbers, there is virtually no difference between the two sports cars. The automatic transmission-equipped GR86 earns a 1 mpg higher rating on the highway, somewhat inexplicable other than it being 13 pounds lighter than the BRZ and having some aerodynamic differences most apparent in the nose and grille.

The Takeaway: If there are differences between the BRZ and GR86, you’ll not easily find them by looking at the spec sheet, and even then, the differences are nearly insignificant. 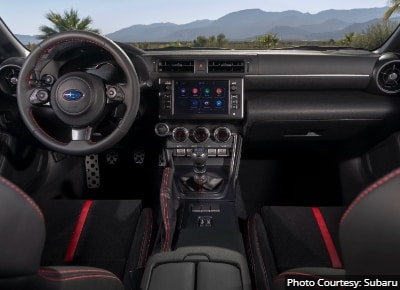 When it comes to curb appeal, buyers can get a bit more subjective in their decision between the two. The grille on the BRZ appears wider, tapering inward from top to bottom. Also, accentuating the grille’s width are horizontal layers going across the opening, creating a sophisticated sporty appeal. The GR86 presents a more aggressive vibe in its grille, being almost rectangular with a black mesh that appears as if it's sucking in gobs of air.

Similarly, at the tail, the BRZ provides a somewhat standard lip spoiler on both the base Premium and upmarket Limited editions, whereas the GR86 offers a more assertive duckbill spoiler on its top-tier trim.

The manufacturers stayed the course on the inside. Dials, switchgear, vents, steering wheel – all the same except for the badging. There is some differentiation with telematics that gives the display content a slightly different look to facilitate accessing either Subaru Starlink services on the BRZ or Toyota’s Safety Connect on the GR86. Also, the BRZ gets red stitching on the steering wheel, handbrake, seats, and floormats, whereas the GR86 gets contrast stitching. Overall, it’s a sporty, modern, driver-centric design replicated in each model.

The Takeaway: It’s anyone’s guess why the two automakers didn’t coordinate their trim naming. To be clear, while Subaru uses the name Premium for their base trim, Toyota uses the same name for their top-tier trim. The base Toyota model is simply called the GR86. 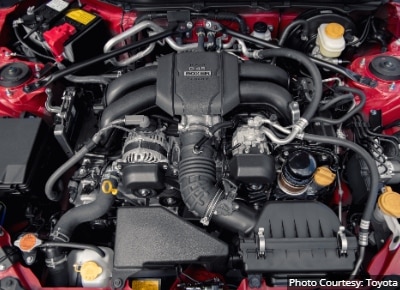 The comparison begins to feel redundant when one looks at performance numbers. It’s the same 228-horsepower naturally aspirated 2.4-liter horizontally opposed 4-cylinder Boxer engine developed by Subaru that powers each model. However, each manufacturer is said to have tuned them differently to deliver a different driving experience. Each is available with either a 6-speed manual transmission or a 6-speed automatic.

Ultimately, if there are any noticeable variances in performance, they will more likely be found in the handling due to differences each manufacturer introduced to the chassis and suspension. The key here is damper settings that affect front and rear spring rates. Toyota has tuned theirs higher in the rear and lower in the front than Subaru. Also, the rear stabilizer bar is mounted to the unibody on the BRZ, but the GR86 uses a rear-suspension-member mounted setup.

The Takeaway: It may not make much difference in everyday driving, but for drivers who intend to take their vehicle to the track on weekends, the BRZ will please those who prefer precision handling while the GR86 offers a bit more of an aggressive feel. 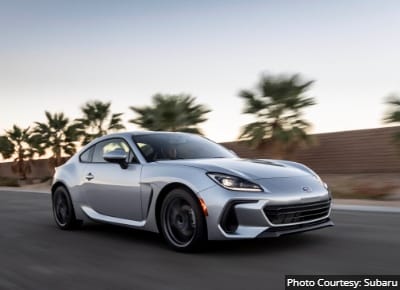 Once again, the BRZ and GR86 are essentially equals when it comes to standard safety equipment, but there are subtle differences in the availability of a few advanced safety technologies. The BRZ offers Subaru’s Eyesight Driver Assist package as an option in either trim. It features adaptive cruise control, lane centering, and pre-collision braking. In the GR86, an Active Safety Suite with the same features is standard in the Premium but not available in the base.

As for warranties, both models come with 3-year, 36,000-mile basic and 5-year, 60,000-mile powertrain warranties. However, roadside assistance coverage varies. The BRZ gets 3 years, 36,000 miles, while the GR86 provides 2 years, unlimited miles.

The Takeaway: Since pricing generally differs by only a few hundred dollars – model to model; trim to trim, it makes sense to look closely at this category of features for the best value. If you’re locked into getting a base model, the BRZ offers a better avenue to advanced safety tech, but if you’re leaning toward the higher trims with an automatic transmission, the GR86 gives you more for the money.

So, Which Is Better - Subaru BRZ or Toyota GR86?

Generally, the answer is going to be subjective when comparing two vehicles that, from the start, were designed to be twins.

If performance is your goal, do you thrive on boldness or elegance? The GR86 leans slightly more toward the first of these characteristics, whereas the BRZ exhibits a bit more of the latter.

Why are the Subaru BRZ and Toyota GR86 so similar?

A collaboration like this is more about strategic alliance than about just the vehicles themselves. Both companies are positioning themselves for future developments in autonomous driving and vehicle connectivity, agreeing to share technologies that benefit each. There are, of course, financial ties that increase the value of each brand.

What do the BRZ and GR86 compete against?

The competition for these vehicles would include moderately priced 2-door, 2+2 sports cars such as the MINI John Cooper Works Hardtop and EcoBoost equipped editions of the Ford Mustang. Also, one would want to at least consider the Mazda MX-5 Miata even though it’s a two-seater.

What are the advantages of manual transmission versus automatic?

Essentially, driver engagement. While it is true that an automatic transmission with paddle-shift control increases engagement by allowing the driver to decide how far to wind out the engine and when to shift, it is not the same as the control a driver has with a manual transmission clutch and gear shifter. In other words, fun. For some drivers, however, manual shifting seems tedious or difficult. For these two sports cars, fuel consumption is more efficient with the automatic transmission.