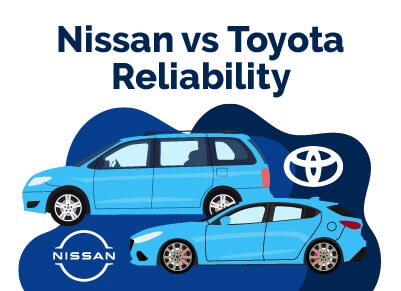 There’s no doubt that Toyotas are one of the biggest car manufacturers in the world, with an amazing lineup of high-quality cars. With the popularity and reputation attached to the Toyota brand, is there a chance that Nissan cars are better than Toyota cars?

Nissan holds the record as one of America’s best-selling Asian car brands. The modern design, great performance, and smooth and comfy rides that Nissan cars offer are notable advantages of the brand. However, when it comes to a Nissan vs. Toyota reliability comparison, Toyota is more reliable than Nissan.

Toyota has a higher reliability rating than Nissan, lower maintenance costs, better gas mileage, higher safety ratings, and a higher standard of durability. Toyota is known for its versatility, providing cars in different categories. This is different from Nissan, which is focused on the production of SUVs.

This does not in any way mean that Nissan is unreliable. The reliability margin between Toyota and Nissan is so slim that Nissan even beats Toyota in some categories.

Here’s all you need to know about Nissan and Toyota’s reliability.

Nissan vs. Toyota Reliability: Which Is better?

Nissan was Toyota’s worthy competitor not until Renault acquired it and adopted the use of Jacto CVT. The performance and durability of Nissan dropped, even as they started battling with automatic transmission and CVT problems.

Although these two brands offer cheap repair and maintenance costs, owning and maintaining a Toyota car is cheaper than a Nissan.

Comparisons of Nissan and Toyota’s designs lie in individual preference. Both car brands offer creative designs, well-fashioned body lines, aerodynamics, and ergonomics across their different models. The only difference here is that while Toyota works hard to meet customer satisfaction through versatility and producing cars that last till the end of the world, Nissan is more concerned about sophistication.

Nissan cars are loaded with sophisticated upgrades that you might only find in Toyota’s higher trims. Nissan presents a sportier outlook than Toyota, which prefers aggressiveness. However, when it boils down to the reliability and durability of their designs, many drivers have complained about how easy it is for Nissan car paints to start peeling.

Although Nissan provides a 3-year paint warranty and 12-year perforation from corrosion warranty that covers this issue, it is a shame that you will have to worry about paint failures if you start taking your Nissan car for desert rides.

Nissan offers more technology features on its basic levels. To enjoy advanced technology on Toyota, you will need to upgrade to higher trim levels.

Nissan places more emphasis on design/technology sophistication than Toyota does. This doesn’t mean that Toyota cars are plain on technology. It indicates that Nissan takes the upper hand in technology, which is evident in Nissan Intelligent Mobility.

Unlike Nissan, Toyota doesn’t have Apple Car Play support for most models. Although improvements are made to introduce the Apple Car Play in higher trims, Toyota prefers its system, the Entune.

Nissan beats Toyota in providing adequate technology that you can rely on. This is also because Toyota lacks advanced infotainment, connectivity, and other important features.

Toyota is more durable than Nissan. Ranked second on the reliability index, the durability of Toyota outlasts most of the car brands in the market.

We must point out that even though Nissan lasts long and achieves impressive high mileage, it is easier for your Toyota car to last longer than a Nissan car. Toyota is your go-to brand when you want a car that can last more than 10 years without major repairs. Toyota cars will easily exceed 300,000 miles with little maintenance and repair cost.

Nissans don’t last long as Toyota cars do, but you are assured of a better technology build.

Toyota and Nissan share many similarities in warranties. They offer a 36-month/36,000-mile limited warranty coverage and a 60,000-month/60,000-mile powertrain warranty. However, Nissan offers higher roadside assistance. Nissan’s extended warranty period will give you less time to worry about the maintenance cost. This can serve as some sense of consolation.

Many Nissan models are very good on gas, with an impressive fuel-efficient system. Some of the best Nissan models on gas mileage include the 2021 Nissan Leaf, Nissan Versa, Nissan Maxima, Nissan Sentra, and lots more. However, Toyota Camry beats most Nissan options on gas-powered fuel-efficient cars, with the Toyota Prius doing better on hybrid options.

Both Nissan and Toyota have impressive safety features that handle users’ needs. However, Toyota beats Nissan with a more reliable safety infrastructure.

Toyota has higher safety ratings, all thanks to their improvement in the Toyota Safety sense. However, Nissan is becoming innovative by introducing the Nissan Safety Shield 360°. Nissan’s intelligent mobility suite and safety features are rising at an impressive speed to beat Toyota’s safe reputation, but there’s much ground to cover.

Nissan and Toyota have a reputation for producing reliable engines. Both car brands have engines that have no difficulty exceeding the 250,000-mile limit.

It is important to note that while both car brands produce great engines, Toyota tops the chart with more reliable engines. However, the performance of these brands’ engines varies according to the models they produce.

Toyota offers better handling and performance, offering versatility across all its lineup. Nissan invests more in its SUV models, making it beat Toyota in that category, with Toyota beating Nissan in Sedan and Truck performance.

The differences between Nissan and Toyota boil down to personal preference. It is obvious that Toyota is more reliable than Nissan, but Nissan produces better cars in the SUV category. However, if your decision boils down to cost and affordability, then you should stick with Toyota, but if you are a fan of Technology and wouldn’t mind the cost of maintenance, then you should go with Nissan.

How long do Nissans last?

Which is more expensive to maintain: Nissan or Toyota?

It is more expensive to maintain a Nissan than a Toyota. The average annual cost of maintaining a Nissan is $500, while that of a Toyota is $441.