All of the vehicles we’ve chosen are midsize or larger in the SUV category. We skipped luxury models but will mention them where relevant to their non-luxurious stablemates.

What Is Being Considered?

We are considering tow rating (capacity), towing comfort, and size category for our rankings. Pricing is another consideration, of course, as are seating capacity and cargo volume.

So to choose the best, we went with tow ratings first and then our first-hand experience actually towing with these rigs to gauge how comfortable that towing experience was. After all, a big part of towing safety is how comfortable the driver feels while guiding that trailer. 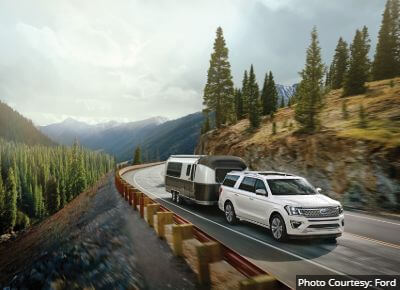 The full-size Ford Expedition is available in both a standard and a long wheelbase (Max) configuration. The Expedition Max adds more cargo space by lengthening the vehicle a few inches. The Expedition has an independent rear suspension, making it ride like most car-based crossover-SUVs despite having a pickup truck’s underpinnings.

The Expedition’s maximum tow rating is phenomenal for the segment and rivals some pickup trucks for capability. When towing heavy trailers, the Expedition, especially in its Max form, feels strong and capable and does not get overwhelmed by the trailer’s weight. We did note that the transmission’s shifting can feel rough when in trailering mode, but this did not affect trailer control or braking. The rough shifting mainly affects ride quality.

At the top of our list, the Expedition features a lot of cargo space, seating for up to eight people, and the highest towing capacity of its rivals. We would also recommend the Lincoln Navigator for those looking for the Expedition’s capabilities in a luxury format. 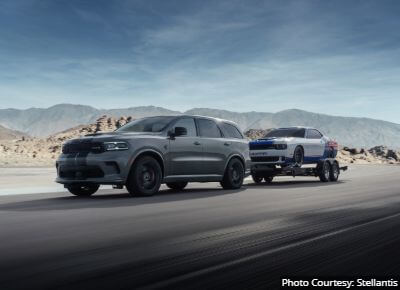 The Durango SRT lands on our list as the only non-truck-based sport utility here and as the only “muscle car” variant found. The Durango SRT is also one of the more expensive on our list, but comparatively, it comes with more standard features in the SRT model than most of the other base models listed.

The powerful 6.4-liter V8 in the Durango SRT produces 475 horsepower and gives this crossover-SUV its powerful towing capacity. Going with that, the Durango SRT has solid chops for pulling that weight in terms of its feel while doing so. The only downside to this rig is the mirrors, which will require some strap-on or clamp-on extensions to see past a long trailer.

As a midsize crossover SUV, the Durango has a very comfortable interior, drives very well as an everyday vehicle, and offers more on-road comfort and convenience than many of the other options on this list. The SRT model is especially fun to drive, thanks to the grumble of the exhaust and muscle car sounds when the throttle is pressed hard.

You may qualify for additional deals and incentives, check out this month's Dodge deals here. 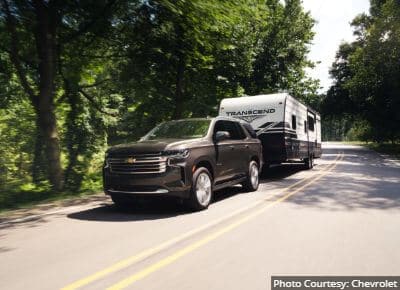 The Tahoe, like the Expedition above, has made several of our SUV lists. Its redesign brings an independent rear suspension, a lot of interior space, and powerful capability. We chose the Tahoe over the larger Suburban based on the Tahoe’s slightly higher towing capacity; its tradeoff for having a slightly smaller cargo area.

Next to the midsize Durango SRT above, the Tahoe has the most car-like feel in our lineup here. It’s comfortable, drives easily, and has great ergonomics. Its towing capacity is huge, and it confidently pulls that weight thanks to its truck base.

There are several options for those looking at the Tahoe, including the Chevrolet Suburban if larger cargo space is needed and the more upscale GMC Yukon if more premium appeal is desired. The Cadillac Escalade is an excellent choice as well.

You may qualify for deals and incentives, check out this month's Chevy deals here. 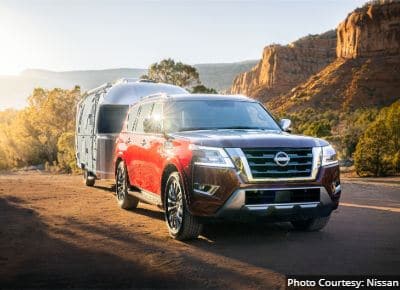 Long in the tooth in terms of design, the Armada remains a stalwart SUV choice. The Armada is bulky and muscular, having a persona much akin to the heavier SUVs of the past. Rooted in that are its tow rating and capability while pulling a load.

However, the Nissan Armada’s interior is less accommodating than the above three choices, and its age shows when it comes to that previous-generational layout. Hence the smaller cargo space and tighter third-row quarters.

The full-size Armada makes up for those shortcomings with a seemingly underrated tow rating (it has high confidence) and equally underrated off-road chops. Save for the next SUV on our list, the Armada is the most off-road-ready of the bunch so far.

Cargo capacity is middling in this full-size SUV, largely because of the way the third row stows. Rather than folding into the floor as with most SUVs, the third row of the Land Cruiser folds up and to the sides, narrowing the load space as a result. This accommodates the full-sized spare, and bulky off-road gear found underneath the Land Cruiser but is a big downer when it comes to cargo hauling.

That being said, the Toyota Land Cruiser is a monster of a machine capable of more than many can muster. It rides relatively well, comparatively, but lacks the appeal of the first three options on our list when it comes to on-road refinement. At its beginning price point, the Land Cruiser is formidable in both cost and accouterments.

What is the best SUV for towing?

Going simply with towing capability, it’s the Ford Expedition. However, if other metrics are also important to you, such as unladen ride quality, number of seats, etc., then all five of those listed here are worth shopping to find the right match.

Are other midsize options like the Durango SRT good for towing?

Yes, though most have a limited capability by comparison. The average tow rating for a midsize crossover-SUV is about 6,500 pounds. That’s enough for a lake ski boat, a medium-sized camper trailer (RV), or a trailer with a couple of ATVs or UTVs on it. However, most car-based crossovers struggle to control a heavy trailer compared to the bigger SUVs that dominate our list.

How did you rate cargo space for this list?

What is the best off-road-ready SUV for towing?

What can an SUV tow?

Most full-sized sport utilities can, for example, tow a fairly large boat and trailer--the type of boat most would take to a lake. Most can also tow a six- or seven-person camper trailer (RV, roughly 8,000 pounds). Most midsize SUVs are capable of much of this as well, though the weight limits are lower.