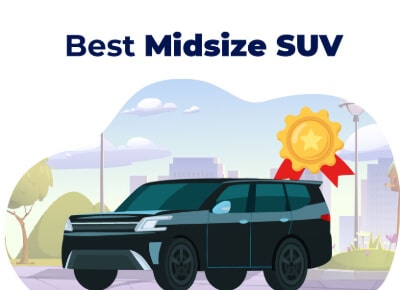 Midsize vehicles are the Goldilocks solution - not too big, not too small, but just right. That’s been proven true with sedans and trucks, and it is no less a maxim among SUVs as well.

The popularity of midsize SUVs in recent years means the market is brimming over with excellent offerings from various manufacturers.

To help you make sense of what’s out there, we’ve whittled down this roster to our top five favorite midsize SUVs. The following models have impressed us with their space, comfort, performance, value, and safety.

Check out all our picks for the best SUVs by size >>

What Is Considered a Midsize SUV?

The midsize SUV segment is a bit shadowy when it comes to what exactly qualifies something as midsized. Dimensions can vary widely among different SUVs that qualify as midsize.

To paint some broad strokes, typical midsize SUVs range from 185 inches long to 195 inches long. Four-cylinder power has become the standard in this class, but you’ll still find some optional V-6s in the mix as well.

Most models in this segment feature just two rows of seating, but some models, such as the Kia Sorento, squeeze in a third row. Large midsize SUVs like the Toyota Highlander and Chevrolet Traverse usually come standard with three rows. Our recommendations feature a mix of midsize SUVs to cover all their iterations.

Front-wheel drive is standard on pretty much every model in this class. All-wheel drive, however, is widely available and is typically the more common drivetrain - north of the sunbelt, at least. Genuine four-wheel drive is limited to options such as the Jeep Wrangler, which is a proper midsize SUV in four-door form.

Because of their powertrains and drivetrains, most midsize SUVs on the market are actually crossovers. Unlike SUVs, crossovers utilize advanced all-wheel drive rather than four-wheel drive with a separate transfer case and other more serious off-roading equipment. We feature both SUVs and crossovers on this list to cover the full spectrum of models competing in this segment. 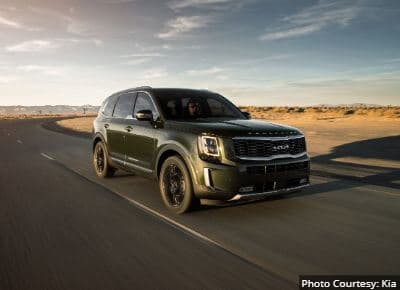 At this point, you might think all us auto journalists are merely parroting praise of the Kia Telluride, given how well received it has been by consumers and critics alike. But the zealous compliments aren’t mere hyperbole: the truth is, the Kia Telluride is a remarkable vehicle. Kia has cooked up something special with this outstanding three-row midsize SUV.

We could discuss the powerful standard V-6, the ample interior space, or the elegant styling. We could gush about the standard and available features, which are comprehensive enough to make luxury SUVs blush. Maybe we talk about the hyper-competitive price that has put everyone else on notice.

Individually, all these traits would elevate an SUV above its rivals. But together, they create an aura that hasn’t been felt in a long time: something that genuinely makes you do a double-take when you realize the price and competition. There is a clear sense that the Telluride raises the bar for midsize SUVs on account of how well-rounded it is. Few vehicles can deliver this much goodness without any meaningful compromise, yet the Telluride pulls it off.

For that, we have no choice but to award it the title of the best overall midsize SUV. It is more than just a crossover: it is a new standard for an incredibly competitive segment. We’re excited to see how the competition responds to this Korean game-changer. 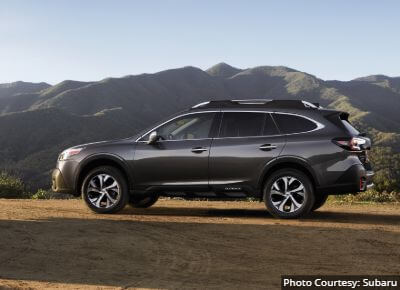 What? A station wagon on this list? Well, perhaps we’re cheating a bit by giving the nod to the Subaru Outback, which has long been referred to as a wagon rather than an SUV. But with the affordable station wagon essentially nonexistent, the Outback makes a great stand-in for a midsize SUV on account of its passenger and cargo space. There’s also its ability to trek out into the sort of backcountry typically reserved for off-road-oriented SUVs. Though it might look like a wagon, the Outback has the heart of an SUV.

But the real reason we ranked it on our list is due to its excellent price point. At a hair over $28,000 after destination, the all-wheel drive Outback is a veritable deal - remember, the average transaction for a new car is now hovering near $40,000. Comparatively, this Subaru delivers boatloads of value on account of its pleasant and airy cabin, practical if unexciting 2.5-liter boxer four-cylinder, and 8.7-inches of rock-clearing ground clearance.

If you go heavy with the options, you can raise the price to about $40,000, but you’ll have to work to do so - and in our opinion, doing so misses the mark with this pragmatic Subaru. The real value is found in the mid-level trims, which, for around $30,000 or a bit more, endow this Subaru with plenty of great features for a steal of a price.

If you’re the type who appreciates a wagon silhouette but needs the practicality of an SUV, the Outback is an excellent budget option that won’t disappoint. 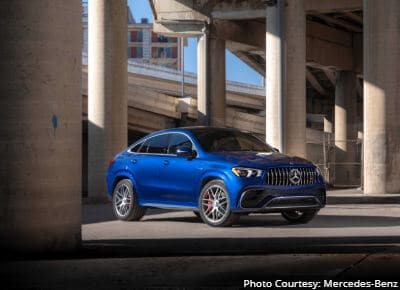 Luxury abounds in the Mercedes GLE, our pick for the ritziest midsize SUV. It starts by opening the door and laying eyes on the acres of chrome and wood, layered on with an eye for glittery boldness. It continues with the excellent assortment of powertrains, which range from fast to lose-your-license absurd. It’s all tied together with a long list of available amenities.

Mercedes used to be demure, only hiding luxury in the heft of its doors and switchgear, but that’s no longer the case: luxury is now shouted from the extroverted cabin. Some will hate it, others will love it. What can’t be denied? It all feels luxuriously self-indulgent. There is an element of glitz and glamour that create a certain sense of occasion in the GLE’s cabin - something missing from many other luxury SUVs.

As for performance, the base engine is a 255-horse four-cylinder that does the job with competence and gusto, but it pales in comparison to the available powertrains, which include a 429-horse twin-turbo V-6 and a bonkers 603-horse twin-turbo V-8. That last one runs for six figures but will rival many sports cars in both acceleration and theatrics.

Pricing for the GLE starts at $55,000 or so and runs well past $100,000 for a loaded-up GLE 63 S. Those figures aren’t anything to sneeze at, but luxury has never come cheap. We say this one is well worth its price tag.

You may qualify for additional deals and incentives, check out this month's Mercedes-Benz deals here. 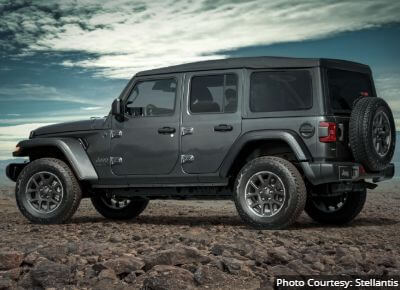 This was a shoo-in for the four-door Wrangler Unlimited, an SUV that has been conquering the remotest and most difficult of trails since its inception in World War II. The latest Wrangler is at once a far cry from that early Nazi-conquering tool while also remaining as near to the original concept as possible. Jeep has found that rare balance between history, heritage, and modernity that most legacy models bungle in one way or another.

The rawest Wrangler is the Rubicon, which comes straight from the factory with a mild lift, off-road tires, provisions for a winch, and upgraded suspension for extra articulation. But even the regular models are no poseurs in the dirt: they too get genuine four-wheel drive, multiple drive modes for different terrains, and excellent ground clearance.

Besides its off-road readiness, the Wrangler offers touches of modernity. Want a quality infotainment system? The 8.4-inch unit with Jeep’s Uconnect software delivers. How about touches like heated seats and leather upholstery? Just check the box for those options. As always, the doors and roof come off at a moment’s notice for the true Wrangler experience.

The Wrangler is just enough old-school mixed with just enough new-school to delight traditionalists and youngsters alike. Though it isn’t as cheap as it once was - base models begin around $35,000 and don’t even get power windows and locks - the Wrangler is still the ultimate off-road midsize SUV that urges you to go from the mall to the mud pit. 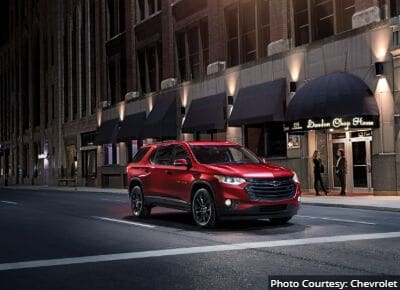 If you look at total passenger volume, there’s one midsize SUV that rises above the rest: the Chevrolet Traverse. It features a whopping 154.7 cubic feet of passenger volume, a figure that outpaces any other midsize SUV. Indeed, that’s closing in on both full-size SUVs like Chevy’s own Tahoe as well as minivans like the Chrysler Pacifica.

The Traverse has mastered its space utilization so that it features a third row with 33.5 inches of legroom - far more than the typical three-row midsize SUV. It’s enough to fit real adults, not just children. And behind the third row? 24 cubic feet of cargo, another impressive figure in its own right.

The second row features 38.4 inches of legroom, which doesn’t merit headlines but is competitive among this segment. Behind this row is 57 cubic feet of cargo space; folding the second row opens a full 90 cubic feet to play with. These numbers don’t quite rival minivans for versatility, but come closer to doing so than anything else considered midsize.

Aside from the interior dimensions, the Traverse has many selling points in its own right. Standard features include goodies like wireless Apple CarPlay and Android Auto and a wifi hotspot. Automatic emergency braking, lane-departure warning, and lane-keep assist are all standard. Six different trims, the cheapest being about $32,000, offer a price point for every shopper.

For the big family who needs to haul the whole brood, the Chevy Traverse is an excellent alternative to a full-size SUV or a minivan.

See all picks for the best SUVs by size » 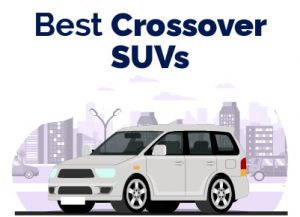 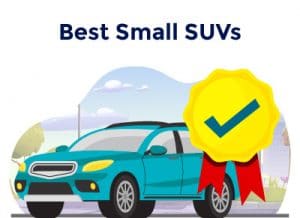 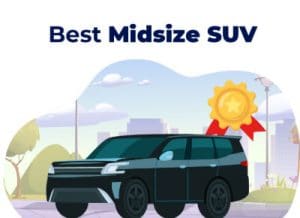 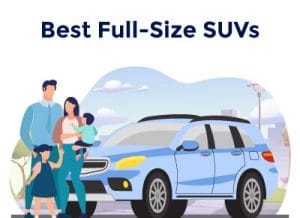 What is the best midsize SUV?

The Kia Telluride takes this title. It is the most luxurious, plenty spacious, and surprisingly affordable. There’s little this SUV doesn’t do well.

Which midsize SUV has the highest tow rating?

Among our selections, the Mercedes GLE, with a whopping 7,700 pounds of towing. That figure is among the best of any midsize SUV, luxury or no. Most models from the mainstream manufacturers advertise around 5,000 pounds for a maximum towing capacity.

Which midsize SUV has the most cargo space?

The Chevy Traverse, with 90 cubic feet of total cargo space. It’s the champ among midsize SUVs when it comes to space utilization.

Which midsize SUV has the biggest third row?

Again, the Traverse is tops in this category with its 33.5 inches of third-row legroom. Most midsize SUVs offer closer to 30 or 31 inches of legroom for the rearmost row.