Best Electric SUVs: Which Has the Best Range?

The electric vehicle tsunami is about to hit. As we stand today, the marketplace already has some fantastic two-row crossover sport utility vehicles.

Our list will focus on how well these vehicles perform as electric vehicles. We will also evaluate these EVs based on cargo volume, spare tire status, all-wheel-drive options, and towing capability.

Here is our list of the best EV crossover SUVs you can buy today. 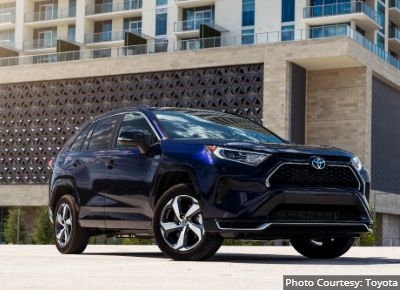 Toyota’s five-passenger RAV4 Prime PHEV is presently America’s second-fastest-selling vehicle in America and the only vehicle with a plug in the top ten. Shoppers are clamoring for hard-to-find RAV4 Primes, and dealers are tacking on $10K or more in market adjustments in many states.

The RAV4 Prime is a true midsize SUV. In addition to having a three-motor all-wheel drive system, the RAV4 Prime has a towing rating of 2,500 pounds, a roof made of metal on some trims, and every Toyota build leaves the factory with a spare tire. 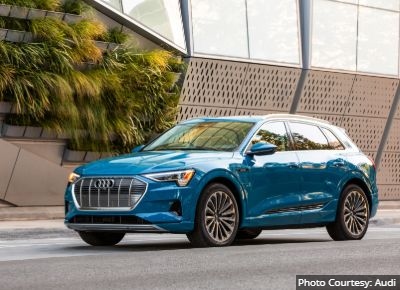 Audi’s e-tron may not be the best EV made today, but it is easy to call it one of the best electric crossover SUVs made. The e-tron has the best towing rating on our list and has a spare tire. Its five-passenger, four-door hatchback design is convenient, and its 54 cubic feet of cargo volume is more than acceptable for many compact SUV buyers.

Fans of the Audi brand looking to go electric will be very pleased with what the e-tron offers. Look for the e-tron name to expand and be applied to various other body styles in the coming year. 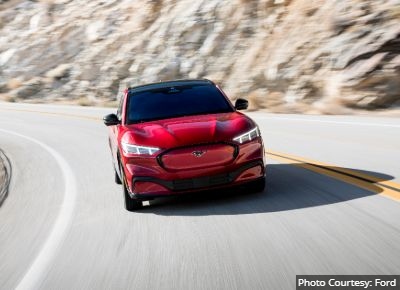 The Ford Mustang Mach-E is a five-passenger four-door hatchback small SUV with an emphasis on carlike features. While the name has some Mustang purists in an uproar, our go-to expert on the Mustang, Jimmy Dinsmore, literally wrote the book on Mustangs, and the Mach-E won him over after a test.

Our pick from the Mustang Mach-E line is the extended-range all-wheel-drive trim. In our back-to-back testing with the Tesla Model Y, the Mustang Mach-E scored higher in refinement, infotainment, and ride quality. The Mach-E has a sporty demeanor for sure.

The Mustang  Mach-E is not rated for towing, many of those produced have an all-glass roof, and none of the Mach-Es built have a spare tire. 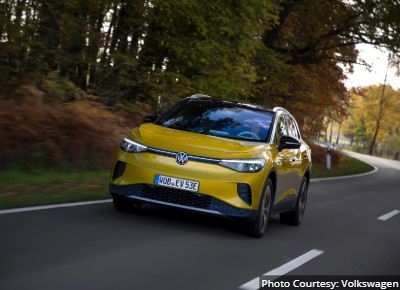 Volkswagen has been working hard on its electric vehicle portfolio in other markets, and its new compact-size ID.4 arrives ready to compete with the best electric crossovers in the world. The ID.4 is similar to the Mustang Mach-E in its lean towards car-like abilities. The initial 1st Edition sold out quickly, and the Pro S is rear-drive only. VW plans an AWD ID.4 in later years.

The ID.4 offers a wide range of prices that many might call affordable. VW created a network of EV chargers, though they are all shared with any EV owner who wishes to use one. The ID.4 is new to the market as of this story’s publication, but VW has promised a respectable volume of ID.4 cars for the U.S. market in 2021. 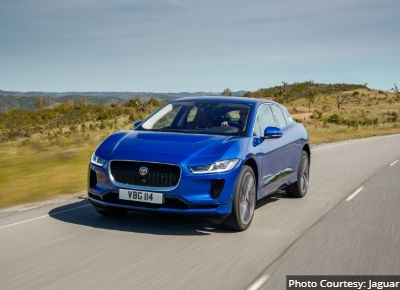 Of all the brands to pioneer a midsize SUV, it was Jaguar that first built and shipped one. The I-PACE is one of our overall favorite vehicles, not just a favorite EV, and hands-down our favorite Jaguar. The I-PACE is a high-performance vehicle with standard AWD and a luxury feel not found in the other crossover SUVs on our best-of list.

The I-PACE is a five-passenger four-door hatchback like the Mustang Mach-E. It drives like a Jaguar, meaning it is competent on or off a racetrack, and it shines on back-country roads. Its standard AWD system makes this a true four-season vehicle.

The I-PACE is a car-like crossover we hesitate to call an SUV. It is not rated for towing and has a glass roof.

You may qualify for additional deals and incentives, check out this month's Jaguar deals here. 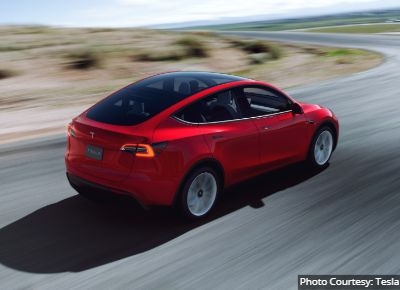 Tesla’s Model Y is one of the top-selling battery-electric crossovers in America. Based on Tesla’s hugely successful Model 3 sedan, the Model Y adds a bit of ride height and a lot more cargo area. For many EV shoppers, the Tesla Model Y is the industry benchmark in the two-row small SUV class. Breaking new ground for the crossover segment, the Model Y also offers an optional compact third row with two seats well-suited to children.

Like all Teslas, the Model Y qualifies for Supercharger use. Tesla’s captive charging stations are popular in some parts of the U.S., but few and far between in other regions. The Model Y will also have a Full Self Driving subscription service available at some point if Tesla eventually perfects the driver-assist technology.

The Model Y offers snappy off-the-line acceleration, and its Performance trim is extremely fast. We found the ride to be overly stiff, a sentiment seconded by Consumer Reports in its testing. Consumer Reports also red-flagged the Model Y for quality issues. Those may someday be resolved, but for now, Tesla remains at the bottom of many quality rankings, including J.D. Powers’ Dependability Study.

What is the best electric crossover SUV?

The Toyota RAV4 Prime PHEV is one of the best-selling vehicles in America. However, because of the limited availability, some dealers are marking up the price.

Which electric crossover SUV is the most reliable?

The Toyota RAV4 Prime, with its low maintenance design, has solid reliability ratings. It tops the Consumer Reports lists when analyzing the repair and maintenance costs.

Which electric crossover SUV has the best range?

What is the best luxury electric crossover?

The Jaguar I-PACE is one of the best luxury electric crossovers. It has an EV range of 234 miles and offers high performance with a luxury feel.