Even in this era of remote work, it's an inescapable reality that we have to travel on a frequent or daily basis. And when you trace that route every day, you want to do so in a car that is, above all, cheap to run.

We looked at the market to find the best affordable cars and crossovers with the cheapest running costs. That doesn't just mean a low sticker price and thrifty fuel economy, though these were certainly two of the most important criteria we weighed. We also considered reputations for longevity and the general cost of upkeep.

Of course, we considered contenders for this list from a holistic standpoint as well. An economical and reliable car isn't fun if it isn't comfortable, roomy, or generally enjoyable. 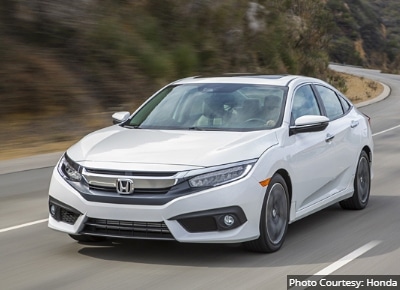 The Civic is one of the most proven, robust, livable, and enjoyable compact sedans on the market. You can pick up a base model for less than $22,000, yet the car is no penalty box. On the contrary, Honda's quality materials, zippy powertrains, and masterful use of space leave this as one of the most desirable cheap cars you can buy.

The Civic is currently in flux as of this writing, with an all-new 2022 model slated to replace the outgoing 2021s. The new model brings refined styling and a modernized, classed-up cabin. What remains? The excellent driving dynamics and a carryover pair of powertrains.

The base engine is a 158-horsepower 2.0-liter inline-four. Without a turbocharger, it doesn't make for the fastest Civic around, but it can achieve more than 40 mpg on the interstate. The optional choice is a friskier turbo 1.5-liter four-cylinder that now features 180 horsepower. It'll return 31 mpg city and 38 mpg highway, per the EPA.

The economical engines pair up to a willing chassis that has long made the Civic one of the most fun cars in its class. That fun can be had in a choice of body styles, too: the more practical hatchback or the classic sedan. The sporty Civic Si and the riotous, 300-horse Type R should follow the mainstream models shortly.

The Takeaway: Affordable, efficient, fun, and with a reputation for reliability, the Civic delivers on all fronts. It's an excellent choice for those who need a cheap and robust little car they won't tire of on the daily commute.

You may qualify for additional deals and incentives, check out this month's Honda deals and the average prices paid. 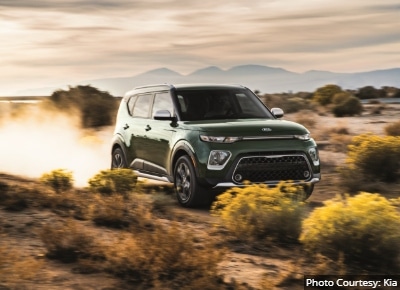 The Kia Soul is the mascot of cheap and cheerful. You can pick one for less than $20,000, a modest sum that buys a car with great styling, a cheeky personality, and all the features and build quality of something more expensive. The Soul doesn't try to be a luxury car, instead aiming to blend novelty with a generous feature count. We're smitten with it-few cars on the low end of the market dare to mix this much pragmaticism with this much, well, soul.

The funky Kia gets its power from a standard 2.0-liter four-cylinder that makes 147 horsepower. Only the front wheels are driven; there is no all-wheel drive even available as an option. The same is true for the optional turbo-four that makes 201 horsepower. The base engine uses a CVT, while the optional powerplant gets a seven-speed automatic. If you want a manual, find yourself a base 2021 model while you can, as Kia just announced the row-your-own option is being discontinued.

With front-wheel drive, modest four-cylinder power, and a small footprint, the Soul has no trouble returning up to 35 mpg on the highway. In the city, expect 27 mpg. Combined driving is about 30 mpg with either powertrain. All these figures are competitive with some of the other small crossovers on the market, though without a hybrid option you won't expect to outperform rivals like Kia's own Kona hybrid.

The Soul's boxy shape gives the interior an impressive amount of space, both for passengers and cargo: expect 36 inches of rear legroom and 24 cubic feet of cargo space behind the rear seats. That, along with a friendly, usable interior that feels tailored for unglamorous daily driving, clinches the deal for us.

The Takeaway: If you don't have a big budget but want something with personality and practicality in spades, this is your choice. 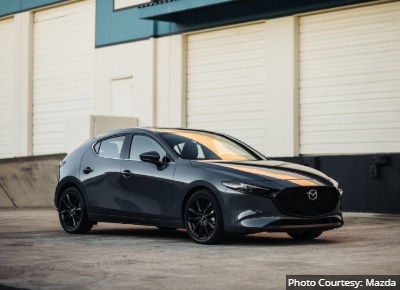 Looking for a bit of luxury on a pauper’s budget? The Mazda 3 might be your style of cheap commuter. Admittedly, it is a bit expensive for a small car - base models begin around $23,000, and loaded models reach $30,000 - but the price point feels merited once you spend some time with this snazzy hatchback or sedan.

Just take a look at the cabin, for starters. It’s an elegant affair that features a lovely, just-right three-spoke steering wheel, a horizontally-oriented dashboard (that feels rather Germanic), and quality materials throughout. Will you think it’s a Mercedes? No. But among compacts, it stands out.

The one drawback we see is the automatic shifter - a dated drumstick affair attached to an equally dated six-speed gearbox. Mazda has been a six-speed holdout for some time now, even as the vast majority of the industry has gone to eight-speed (or more) automatics. It isn’t that this is a bad gearbox, but a couple extra gears would help make the most of the 155-horse 2.5-liter inline-four under the hood.

Despite this flaw, the Mazda is an otherwise enjoyable car that’s easy to flick around, great to spend time in, and surprisingly elegant in the more popular hatchback form. The EPA estimates up to 28 mpg city and 36 mpg highway, so anyone with a reasonable commute won’t be stopping daily at the pump.

The Takeaway: If you want a whiff of luxury without the price and maintenance costs, the fun, stylish, and comfortable Mazda3 delivers.

You may qualify for additional deals and incentives, check out this month's Mazda deals and the average prices paid. 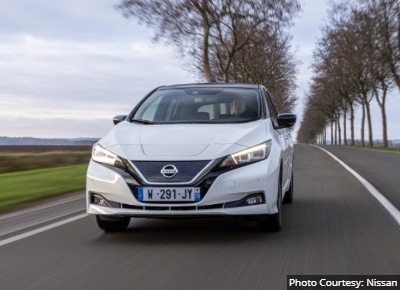 With electric cars becoming more and more mainstream, the Nissan Leaf is suddenly looking a lot more appealing than it used to be. Chief among the Leaf’s appeal is a new, reduced base price to just $28,375 before any federal rebates or tax credits. And because Nissan still qualifies for the full $7,500 electric-vehicle tax credit, the out-the-door price of a new base-model Leaf is about $21,000. Among electric vehicles, that’s a deal.

One common complaint against the Leaf is range, and we can’t deny that the competition largely exceeds the standard 149-mile range. Even the Leaf’s optional 226-mile range trails many of its rivals. But this article isn’t about the best road-trip cars; it’s about the best commuters. And as most people aren’t commuting more than 30 miles one way, the Leaf’s range is more than enough for getting to the office.

With 240-volt charging, buyers can charge the standard 40 kWh battery in about seven hours. The larger 62 kWh battery used with the long-range model takes about 11 hours to juice up. If you’re in a hurry, fast-charging stations can provide an 80 percent charge in roughly 30 minutes.

When it comes to real-world practicality, the Leaf covers all its bases. Infotainment is provided by an 8.0-inch touchscreen with Apple CarPlay. The dash features a 7.0-inch driver information center with configurable displays. A wealth of active-safety features come standard. Cargo space measures 24 cubic feet with the seats in place and 30 cubes with the rears folded. Those last figures are better than most other small, entry-level electrics, including the Tesla Model 3.

And maybe the best thing about the Leaf? Almost no maintenance. Forget about oil changes or spark plugs or timing belts - being electric, the Leaf has none of that. Just keep an eye on brakes, tires, and the suspension and you’re good to go.

The Takeaway: Other electric vehicles offer more range, but the Leaf can’t be beaten when it comes to being cheap, roomy, and economical. If you have a short commute and aren’t prone to range anxiety, the Leaf might be the cheapest of any cheap new commuter car.

From a running costs standpoint, a Nissan Leaf - it doesn’t cost much to buy, and it won't’ need gas or even any of the typical maintenance required by an internal combustion engine. Buy it slightly used and you’re even more in the black, as the Leaf - like most electric cars - typically has a steeper depreciation curve.

If you aren’t ready to go electric, the Honda Civic is the most well-rounded, versatile, and enjoyable cheap car on the market. There’s little to not like about this affordable mainstay.

What is the most reliable commuter car?

The Honda Civic and Toyota Corolla are your best bets from a reliability standpoint. They constantly rank among the most dependable choices on the market, and you’ll find plenty still rolling with well over six figures on the odometer.

What’s the most efficient commuter car?

If you’re willing to go electric, something like the Nissan Leaf (104 MPGe combined) or Chevrolet Bolt (120 MPGe combined). Gas models that would be the most efficient include the Toyota Prius and Hyundai Ioniq, and both offer up to 58 mpg city.

Is a sedan or crossover better to commute in?

Many prefer the crossover’s higher seating position and center of gravity, but we prefer a car for commuting, largely for its superior fuel efficiency. Even today, as crossovers get better and better fuel economy, similarly-sized sedans are often still more efficient.

What is the best cheap commuter car?

From a running costs standpoint, a Nissan Leaf - it doesn’t cost much to buy, and it won't need gas or even any of the typical maintenance required by an internal combustion engine.