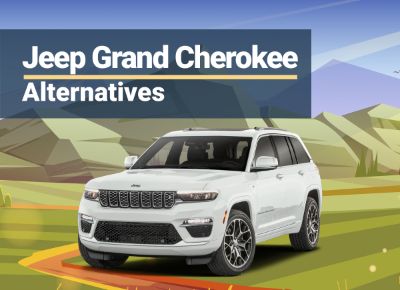 In the three decades since it was first introduced, the Jeep Grand Cherokee has earned a reputation as a rugged, all-purpose SUV whose crowning achievement is how elegantly it navigates a sweet spot between family car convenience and adventure-ready capability.

That hasn’t stopped competitors, like the Kia Telluride or Honda Passport, from seeking to usurp the throne. Let's see how they stack up.

(Editor’s Note: The Grand Cherokee WK is built on an older platform and is not included in this comparison.) 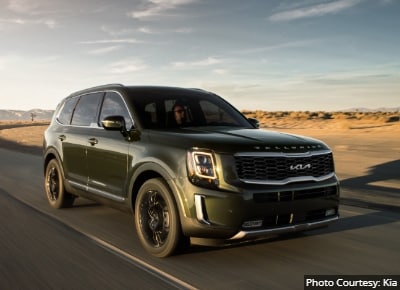 Since its launch just three years ago, the Kia Telluride has proven itself to be a formidable challenger, garnering a slew of awards and logging 36 percent of the sales volume of the Grand Cherokee. Impressive for a newcomer, but a testament to how likable this 8-passenger, three-row SUV has quickly become.

Granted, it doesn’t offer the range of choices one finds in the Jeep, but it certainly offers an appealing combination of power, style, and utility. With a 291 horsepower V6 as the Telluride’s go-to engine, performance is comparable to the Grand Cherokee’s 293 horsepower V6. Towing falls off comparatively to 5,000 pounds, but that’s enough for many light trailer needs. Meanwhile, the cabin is spacious and presents an appealing upmarket sensibility. You would have to go up to the Grand Cherokee L editions for a good match.

Front-wheel drive and all-wheel-drive configurations are available, and this is where you’ll find a significant difference with the Grand Cherokee. Light off-road duty is the level of capability to expect with the Telluride. All-wheel drive is an asset in bad weather, but it’s not the drivetrain you’ll want to slog through muddy woodland roads or rock-strewn backcountry pathways. Eight inches of ground clearance is standard in this Kia, whereas the Jeep GC offers a range from 8.4 to 11.3 inches depending on trim.

The Takeaway: The Telluride can go head-to-head with some Grand Cherokee offerings, and it makes a comfortable, well-purposed family vehicle that’s earned high marks for safety. But, if one intends to take the rugged road to the wilderness, there are limits to the Telluride’s readiness. 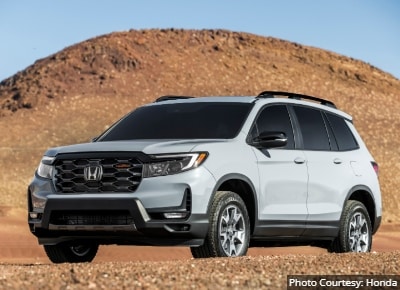 Three years ago, the Honda Passport returned after a 17-year hiatus, entering a fierce ongoing competition for mid-size SUV customers. There are two fronts to this battle: providing buyers with a comfortable utility vehicle for the family and building a rugged go-anywhere vehicle that’s ready for adventure. The Passport aims to thread its way between these two.

However, any rivalry that includes the Jeep Grand Cherokee is going to be defined by ruggedness. So, Honda has stepped up to the plate in 2022 to meet that challenge, giving the Passport a new, amped up exterior design that’s more in line with the model’s off-road personality. But is it enough? It depends on how far off-road you intend to go.

Overall, the Honda keeps trim choices to a minimum with the Passport, offering just three: the base EX-L, the adventurous TrailSport, and the premium-equipped Elite. The EX-L is available with either front-wheel drive or all-wheel drive, while the other two trims are AWD only. Clearly, the AWD editions are more suited for going off-pavement, not only for the traction advantage but also for having 8.1 inches of ground clearance, just over a half-inch more than the 2WD model. Towing with the AWD models matches that of the Telluride.

The Takeaway: In many ways, the Passport is like a 5-passenger version of the Telluride. Safety technology excels, interior conveniences are extensive and light off-road capability is notable. Nevertheless, it’s no match for the rough and tumble of scrambling over boulders. 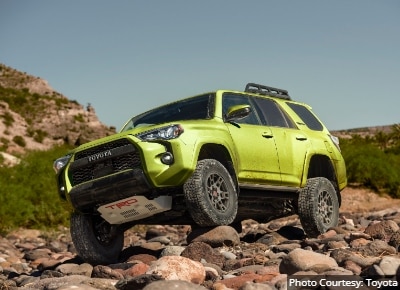 Because of its body-on-frame underpinnings, some might argue that the Toyota 4Runner is best compared with the Jeep Wrangler Unlimited. Fair enough. But we see the 4Runner as having more in common with the Grand Cherokee than the Highlander, Toyota’s mid-size crossover SUV. This is especially true when matching up the higher trims.

Sure, there’s a bit more on-road comfort in the Grand Cherokee, but if one is willing to forego the stiffer ride, the 4Runner brings a ton of ruggedness to the bargaining table. Not only are there rear-wheel drive or four-wheel drive trims in the lineup, as with the Jeep, but there’s some very remarkable off-road technology to be had for serious wilderness drivers. Trail-rated trims get crawl control to regulate speed in difficult off-road situations and a locking rear differential. Skid plates and an off-road modified suspension is also available. Ground clearance tops out at 9.6 inches in select trims.

Inside, the 4Runner can turn on the charm as well. Besides conventional amenities such as a power driver’s seats, 8-inch touchscreen, mobile phone app integration and both DC and AC power outlets, premium niceties can be found in the upper trims. Depending on your budget, features to look for include heated and ventilated front seats, a 15-speaker audio system, and advanced safety tech including collision mitigation.

The Takeaway: If getting way off the beaten path is in your plan, the 4Runner will not disappoint, and it can be outfitted quite nicely. For an everyday driver, though, you’ll need a big fuel budget and be willing to take a few bumps in the road a little harder. 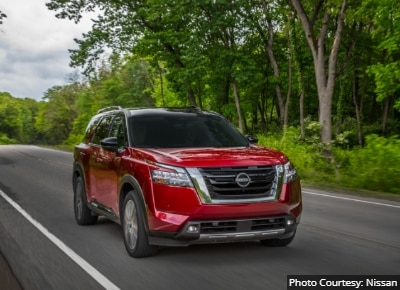 Redesigned for the 2022 model year, the Nissan Pathfinder hits all the key marks in this comparison. Competitively priced and equipped with a 284 horsepower V6 engine paired with a new 9-speed transmission, this three-row entry boasts a 27-mpg highway rating in select four-wheel drive editions. In addition, models equipped with 4WD get a 7-position Drive and Terrain Mode Selector making light off-road duty easy to manage. Front-wheel drive configurations are also offered.

Those that need trailering capability will find the 6,000-pound towing capacity suitable for typical boating, ATV, and camp trailer adventures, and safer, too, thanks to standard trailer sway control. Plus, suspension and improved structural stiffness have elevated driving comfort and confidence.

Head-to-head, it’s a worthy competitor if matched up with the Grand Cherokee L Laredo, Altitude, or Limited trims. The higher (and more expensive) Jeep trims have a clear edge when it comes to a more rugged off-road experience. This is evident in Nissan’s expectations, having provided the Pathfinder with only just over seven inches of ground clearance. Nevertheless, higher trims in the Nissan come well-equipped and feature climate-controlled front seats, a 9-inch infotainment display, and a full suite of high-tech safety systems.

The Takeaway: One of the reasons crossovers became so popular is that they offer utility vehicle flexibility yet handle more like a car and provide lots of family-friendly conveniences. This is exactly what makes the Pathfinder competitive, especially in this new generation model.

What vehicle is the best alternative to the Jeep Grand Cherokee?

If you have no plans for going into the deep outback, the Passport has a lot to offer. Closely compare the Toyota 4Runner if your aim is to do a lot of serious off-roading. If you plan to accommodate more than five passengers, then pit the Grand Cherokee L up against the Telluride or Pathfinder.

Generally, AWD systems are fully automatic, detecting a loss of traction and sending power to the wheels where it does the most good. Four-wheel drive systems tend to be more robust and are more suitable for use on rugged terrain and in extreme conditions such as deep snow. Often, 4WD systems have low and high ranges that are driver-selectable. The low range setting provides maximum traction to all four wheels.

How important is the tow rating of a crossover/SUV?

If you plan on towing anything with your vehicle, paying attention to its tow rating is critical. The ratings are based on the structural dynamics of the vehicle. Exceeding the rating is dangerous, not only for the loss of vehicle control that can occur, but also the increased likelihood of causing damage to the vehicle’s suspension system.