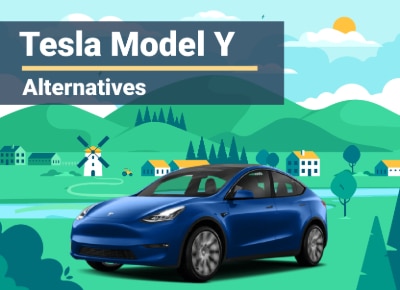 The mid-size Tesla Model Y SUV is the best-selling electric vehicle by a long shot, commanding 33 percent of the EV market. For now, the 2023 model carries over, but expect updates to roll out through the year in typical Tesla fashion.

The Model Y’s closest non-Tesla competitor is the Ford Mustang Mach-E. Meanwhile, new arrivals are coming on strong, especially the Kia EV6 and Hyundai IONIQ 5 cousins, which together are showing more sales than the Mach-E.

The Takeaway: Braced by the introduction of a slew of new models across the gamut, 2022 was a watershed year for EV sales, showing a better than 70 percent increase over the previous year. Throughout, Tesla has maintained its lead role and demonstrated with the Model Y that emissions-free, long-range driving is not exclusive to a six-figure luxury car marketplace. 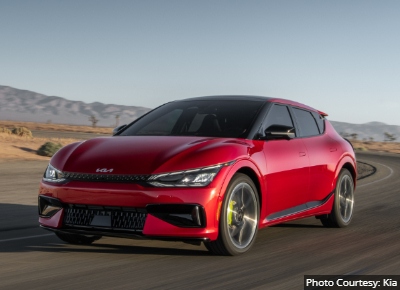 The Kia EV6 rides on the Hyundai E-GMP platform that was specifically developed for electric vehicles. As such, it has a lot in common with the Hyundai IONIQ 5 SUV. Both compare well with the Tesla Model Y, but with the EV6’s new 576-horsepower GT trim, the Kia is a better matchup from a high-performance perspective.

Competitive features include heated and ventilated seats, an 8-way power driver and passenger seats, a premium 14-speaker Meridian sound system, and Apple CarPlay and Android Auto integration – all standard. Then there are the cutting-edge safety and driver assist systems, including forward collision-avoidance assist with junction turning detection, and navigation-based smart cruise control that couples with highway assist to compare with Tesla’s ballyhooed AutoPilot.

All of this would be window dressing if not for the EV6 having gotten the range and efficiency up to meet the competition. True, the goalposts keep shifting when it comes to range, but the EV6 being able to achieve 310 miles should satisfy those who have contended that range anxiety keeps them away from an EV purchase. Opting for AWD will drop that number a bit, but mindful driving to maximize range can win it all back.

On the other hand, if all-out horsepower is what one seeks, the performance EV6 GT will bring you more than enough horsepower and torque to distance the Model Y off the line, but range will be significantly sacrificed.

The Takeaway: Want an electric vehicle that’s efficient, quick, well-equipped and with plenty of range, but not willing to spend over $60,000 for it? Then the Kia EV6 deserves your attention. 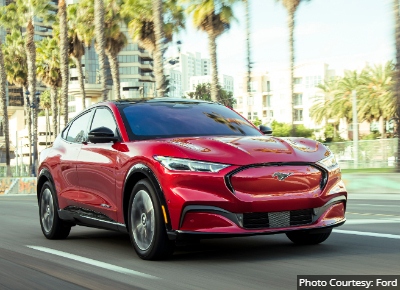 If one needs a benchmark to gauge how intense the competition has become in this segment, look no further than the Ford Mustang Mach-E. Three years now into production, this SUV has come off a banner year that places the vehicle third in U.S. EV sales. Surely, in tagging their first mass-production all-electric SUV with one of the automaker’s most prestigious monikers, Ford was not horsing around.

No question though, there are trade-offs. Where the Mach-E trails the Model Y in fuel economy, it delivers a more comfortable ride than the Tesla; where it takes a bit longer to charge, it scores better in reliability. Even if comfort and reliability are not as definitively quantifiable as fuel economy and charging time, on an everyday basis, would you prefer them?

Not that the charging time disparities are inconsequential. For the Mach-E to get to 80% of full charge in 45 minutes is clearly on the slow side of the competition. However, this is not necessarily as unfavorable as it seems if one reconsiders their charging strategy. Observe that with gasoline, filling up is convenient because there is ordinarily no way to fill up while the vehicle sits idle at home or at work. Not so with an EV. Consequently, one might need to add just 60 miles of charge at a Level III charger, which will take about 10 minutes in the Mach-E, and then finish charging up when the vehicle is parked at the Level II charger you’ve installed at home or that your employer provides at your work location.

More important to recognize is that the Mach-E can travel 312 miles on a full charge in the AWD California Route 1 trim, which features an extended-range battery. It’s one of the many more Mach-E trim and configuration choices than those offered by the Model Y. For most travelers, commuters, and daily drivers, 300 miles of charge is more than enough to get through the day.

The Takeaway: Put aside preconceptions about what being a Mustang means and take a fresh look at this vehicle. It offers quick performance, attractive styling, and upmarket comfort in an emissions-free SUV with pricing that starts at under $50-thousand dollars before tax credit incentives that could put $7,500 back into your savings account. 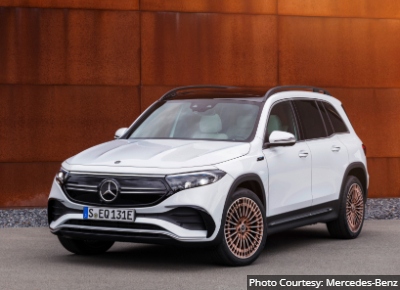 Although it’s not built on an EV-specific platform, the Mercedes-Benz EQB is definitively an all-electric contender in this comparison and is the most economical Mercedes-Benz EQ EV currently available. For 2023, the EQB is available in three versions, having added a front-wheel drive EQB 250+ model to the lineup.

Offering Mercedes-level quality in a mid-size SUV with an optional 7-seat configuration, the EQB aims squarely at the potential Model Y buyer with children in tow. Plus, there’s such a close similarity feature-wise to the gasoline-powered GLB model on which the EQB is based that there’s an enticing Mercedes familiarity for the shopper who might be on the fence about going electric.

Of the three EQB model variants, the EQB 300 4MATIC comes best prepared for the competition based on its combination of driving range and power, offering an estimated 243-mile range and 225 horsepower. By themselves, these figures would leave the EQB short of the mark going head-to-head with the Model Y, but where the EQB really shines in this comparison is comfort and dependability.

Feature-wise, the 10.25-inch cluster and media displays are right-sized for the vehicle and employ the new generation Mercedes user interface. Safety features include lane-keeping assist, blind spot assist, and active brake assist. Advancing to the Pinnacle trim, which is available at each model level, adds the exquisite Burmester surround sound system.

The Takeaway: One might need to put away the spec sheets to fully appreciate what the EQB brings to this competition. For the price, there’s really no comparison.

You may qualify for additional deals and incentives, check out this month's Mercedes-Benz deals and average prices paid. 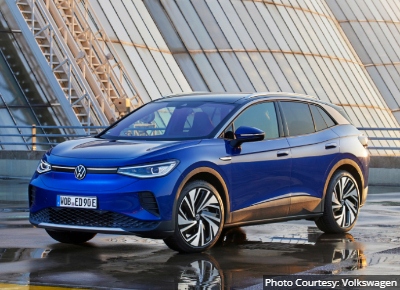 From a pricing perspective, the ID.4 crushes the other four vehicles in this comparison with its $37,495 entry point. Granted, the low-end tradeoff is that range is a paltry 209 miles. This alone will likely drive many car buyers to aim for a higher trim of the ID.4 lineup, where range quickly gets a jolt to 275 miles with a longer-range battery.

Even so, pricing still beats the nearest competitor even at that level. For example, an ID.4 Pro with an 82kWh long-range battery checks in at $42,495. One could even move up to the ID.4 Pro with AWD at $46,295 and still not hit the entry cost of any of the others.

Of course, there’s more to making a purchase decision than price. Nevertheless, Volkswagen still manages to stay in the game by offering plenty of upmarket niceties despite the economy-minded pricing. Standard features such as roof rails, heated seats, a 12-inch touchscreen, and wireless phone charging elevate the ID.4 to competitive status. Sweetening the deal are three years of unlimited 30-minute charging sessions at Electrify America DC fast chargers.

The Takeaway: Though some might argue that the ID.4 is out of its class in this comparison, we would disagree. Look deep into the ID.4 lineup and discover that a fully loaded ID.4 AWD Pro S Plus steps up to this emissions-free challenge while saving plenty of greenbacks.

What vehicle is the best alternative to the Tesla Model Y?

This comparison gives you a starting point to research the range of all-electric SUVs now being manufactured. All the SUVs in this comparison are excellent alternatives to the Model Y for a variety of different reasons. The vehicle that will best meet your needs and expectations is ultimately up to you to decide. We recommend starting your search with the Ford Mach-E.

No. There are more EV SUV choices than ever before. In the small to mid-size SUV group, buyers can find an all-electric SUV for under $40K but expect to spend more if the maximum range is the deciding factor.