Hyundai IONIQ 5 vs Kia EV6: Which Electric SUV Should I Buy? 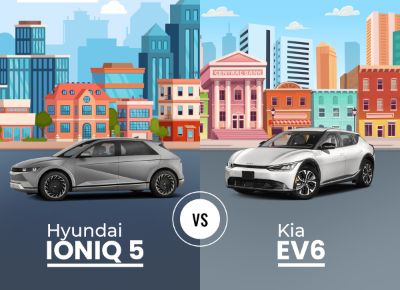 It would be so easy to call the Hyundai INOIQ 5 and the KIA EV6 twins and leave it at that. After all, they do share the same all-electric platform, utilize the same motor and battery systems, and were released to the automotive marketplace as compact crossover SUVs at nearly the same time.

But dig into the DNA of these models a little deeper, and some important differences emerge. Calling them first cousins might be more appropriate. 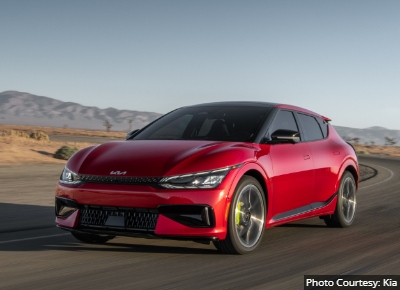 There was a time not long ago when it was easy to spot an SUV by its outward appearance. Over the decades, as the popularity of family-friendly utility vehicles grew, the term SUV broadened considerably. Consequently, referencing the IONIQ 5 and the EV6 as SUVs will hardly ruffle anyone’s feathers, even though one could easily mistake the IONIQ 5 for a hatchback or the EV6 for a modernized version of a small station wagon, and not be far off the mark.

From a dimensional point of view, what sticks out most obviously is that the IONIQ 5 is taller than the EV6. It’s not much, but it’s enough to see them as striving to define distinctly different personalities. Furthering the point, there’s a small window behind the C-pillar on the EV6 that’s decidedly wagon-like, while the IONIQ 5 stylistically carries forth Hyundai’s 1990s-era hatchback Pony model’s legacy bringing it into the electrified realm of the 21st century.

Interestingly, the EV6 travels with a nearly 4-inch shorter wheelbase than the IONIQ 5. One might think that would scrunch up legroom for the occupants, but that’s not the case. It’s actually a tad lengthier up front in the Kia. However, where the difference in dimensions noticeably shows up is in cargo space. Since both vehicles exhibit short exterior overhangs, the Hyundai’s four extra inches of wheelbase (plus the height advantage) gives it nearly nine cubic feet more space to put stuff when you fold down the rear seats.

The Takeaway: Although the volume of all-electric vehicle sales still hovers below 10 percent, buyers are showing increasing interest in ownership. If anything, these two SUVs are set to ride the wave that takes sales well above that number. They may be marginally different from each other, but they’re cut from the same cloth, and have the sort of curb appeal that moves hearts and minds… and opens wallets. 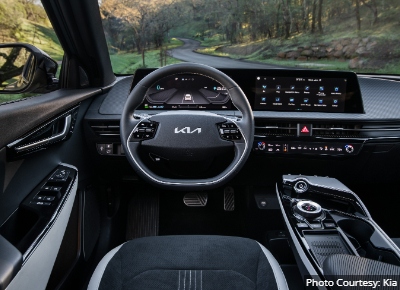 Similarities between the IONIQ 5 and the EV6 continue with the interior, most notably the dual 12.3-inch display screens that fan out before the driver. However, the Hyundai design feels a bit more stylized and refined in a modern way. The difference amounts to nothing more than the Kia aiming for an audience that seeks a more traditional sporty look and feel.

Nevertheless, the IONIQ 5 benefits from its hatchback profile in creating a more open interior vibe. Plus, there are a few devils in the details, too.

More than one consumer has expressed frustration with vehicles that have abandoned tactile knobs in favor of touch or sliding controls. Strangely, the EV6 goes a step further down that road by doubling up its entertainment and climate control functions into a single panel that must be switched back and forth to gain control. If one reaches for the volume knob while the panel is in climate mode, you’ll change the temperature setting instead. The IONIQ 5 keeps them separate, with volume adjusted via a knob, but climate by touch. Fortunately, each provides volume control on the steering wheel, too.

Although both models employ shift-by-wire functionality, the EV6 utilizes a rotary shift dial on the console, while the IONIQ 5 gets a stick dial on the steering column. Either way, the mechanisms are simple and straightforward to use, but the Hyundai method clearly plays to the overall uncluttered design ethos that leaves the central floor area up front completely open other than the cup holders wedged between the seats.

To its credit, the EV6 includes a 14-speaker premium audio system as standard, whereas one needs to move up trim levels to the Limited in the IONIQ 5 to find its premium Bose audio offering.

The Takeaway: With a broad brush, one might conclude that, other than style, there isn’t much difference between the interiors of the IONIQ 5 and the EV6. Turns out that the Kia offers more up-market features such as premium audio, 8-way power driver and passenger seats, vegan leather seat trim, ventilated front seats, at every trim level except for the exclusive new ultra-performance GT model. Meanwhile, the IONIQ 5 feels spacious and more sophisticated though you’ll need to reach for the Limited trim to get all the goodies. 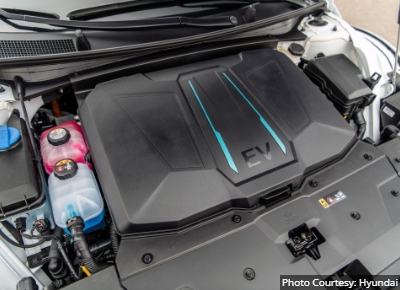 One of the benefits of utilizing the same Electric Global Modular Platform (E-GMP) is that the IONIQ 5 and EV6 share the same electric motor and lithium-ion battery system combinations in both brand’s rear-wheel drive and all-wheel drive variants. However, the best range and efficiency measurements are achieved in their respective RWD editions with the 77.4-kWh long-range battery. All-wheel drive models exclusively use the long-range battery, but with electric motors front and rear, they consume more energy.

Of the two models, the slightly more aerodynamic EV6 garners a driving range of 310 miles and a 117 MPGe rating in its long-range-battery equipped RWD editions. The similarly equipped IONIQ 5 posts a 303 range and 114 MPGe rating. The entry-level rear-wheel drive trims get a standard 58-kWh battery good for about 220 miles in the Hyundai or 232 miles in the Kia. Peak output of 320 horsepower is achieved in dual motor all-wheel drive editions from either automaker. For 2023 Kia has introduced a high-performance GT model (not to be confused with the GT-Line trim) capable of producing 576 horsepower.

The more important measurement for many buyers will be how fast they charge. In this, these two models are essentially equal and quick, delivering 10-to-80 percent charge in as little as 18 minutes courtesy of their 800-volt DC fast-charging architecture.

The Takeaway: While not exactly equal in performance, the shared powertrains of the IONIQ 5 and EV6 mirror each other. The wildcard here is the new-for-2023 GT AWD model from Kia with its mega-performance (576 hp) but conversely less range (206 miles) and efficiency (79 MPGe). 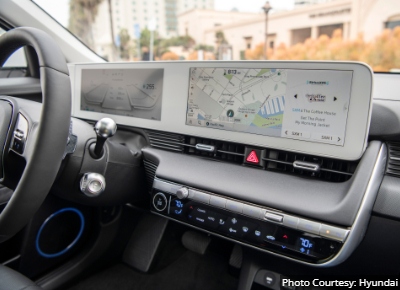 Safety equipment matches up equally in these two models. The only notable difference is that some essential advanced collision avoidance technology kicks in at a lower price with the IONIQ 5, given that it has a different trim structure than the EV6 now that Kia has dropped the Light trim from the lineup for 2023 and moved the mid-level Wind into the entry-point position.

However, Kia has provided optional extras in the Wind for 2023, such as Reverse Parking Collision-Avoidance Assist and a Blind Spot View Monitor in the instrument cluster. One would need to purchase the top-end Limited to access these features in the IONIQ 5.

Nevertheless, both provide a significant level of desirable accident-avoidance technology, including forward collision avoidance, blind spot detection, and lane-keeping assist, as well as structural safety built into the platform that has earned the IONIQ 5 a 2022 Top Safety Pick+ designation from the Insurance Institute for Highway Safety. Incidentally, the IIHS has conferred the same test results on the Kia EV6.

The warranties from each manufacturer are generous and quite similar, offering 10-year / 100,000-mile powertrain and EV battery coverage. However, the IONIQ 5 gets a 7-year / unlimited miles anti-perforation warranty, while the EV6 provides 5 years / 100,000 miles of rust-out coverage.

The Takeaway: All things considered, these vehicles are as close to equal on the safety front as identical twins. Look elsewhere to develop a reasonable preference for one over the other.

In this matchup, the choice comes down to which model you like better. Trim-for-trim pricing, in general is more favorable in the IONIQ 5. Across the board, there’s about a $1,000 difference between comparable trims. For example, the IONIQ 5 SEL Long Range with RWD posts a 2023 MSRP of $47,450, whereas the similarly equipped Kia Wind Long Range with RWD is tagged at $48,500.

While there is no definitive winner here, the EV6 has a marginal edge in terms of efficiency and range, while the IONIQ 5 earns a few extra points for comfort, utility, and style.

Which has more features, the IONIQ 5 or the EV6?

Neither. This collaboration between manufacturers seems to have been established on equal footing. It is with their respective stylistic approaches that these vehicles differ most. Consequently, the ride and handling vary a bit from one model to the other but not significantly.

Do EVs cost more than their traditionally powered counterparts?

Up front, yes, they are typically more expensive. However, with tax incentives and better efficiency, they ultimately should save an owner money. Plus, there is likely to be less maintenance costs since electric powertrains require less servicing. Ultimately, though, the greatest saving will be to the environment courtesy of their zero-emission powertrains.