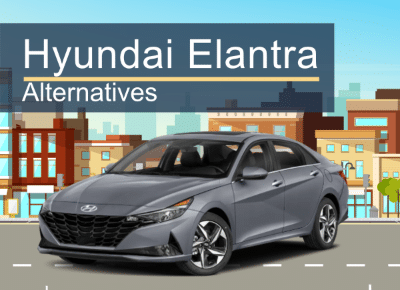 The Elantra sedan helped Hyundai establish itself as a mainstream brand in the United States.

This sedan stood out from the competition with an incredible warranty program, aggressive styling, and more technology bang-for-your-buck than many of the other vehicles in the segment.

If you are looking for an alternative to the Hyundai Elantra, we have compiled a list of the top compact sedans in the segment, highlighting where each shines brightest. 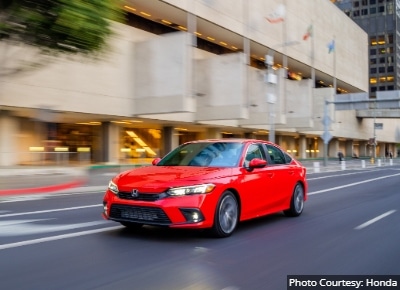 The Honda Civic has long been the most popular model in the segment, and in 2021, it ranked second to the Toyota Camry among all car sales in the United States. It is nearly identical to the Elantra in terms of interior space.

Like the Elantra, the Honda Civic comes with a standard 2.0-liter 4-cylinder engine, but with 158 horsepower, the Japanese sedan packs a bit more punch than the 147 horsepower Hyundai. The Civic offers slightly lesser fuel economy with the base engine, but unlike the Elantra, the Civic has a premium engine option. The turbocharged 1.5-liter mill delivers 180 horsepower, but it also offers the same 33 mpg around town and 42 mpg on the highway as the base Hyundai engine. It costs more but packs way more power and the same fuel economy.

The Takeaway: With the Honda Civic, you get more power and comparable fuel economy, but it will cost you at least 10% more for the base model. 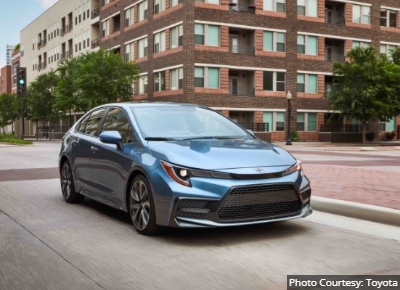 The Corolla is offered with two engines, with the base engine offering less horsepower than the standard 147-horsepower Elantra engine, while the premium Toyota engine offers more with 169 horsepower. The Corolla is offered with a 6-speed manual transmission, offering more fun-to-drive factor than the Continuously Variable Transmission (CVT), but for those who prefer to avoid shifting on their own, Toyota also offers a CVT. However, regardless of the engine or transmission choice, the Corolla offers significantly lower fuel economy than the Elantra, giving up at least 2 mpg around town and 4 mpg on the highway.

So the Toyota Corolla has a smaller interior, worse fuel economy, and less standard power, but it also has a higher starting price. Aside from the fun of the manual transmission, the key advantage of the Corolla is the spotless reputation for quality and value from the Toyota brand, which far exceeds the brand reputation of Hyundai.

The Takeaway: If you want a compact sedan with a manual transmission or the legendary brand quality of Toyota, the Corolla is a great option, but it trails the Elantra in just about every other category. 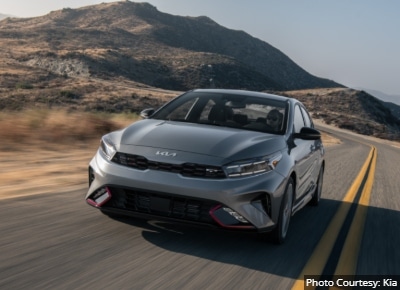 The Kia Forte sedan is the closest competitor to the Hyundai Elantra and that should come as little surprise, seeing as how the two are based on the same chassis. They also share an engine, transmission, and some interior bits, but the Kia has a sportier feel while the Hyundai has a more luxurious feel. The two differ in base price by less than a thousand dollars, with the Kia carrying the lower starting price.

The base engine in the Kia Forte is the same 2.0-liter engine that motivates the Elantra, sending 147 hp towards the front wheels by means of a CVT. The Forte is rated as getting slightly lesser fuel economy, but with numbers of 31 mpg around town and 41 on the highway, it ranks second among non-hybrid models in the segment. More importantly for those who want more driving excitement, the Forte is available with a turbocharged 1.6-liter engine with 201 horsepower – making it the most powerful non-performance model in the group. Also, the turbocharged engine comes with a dual-clutch automatic transmission rather than the CVT, which provides better driving dynamics.

One interesting difference between these two closely related Korean sedans is the layout of the interior space. The Forte has a slightly smaller cabin with 3.4 fewer cubic feet of space, but it has a larger cargo area, with more than an extra cubic foot in the trunk.

The Takeaway: The Kia Forte rides on the same chassis and relies on the same engine, making it very similar in base form, but unlike the Elantra, the optional turbocharged engine makes this the more entertaining of the two Korean sedans. 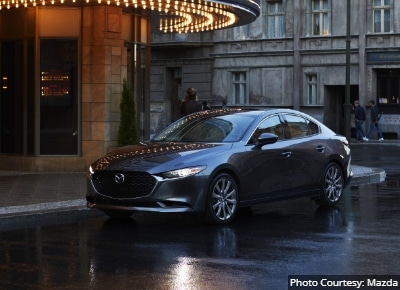 The Mazda 3 is one of the higher-priced models in our comparison, starting $850 higher than the Elantra, but that base price comes with more power and better driving dynamics. The Mazda also has a relatively unique exterior design, allowing it to stand out from the crowd a bit.

The Mazda 3 comes standard with a 2.0-liter engine with 155 horsepower, but there is also an optional 2.5-liter engine with 186 horsepower. Regardless of the engine chosen, the Mazda 3 comes with a 6-speed automatic transmission, which will appeal to the drivers who don’t like the feel of the CVT. While the Mazda offers more power and a more engaging transmission, it offers the worst fuel economy in our comparison with both its standard and premium engines.

In addition to getting fairly poor fuel economy, the Mazda 3 offers dramatically less interior space than the Elantra. The Mazda cabin is more than 6 cubic feet smaller than the Hyundai while the trunk space is a full cubic foot smaller. The Mazda 3 is also offered as a hatchback, so if you need more interior space and you are stuck on a sedan, the Mazda brand has other options, but not in sedan form.

The Takeaway: If you want the feel of a traditional automatic transmission and more power with both the standard and optional engine, the Mazda 3 is a great option, but it costs more and requires serious compromises in interior space and fuel economy. 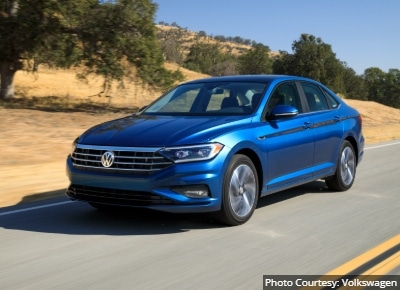 If you are looking to spend as little as possible at the dealership when buying your new compact sedan, the Volkswagen Jetta is the best option. With a base price of $18,995, it is the least expensive model in the segment, but it also packs a more fun-to-drive factor with standard turbocharged power and traditional transmission options.

The Volkswagen Jetta comes standard with a turbocharged 1.4-liter engine that offers the same 147 horsepower as the Elantra, but with 186 lb-ft of torque, it has a massive advantage over the 132 lb-ft from the Hyundai. The VW also offers the appealing feel of the turbocharged engine and the ability to row your own gears, but even if you opt for a self-shifting gearbox, the traditional 8-speed automatic will appeal to some buyers compared to the CVT. The VW is rated as getting slightly worse fuel economy than the Elantra, but with figures of 30 mpg around town and 41 mpg on the highway, it is one of the more fuel-friendly models in our comparison.

Where the Volkswagen Jetta falls the shortest against the Elantra is in interior space. The VW has almost 5 cubic feet less passenger space and slightly less trunk space. The Jetta also has milder styling inside and out, for those who don’t like the aggressive look of the Hyundai lineup.

The Takeaway: The Volkswagen Jetta is the best choice for anyone who is looking to pay the least at the dealership while still getting the most fun-to-drive factor without much compromise in fuel economy. It isn’t as flashy as the Elantra, but that appeals to some drivers.

What body types are offered for the current Hyundai Elantra?

The Hyundai Elantra is currently only offered as a sedan, although the company has offered 4-door wagon and 2-door coupe versions in past generations.

Which similar models to the Hyundai Elantra offer the most power?

Which similar models to the Hyundai Elantra offer the best fuel economy?

Which alternative to the Hyundai Elantra is the most affordable?

The Volkswagen Jetta has the lowest base price in the segment, starting at $18,995.