Top 12 Reasons Your Car Won’t Start, but the Battery Is Still Good 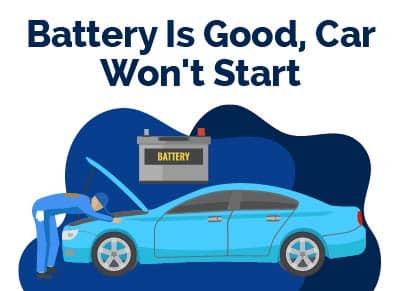 If your car doesn't start after you have checked its battery, there are several things that you can do to get it working again. Sometimes, minor issues, such as insufficient fuel can be the culprit.

Also, your car not starting might be because of a faulty fuse, timing belt, or bad battery cable connection. Before you can resolve the issue, it's essential that you first identify the cause of the problem.

Now, if your car won’t start but the battery is good, let’s most of the common causes of this issue.

Some factors can prevent your vehicle from starting even with regular car maintenance. This article explains the various reasons why it won't start.

These are the reasons why a car won't start, but the battery is good:

One of the most common reasons a car won't start is its batteries' loose or damaged cable connections. A corrosion issue in the battery terminal could be the cause.

To fix this, turn off your car and inspect the battery terminals. If they're loose, you need to twist and turn them to make them tight.

Although it's essential to inspect the battery terminals if they're not dirty or lose, it's also necessary to clean them before you can replace them or re-attach them.

Since this process can involve working with metal tools, hiring a professional is recommended.

If the battery terminals aren't loose but corroded, you need to clean them before you can replace them or re-attach them.

Since this process can involve working with metal tools, hiring a professional is essential.

A faulty alternator is one of the most common reasons a car won't start. This component is responsible for recharging the battery and distributing electricity to the vehicle.

Unfortunately, you have a terrible alternator if the car doesn't start, even if the battery is good.

The interior lights, like the dome light, may dim or go dim. If the check engine light or the battery symbol turns on, it's most likely because of the defective alternator.

You have a lousy alternator if the car doesn't start, even if the battery is good. An expert inspecting your vehicle will let you know if it needs a replacement.

3. Your Car Isn't in Park or Neutral

If your car is still in gear, it won't start. Move it to neutral or park it to check if this is the problem.

You can also try pushing the clutch pedal down if you have a manual transmission.

If the car still starts even though it's in drive gear, it might be because the neutral safety switch is defective.

Having a faulty switch can be very dangerous. If you need professional help, contact an auto repair shop right away.

A car fuse is essential for protecting your vehicle's electrical wiring. If it's damaged or defective, then the power will not be able to reach the starter relay, which is the part of the car responsible for supplying the spark and ignition.

Before starting a car repair job, ensure you have the owner's manual.

This will allow you to locate the fuse box. If you see a blown fuse, you should immediately contact a mechanic.

Another component that you should inspect if your car won't start is the fuel pump relay.

This component is an electrical component that's located in the fuse box. It's responsible for supplying the correct amount of fuel to the combustion chamber.

The fuse box has multiple relays that are used for different functions. If you have a faulty relay, you can easily confirm this issue by replacing them.

However, this method might not work if all relays are defective. In that case, you should have your fuel system checked by a professional mechanic.

The ignition switch is an electrical component that moves the power from the car's battery to the various components of the vehicle. If the switch is defective, the car won't start.

Although the ignition switch is not the most common cause for a car to stall, it can still go wrong.

One of the possible reasons why the car won't start is because the safety system is not working correctly.

This feature locks the steering wheel and can prevent the vehicle from accidentally moving.

If the ignition switch is constantly in the ON position, powering the fuel pump, it might be a sign that the switch is defective.

A lighter keychain is also an excellent way to preserve an ignition switch.

Doing so will allow you to carry it with fewer keys. In addition, doing so will protect the switch from strain when you insert the key.

If you think your car's ignition switch is defective, contact a professional mechanic to fix it immediately.

If the engine crank does not work when you press start, it could indicate that the key fob is defective, or the car's push-start system is not working correctly.

A dead key fob can prevent the car's button from receiving a signal from the key.

To replace the dead key fob, use a small screwdriver or coin to open the cover of the battery.

After you've identified the numbers on the battery, you can use a replacement part that matches the model. The new battery will look like a button or a coin.

The car's starter motor is a device that turns an internal combustion engine on and off using its power.

In addition, it has an electrical component called the starter solenoid, which transfers current from the battery to the device. If either of these components is broken, the car will not start.

When you start the car's engine, you might hear a clicking or a buzzing noise. You might have a faulty starter or solenoid if you notice these signs.

The air-fuel ratio and the spark are two of the most critical factors a car needs to start. Your vehicle should start if you have a good battery and sufficient fuel in the tank.

However, if you have a bad spark plug, it could prevent the vehicle from moving.

A distributor is a device that controls the electricity that flows through the spark plug. It draws a high current from the ignition coils to the plugs.

A distributor cap is a rotating arm or rotor covering the device's internal components.

These components protect the wires and the inner rotor from getting damaged. If the cap is not tightly secured, the spark will not travel.

Bad spark plug signs can be hard to spot, especially if your vehicle has other issues.

A professional inspecting your car's components can also help identify if you have lousy distributor caps or a damaged ignition coil.

The timing belt is an internal component of your car that controls the rotation of the engine's components.

If it fails, your vehicle will not start. Instead, you may hear the engine start but not turn over or hear a ticking sound under the hood.

Although this issue is uncommon, a timing belt might break while the car runs. The only solution is to have a replacement done by a mechanic.

Some cars have a timing chain instead of a belt. This type of component usually lasts longer than a rubber belt. However, if the chain breaks, you'll still have to get it fixed by a mechanic.

11. Not Enough Gas in the Fuel Tank

Although it may seem obvious, having insufficient fuel in the tank is one of the most common reasons a car won't start.

If you frequently see the amount of fuel you're getting to the point that it won't start, the fuel gauge may be broken.

Having it checked can also help identify other issues with the fuel system.

Sometimes, a car will not start when the engine is filled with fuel. This usually happens with older cars that have a carbureted engine.

If the excess fuel causes the spark plug to wet, the ignition system could be a problem. Try holding the gas to the floor while the engine is running.

A fuel filter is an essential component of your car's engine that helps remove dirt and debris from the fuel. It's designed to prevent these particles from entering the engine.

If the fuel filter is partially blocked, your car will still start. However, it won't allow you to start the vehicle if it's full of debris and rust. This issue can also occur with the fuel injection nozzle.

If you have low fuel pressure, it may prevent the engine from receiving the proper fuel from the tank.

Add high-quality gasoline to your vehicle's tank to minimize the risk of debris damaging the fuel system.