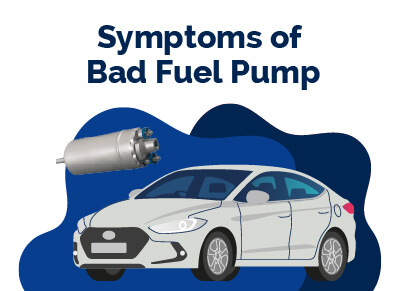 Most cars come with fuel pumps, which are designed to deliver fuel to the engine at the appropriate amount. When the key is turned on, the fuel pump begins to operate, producing a loud hum or a quiet whining sound.

Some cars come with electric fuel pumps, while others have mechanical fuel pumps. These are designed to deliver fuel to the engine at the appropriate amount. Any issues with these pumps can cause significant problems and affect the performance and drivability of a vehicle.

Some of the most common symptoms of a bad fuel pump include hard starting, whining noise from the fuel tank, the car not starting at all, loss of power, and a few others we will discuss.

How Does a Fuel Pump Work?

The fuel delivery system of a car works by delivering fuel to the engine from its tank. An electric fuel pump, usually located inside the tank, turns on when the car's engine is started.

The ECM then turns on the fuel pump relay, pressing the fuel through the metal piping.

In most cars, a second mechanical fuel pump is also used to boost the pressure in the engine. This component works by spraying fuel into the engine through fuel injectors, which are timed to deliver the fuel to the car's engine.

If the system works correctly, the car's engine will start and run smoothly.

What Happens When a Fuel Pump Goes Out?

If the fuel pump is failing, this could cause significant issues with the car's drivability and performance.

If the car's cylinders aren't getting enough fuel, then the engine may not be able to move forward.

Aside from poor performance, this issue could also affect your car's gas mileage.

Like most mechanical components, fuel pumps suddenly don't go bad. They give signs which are sometimes ignored. These are the symptoms of a bad fuel pump:

1. Whining Noise From the Fuel Tank

A loud howl or whining sound is one of the first signs that a car's fuel pump is failing. An old or worn fuel pump can cause this.

Usually, a quiet howl or whining sound is produced when the fuel pump is operating correctly.

However, a loud howl or whining sound could be caused by a problem with the fuel supply.

Another common symptom of a faulty or failing fuel pump is difficulty starting.

Since the fuel pump constantly runs when the ignition is turned on, it can eventually wear out and become weak.

This condition can cause the car to start slowly and take more turns. In most cases, this issue could also lead to the vehicle requiring multiple turns of the key to get started.

3. Loss of Power Under Stress

Another common symptom of a faulty or failing fuel pump is a loss of power. This issue can occur when the car is accelerating or driving while under stress.

The engine will stop working because the weak parts of the fuel pump can't keep up with the car's increased fuel demands.

If this happens while the car is moving, it can mean that the engine cannot provide the proper amount of power to its vehicle.

The failure of the fuel pump can also affect the car's ability to regulate its fuel pressure.

4. Car Will Not Start

Another common symptom of a faulty or failing fuel pump is a no-start condition. This issue can occur when the car cannot provide enough fuel to start.

Although the engine will still start if the key is pressed, it will not start because the car cannot provide enough fuel.

Having the vehicle appropriately diagnosed is very important to prevent this issue from happening in the first place.

The sudden surge of the vehicle can be caused by the irregular resistance within the fuel pump motor.

This type of issue can occur at random and consistent speeds. If this happens often, it could be caused by the fuel pump's problems.

Stalling at high temperatures is often caused by various factors, such as a faulty or failing fuel pump.

The fuel pump's deteriorating condition could cause this condition. If the car's temperature starts to rise with increasing regularity, this could mean that the fuel pump needs replacing.

A sputtering engine is one of the most common signs of a fuel pump issue. This can happen while the car is moving at high speeds.

It could be caused by the fuel pump's failure to provide the necessary fuel stream to the engine.

If you're filling up your vehicle more frequently than usual, it could be because of an issue with the fuel pump.

This could be caused by a valve not opening properly, which allows more fuel to be poured into the engine.

If the check engine light comes on, your fuel pump may fail. The car may start acting herky-jerky once the pump is off, which will be very noticeable to other drivers.

Always take the engine light on the dashboard seriously.

All types of vehicles equipped with internal combustion engines use fuel pumps.

Although most fuel pumps are built to last, when they age, they sometimes might not be able to provide the car with the proper amount of fuel.

One of the reasons why fuel pumps fail is that they are not regularly filling up the car's tank.

If you suspect that the fuel pump is failing, you must have it inspected by a professional. This will allow the technician to determine if the car needs to be replaced.

Getting dirty from the service station's last fill-up could affect fuel flow into the car's tank. This could cause the inlet screen to block or gum up the pump.

Late-model vehicles have complex fuel pumps that may not be able to provide the car with the proper amount of fuel.

If the pressure control and relief valves are not working correctly, the engine might not be able to get the fuel back into the tank.

A pebble can also damage the fuel lines, which could mimic the failure of a fuel pump. This condition is one of the most common reasons fuel pumps go bad.

If the fuel filter is not regularly replaced at regular intervals, it could cause it to become blocked with silt or water. This could restrict the flow of fuel and cause pump failure symptoms.

The wear and tear on a fuel pump can eventually affect its performance. Although it's not expected to happen until well beyond 100,000 miles, it can still cause issues.

A new fuel pump can cost as little as $100 to $1,200, depending on the make and model of the vehicle. The parts cost will also be included in the price.

Newer model car fuel pumps will typically cost more than older models. Other components may also be required to fit new connectors and hoses. And they cost between $50 to $75.

In most cases, an OEM fuel pump is the best option. However, if you're looking for a more cost-effective alternative, you can go with an independent repair shop.

How Long Does a Fuel Pump Last?

The fuel pump is an essential component of your car, designed to endure the test of time.

How To Maintain Your Fuel Pumps

One of the essential factors you should consider when it comes to keeping your fuel pump working correctly is regularly filling up your gas tank.

Running low on fuel can affect the pump's lifespan. It can also cause it to work harder to move the fuel.

Regular maintenance is also essential to ensure that the fuel system and the filters are working correctly. In addition, regular scheduling maintenance can help prevent potential issues.