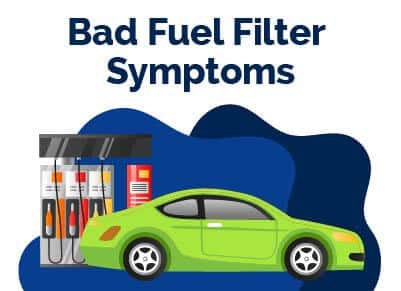 All vehicles have fuel filters designed to remove impurities from the oil before it reaches the engine.

This dirty job can make them vulnerable to debris build-up, and it's important to inspect and clean them regularly.

Like other components of your vehicle, the fuel filter can tell you when it's close to failing, so you need to be able to identify when the fuel filter has gone bad to prevent them from becoming more complex and causing mechanical issues.

Some of the common symptoms of a bad fuel filter include the fuel pump getting damaged, engine misfire, check engine light coming on, noticeable change in vehicle power, engine stalling, and others that we will discuss in this article.

What Does a Fuel Filter Do?

Before talking about bad fuel filters, it's important to understand how they work and what they do. A good understanding of the filter's functions can help you identify the signs of a potential issue.

In a combustion engine, the amount of fuel mixed with air is required to create a controlled explosion. The fuel must go through a filter to remove any particles and impurities that could affect the air-fuel ratio.

A fuel filter is a small component between the fuel tank and the injector. In older vehicles, it was usually placed in the fuel line. However, the fuel filter was placed inside the tank in newer models.

The fuel pushed out of the tank through the fuel pump passes through the fuel filter. This process allows the small particles and contaminants to get trapped inside the filter, which cleans the remaining fuel.

Over time, the fuel filter can get worn out by the particles and sediment that build up. When this happens, it's time for a fuel filter change.

Symptoms of a Bad Fuel Filter

Earlier, we discussed how the fuel filter can get worn out by the particles and sediment that build up.

When this happens, it's time for a fuel filter change. The fuel filter also shows some signs that it's close to failure.

These are the symptoms of a bad fuel filter:

The check engine light is a type of indicator used by your vehicle's internal computer to identify potential problems.

Some of these can be easily fixed, while others can be complex and lead to failure.

Although a bad fuel filter can't illuminate the check engine light, it can still trigger it depending on its effect on other engine components.

For instance, if the light indicates that the vehicle is running on weak fuel, this could be caused by the bad fuel filter.

If the check engine light comes on while the mass airflow sensor fails, it could be caused by a faulty fuel filter.

Regular maintenance of the vehicle's components can also help prevent these issues.

If the filter is completely blocked, it can cause an engine misfire. This usually occurs when the vehicle is driving on uneven surfaces or has heavy loads.

Engine misfires can be caused by various factors, including bad fuel filters. It can be hard to determine which part of the engine was affected by the misfire.

The vehicle would have to carry additional fuel to get around the Hill or carry the heavy loads.

Although a fuel filter can cause an engine to misfire, it's not always the case. Before assuming that the issue is related to the fuel filter, it's essential to identify other possible reasons for the malfunction.

3. A Noticeable Change in Vehicle Power

If the vehicle's power drops while driving on a hill, it could be caused by a faulty fuel filter.

Since the car is under stress, it will need more fuel to get the power it needs to work against gravity.

If you have a fuel filter that's not working properly, it can prevent the fuel from getting to the combustion system. This issue can cause a clear fluctuation in the vehicle's power.

A blocked fuel filter can also cause an engine to stall. If the filter is not working properly, you can still start your vehicle; however, if the car continues to run and use more fuel, it might stall because of the lack of fuel.

When you press the gas pedal, the pump will push fuel to the engine to increase its power.

However, if the filter is blocked, the fuel won't be able to get through it, which stalls the engine.

This happens because the vehicle's engine cannot get the power it needs to accelerate.

The fuel filter is essential to the operation of the vehicle's engine, as it allows fuel to flow from the tank to the combustion system.

If the filter gets blocked, it can cause stress on the fuel pump, which could cause it to get damaged completely.

6. Strong Odor From the Exhaust Pipe

If you start to smell strange, foul, or odd smells in your car, it could indicate something wrong with the vehicle's internal components. Some of these problems can be easily fixed, while others require a lot of work.

It could be caused by various factors, such as a faulty fuel filter. A blocked filter can also cause the vehicle's exhaust to emit strong fumes.

If you suspect that something is wrong with your car's internal components, it's essential to contact a professional mechanic.

This will allow you to avoid experiencing costly repairs and significant mechanical issues.

7. Difficulty in Starting the Engine

Other potential causes of engine problems include a faulty starter, a dead battery, and a faulty spark.

You can check the fuel gauge and see that the tank is full of fuel. However, if the vehicle still doesn't start, it could be caused by a completely blocked fuel filter.

The first thing you should do when the engine refuses to start is to check the fuel pump. A failing fuel pump can prevent the engine from starting.

If the other components of the vehicle are working properly and the engine still refuses to start, then the fuel filter fails.

8. Consumes More Fuel Than Before

Blockage of the fuel filter can also cause the vehicle to require additional fuel supply.

Since the engine will no longer be able to get the power it needs, it will require more fuel to generate the right amount. This could cause poor fuel economy.

A blocked fuel filter causes poor fuel economy. Although it might sound like it will improve the vehicle's fuel economy, this isn't the case.

How Long Does a Fuel Filter Last?

However, some mechanics suggest doing it at around 10,000 miles to avoid issues related to the combustion system.

The exact length of the service intervals for different vehicles depends on their make, model, and year. The owner's manual can provide the most accurate details about the fuel filter's lifespan.

If you're using a different fuel type, changing the fuel filter might be a good idea sooner than the owner's manual suggests.

The manual also assumes that the vehicle's fuel should be at a certain level of purity.

If you're not following the owner's manual's recommendations, your fuel filter might be shorter than its life expectancy.

How Much Does It Cost To Replace a Fuel Filter?

The cost of a fuel filter is relatively inexpensive, and it usually costs around $14 to $60.

However, since the labor costs are included, expect the bill to be around $100 to $150.

Even if the part is relatively inexpensive, the location where it's being done determines the final bill.

For instance, if you get your fuel filter fixed at a small repair shop, you'll likely pay less than you would at a dealership.

Some people try to save a lot of money by replacing their fuel filters. Doing so can be a bit challenging if you don't have the necessary skills to fit and replace a fuel filter properly.

If you have the necessary skills to fit and replace a fuel filter, then you're the best person to decide whether or not it's worth it to do it yourself.

Unfortunately, many people try to make their repairs by following the instructions on the Internet. Unfortunately, these methods usually don't work and will most likely cause your fuel filter to fill up.

If you have no confidence in yourself and have no previous experience with replacing a fuel filter, then it's best to contact a professional mechanic.

How To Check a Fuel Filter

On the other side of the inlet, you'll find an arrow pointing to the fuel flow direction. Clean the inlet using a shop towel.

Using a disposable cloth or a shop towel, blow into the fuel filter with a gentle movement. It should be easy to do so, though make sure that the filter is not heavily restricted or obstructed.

Gently blow into the fuel filter using a disposable cloth or a shop towel. It should be easy to do so if the filter is not heavily restricted or obstructed. If you cannot do this, the fuel filter is clogged and needs replacement.