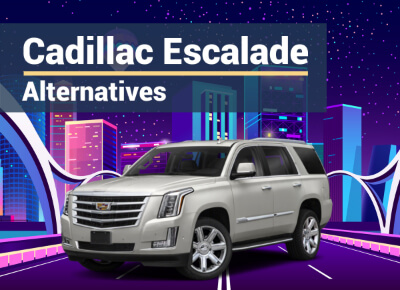 The Cadillac Escalade is about as big and brash as they come: it stretches up to nearly 19 feet long, features 38 inches worth of screens, seats up to eight, and is decked out with all the frippery one expects of a six-figure luxury SUV.

With its widespread appeal ranging from musicians to Hollywood stars to your neighbor who wants to feel like they’ve arrived, the Escalade remains unsurpassed as a symbol of wealth and success.

The Takeaway: The Escalade does a lot of things right, but not everybody wants to flaunt the image of Cadillac’s biggest, most unabashedly extravagant vehicle.

The most obvious alternative to the Escalade is Lincoln’s own juggernaut, the Navigator. The original ostentatious luxury SUV, the Navigator was quickly overshadowed by the first-generation Escalade. Since then, the Cadillac has been the go-to pick for buyers interested in this category - but the latest Navigator has changed that thanks to more modern engineering and stunning interiors.

Let’s start with the engineering bits. Under the hood lies a twin-turbo V-6 making 450 horsepower and 510 lb-ft of torque. Already that’s more grunt than the Escalade’s 420 horsepower and 460 lb-ft of torque. The Lincoln’s extra power means it can tow more than the Cadillac as well. Around town, the smaller turbo engine gets better fuel economy than the 6.2-liter V-8 used in the Escalade.

The Navigator’s cabin is a benchmark for opulence, at least in the top-shelf Black Label trim. The Black Label costs right around $100,000, but for that money, buyers get one of three color-coordinated interior designs that revolve around a certain lifestyle theme. Regardless of the chosen theme, all Black Labels enjoy exquisite materials, trimmings, and build quality.

The Black Label buying experience also includes white-glove treatment that provides a personal concierge, a mobile showroom, remote delivery, and pickup and ferrying services when maintenance is necessary. It’s a final flourish of extravagance on a vehicle that is every bit the Escalade’s equal.

The Takeway: If the Escalade isn’t quite opulent enough, a Lincoln Navigator Black Label is sure to satisfy. It’s additional power and sumptuous interior make it an excellent alternative to the big Cadillac. 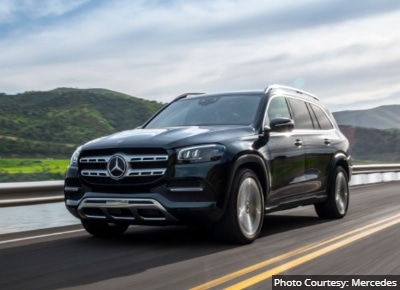 Another alternative to the big Cadillac is the big Mercedes, the GLS. While it might not be the most expensive or outrageous Mercedes SUV - that honor falls to the G-Class - the GLS is certainly the biggest, though it can't come close to the dimensions of the Escalade. If you're looking for maximum interior space, the Escalade remains the king among full-size luxury SUVs.

Nonetheless, the GLS is a formidable SUV. Its powertrain options run the gamut from a turbocharged inline-six making 362 horsepower, a twin-turbo V-8 with 483 horsepower, and even an AMG model with over 600 horsepower. You'll get to 60 mph from a standstill in just about four seconds - a heck of a lot quicker than the fastest Escalade, if you were wondering. We didn't think something of this size could move so deftly, but the GLS AMG63 proves us wrong.

More interested in luxury than speed? The GLS also is offered in Maybach trimmings. This is Mercedes pulling out all the stops in an effort to make the GLS as close to a cargo-eating S-Class as possible. Some of the amenities include Nappa leather, air suspension, and two rows of seats with seating for four. The back seats get all manner of power adjustment as well as heating and cooling functionality.

You'll pay for all this luxury, though. Base GLS models start right around $77,000; getting into the V-8 costs just a hair under $100,000, which is nearly $20,000 more than a base Escalade with its standard V-8. And while Escalades with all the options don't stretch much past the six-figure mark, a GLS can set you back as much as $161,000 if you opt for the Maybach model. If you're buying by the pound, the Escalade is the downright better deal.

The Takeaway: Luxury doesn't get much better than this. Refined, fast, and with a nearly bottomless well of options and trims, the GLS family rivals the Escalade lineup when it comes to blending pomp and size into one attractive package.

You may qualify for additional deals and incentives, check out this month's Mercedes-Benz deals and average prices paid. 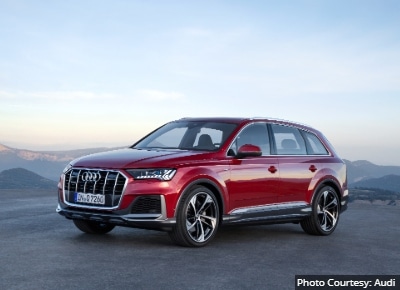 One of Escalade's most appealing qualities is its abundance of technology, but it by no means is alone in that distinction. Another excellent three-row luxury SUV that oozes tech is the Audi Q7. Though the Q8 recently surpassed it as Audi's flagship SUV, that doesn't mean the Q7 is no longer relevant. On the contrary, it delivers an excellent array of features, comfort, and capability.

Inside, the Q7 is all business - quietly demur, extremely well built, beautifully integrated. There is a sense of seamlessness in the tech and the switchgear. The digital MMI dashboard is rendered with the quality of 4K, though Cadillac is upping the bar with a curved OLED digital dash that might be the new standard to beat. Audi's infotainment interface remains a favorite thanks to its intuitive menu layering and command system. And its active-safety tech is effective without being intrusive - a feat for any vehicle.

Powertrains are a mixed bag. Our favorite is the 335-horsepower turbocharged 3.0-liter V-6, which is an excellent balance of power and economy. The base 2.0-liter turbo-four is likely more efficient, but it doesn't have the power reserves so integral to the luxury experience. Talking about power reserves, the SQ8 and its 500 horsepower is a mean machine that's faster than any Escalade.

Probably the most impressive part about the Q7 is its value, at least among this crowd. A base model with the 2.0-liter engine starts under $60,000; you can get a nicely equipped V-6 model for around $70,000 or a bit more, depending on how crazy you go with the options. And even the SQ8 rings in well under $100,000. Against any of the SUVs discussed thus far, this is far and away the most affordable and yet gives up nothing but a bit of cargo room against any of its rivals.

The Takeaway: Soft-spoken luxury meets seamlessly integrated technology in the extremely competent Q7. It's no Escalade in terms of image or features, but it will happily shuttle three rows of passengers in delightfully quiet and comfortable accommodations. 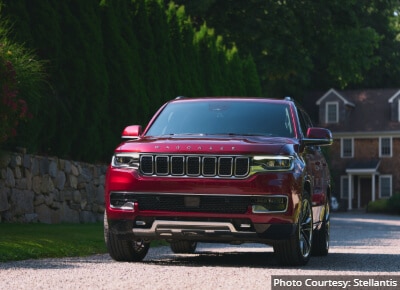 The older readers out there might remember when Jeep played in the 1980s luxury SUV space with plastic wood-sided Grand Wagoneer. That model - then a relic that dated back to the 1960s - has gone on to be an icon of 1980s Detroit. For 2022, Jeep is capitalizing on the infatuation with the original by trotting out an all-new, three-row SUV carrying the name. It’s sized and priced like the Escalade.

Spending Cadillac money on a Jeep seems like a dubious proposition, but bear with us here. For starters, you won’t find anything less than a 471-horsepower 6.4-liter V-8 under the hood. Unlike the Grand Cherokee, which uses a unibody design, the Grand Wagoneer uses old-school body-on-frame underpinnings. That stout construction pairs with the big engine to enable up to nearly 10,000 pounds of towing capacity - the highest of any SUV on this list, and better than the Escalade by about 1,500 pounds.

Inside, the Grand Wagoneer guns for the Escalade by providing a plethora of screens and acres of leather and wood. Up front, buyers enjoy two standard touchscreens - one for the infotainment, one for climate control - while a third screen mounted in the dash space ahead of the front passenger is included on most trims. Add in the standard digital gauge cluster and the Grand Wagoneer begins to rival the Escalade for screen real estate.

As we mentioned, the Grand Wagoneer costs about as much as an Escalade, if not more. For the money, you’re getting a tech-forward SUV with Jeep capability and surprising levels of elegance. The thought of a six-figure Jeep will take some getting used to, but the ritzy Grand Wagoneer puts its money where its mouth is.

The Takeaway: The Grand Wagoneer is a debonair all-rounder, offering real off-road talent along with a major dose of luxury. It’s no stretch to cross-shop an Escalade - and we highly recommend doing so.

You may qualify for deals and incentives, check out this month's Jeep deals. 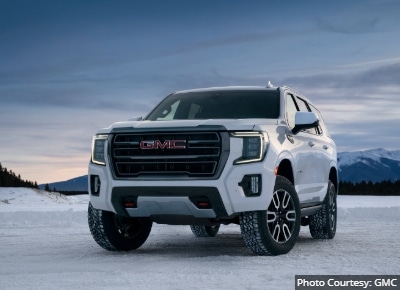 This is the most obvious alternative to the Escalade. Why, you ask? Because the GMC Yukon and Cadillac Escalade are kissing cousins. We discussed this earlier, but let’s recap: engines, platform, and even many features are shared across both models. They offer similar performance and cargo space, and the Yukon goes so far as to offer the adaptive air suspension that comes standard in the Caddy. Objectively, the two SUVs are one and the same.

The Yukon also offers two distinct flavors of its flagship SUV. The Denali remains the most coveted, a chrome-heavy, big-wheel paean to traditional luxury. The AT4 has a more off-road oriented personality thanks to all-terrain tires and some stylistic tweaks. If that’s more your jam, you’ll find there’s no equivalent in the Escalade lineup. The Cadillac clearly prefers the blacktop to the trail.

The cabin of the Yukon doesn’t have the wow factor of the Escalade, but it does a fine job communicating luxury. There’s leather, wood, and technology all in generous amounts. Some flagship features like a 15-inch head-up display are found in both the Escalade and Yukon. Others - like the OLED digital dash - remain the exclusive purview of the Escalade, but otherwise, you can get the most important or useful features in both SUVs.

The Takeaway: The Escalade might have the pizzazz, but the Yukon brings the substance. For thousands less, you can get what amounts to essentially the same SUV with a slightly more downmarket interior. Left-brain types will for sure want to check out a Yukon before they shop the Cadillac.

You may qualify for additional deals and incentives, check out this month's GMC deals and average prices paid.

What models compete with the Cadillac Escalade?

The closest competitors are the Jeep Grand Wagoneer, Lincoln Navigator, and the GMC Yukon. Other alternatives include the Mercedes GLS, Audi Q7, BMW X7, Range Rover, and Lexus LX570.

What's the most reliable alternative to the Cadillac Escalade?

The Lexus LX570, which is famous for its longevity and durability.

Which SUVs tow more than the Cadillac Escalade?

The best among this crowd of SUVs is the Jeep Grand Wagoneer, which manages just shy of 10,000 pounds of towing capacity. The Navigator also trumps the Escalade with its 9,100-pound tow rating.

Which has more cargo space, the Cadillac Escalade or Lincoln Navigator?

The Escalade tows more, both in long- and standard-wheelbase form. The regular Escalade will hold up to 110 cubic feet; the ESV, up to 127 cubes. The Lincoln holds 103 or 120 depending on wheelbase.