Can You Pump Gas with the Car On? 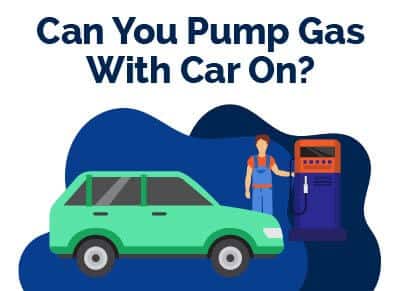 Like most people, you probably ignore these signs even though the warning states otherwise. If you have defied this order and started pumping gas with the engine on, it's possible that nothing happened.

However, does this mean it's okay to continue filling up without shutting off your machine?

The answer to this and many more will be revealed in the article. In addition, the article will discuss whether or not it’s legal to pump gas with the car on.

Can You Pump Gas with the Car On?

While you can technically pump gas with your car on, it is not safe.

The engine's running creates the ideal conditions for igniting vapors, which could lead to a fire. Whether spark or static electricity, fuel can quickly turn into a fire.

Even though it's rare for this to happen, it's still important to take the time to switch off your car while you pump.

The signs at the pump clearly state that you must turn off your vehicle. Failure to do so could result in you being held liable if something goes wrong.

Your car's fuel vapor system is designed to prevent this from happening.

However, if you let your car run while pumping gas, it could also result in a check engine light on your dashboard with a P0455 trouble code.

Is It Legal To Pump Gas with the Car On?

In the U.S., it is illegal to leave your vehicle running while refueling. According to the International Fire Code, most states follow this ruling.

The Code also states that it is prohibited to light up and ignite open flames or smoke in areas where fuel is being dispensed.

In addition, the engines of the vehicles must be turned off when refueling.

If you're still filling up, you should know that local law enforcement officials could fine you.

In addition, failure to turn off your vehicle while at the pump could result in you being cited.

Leaving your vehicle running while you're filling up is illegal in California. This rule states that you can't refill your fuel tank with flammable liquid while the engine is running.

They do this because the car's interior gets extremely hot. They also turn on their air conditioning to keep the car cool.

Why It's Dangerous To Pump Gas with the Engine On

While it's technically possible to safely fill up a running car, it's still dangerous. The issue is not the car itself, but the conditions created when you put gas in it.

The vapors could then come in contact with either electricity or heat, which could cause ignition.

A gas pump's automatic stop feature is designed to prevent this issue. However, if the stop mechanism fails, the tank could overflow and spill the gas onto the ground.

Even though it's rare for this to happen, it's essential to take the time to shut off your vehicle while you're filling up. Doing so could prevent the issue from happening.

Static electricity is another issue that can occur at gas pumps. If you're not careful, it could cause a flash fire. You should always touch something before you start to fill up with gas.

When static electricity accumulates after you've returned to your car, it could cause a flash fire if you remove the nozzle from your vehicle.

Spark plug leads and plugs are essential in a car's ignition system. They ignite the air and petrol mixture in the engine.

The excellent insulation around these plugs ensures that they stay cool and prevent them from generating excessive amounts of electricity.

Unfortunately, if the insulation around these plugs gets broken, it could ignite the car, but this is not likely to happen as my car would be hard to start with a faulty spark plug.

Nonetheless, if you notice any issues with your spark plugs, you should replace them immediately.

The catalytic converter is a component of a car that helps clean the vehicle's exhaust.

Since it's located in the middle of the engine, it can get extremely hot fast. New models can handle temperatures up to 900 degrees Celsius.

Since the catalytic converter can get extremely hot, it can potentially ignite the car.

However, since high-quality catalytic converters can cool down quickly, this issue is usually minimal.

While it's essential to turn off your engine while you're at the pump, there are other ways to ensure that you're still safe while you're filling up.

Never smoke or vape while you're filling up, as this could cause the vapors to ignite and cause the tank to catch on fire.

Using your mobile device while filling up can also create static electricity. This is why it's important to leave it inside the car.

Before you start filling up, turn off all your devices, including your mobile device, to prevent them from creating static electricity.

Never leave your pets or children unattended while you're filling up. Doing so could allow them to spray gas all around the pump accidentally.

Although it's rare for a flash fire to occur at a gas station or service station, an average of 4,150 fires have reportedly happened in these establishments every year from 2014 to 2018.

Electrical and mechanical issues caused the majority of these fires.

Putting out any cigarette or vape before filling up with gas is common sense. Since you already stated that you don't want to ignite any spark while filling up the tank, you should refrain from smoking while filling up.

Even small amounts of smoke can cause the fuel to ignite spontaneously.

You're also required to use an approved container when you're filling up a gas can. This container should be used for the type of fuel that you're putting in it.

Gas cans are color-coded and can be used for different fuel types.

According to the Occupational Safety and Health Administration, having the correct type of container helps make it easier to identify which one to use when filling up.

Never use plastic bags or barrels to fill up your fuel. Doing so could be very dangerous. Also, make sure to use an approved container for the type of fuel you'll be putting in it.

Stay there to ensure you can still fill up at the pump. Setting the lock mechanism on the pump to open the spigot is generally more straightforward, but you should never walk away from the situation.

It's essential to stay at the pump to ensure you fill up your tank. The lock mechanism on the pump is generally easier to set, but you should never walk away from it while pumping.

This is because it allows you to hold the nozzle open while pumping.

Having your children and pets with you is expected when you run errands and fill up.

Although understandably, these individuals would like to visit the station with you, they should always stay inside the car.

You should also avoid allowing your kids and pets to hang out near the pumps.

Doing so could allow them to accidentally knock the nozzle out of its position, which could cause the tank to fill up.

If this happens, the station's operator might hit the panic button and shut off the service.

If your kids are tired of the car, you should wait until you're ready to leave the station. Then, you can park somewhere else to get a drink or take a bathroom break.

What Is a Fuel's Flashpoint?

Understanding the flashpoint of fuel is very important to avoid getting into a gas station accident. Both gasoline and diesel are flammable liquids.

Since they're both flammable, running a car in a gas station can be very dangerous.

As a vapor, gasoline has a flashpoint of -43 degrees Celsius. This means that even a tiny spark can ignite the fuel droplets in the air. This is why internal combustion engines perform well when using gasoline.

Fortunately, this occurrence rarely happens. Usually, the atmospheric conditions need between 2% and 8% to provide the necessary fuel for combustion.