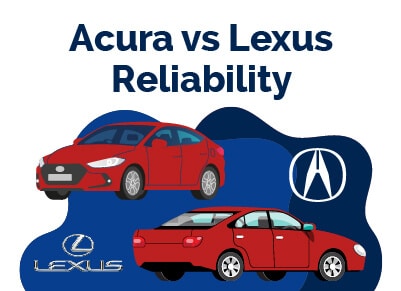 Acura and Lexus are very reliable car brands. Both car brands have a record of producing problem-free cars that can last up to 150,000 miles without major repairs. The cost of maintenance on Lexus and Acura is relatively cheaper.

You get the engineering prowess of Toyota on Lexus cars and Honda on Acura. However, no matter how popular and strong these cars are, which is better? The truth is, Lexus is more reliable than Acura.

The Lexus brand emphasizes comfort and luxury, ensuring you enjoy a wholesome driving experience. It is also important to cite that Lexus holds more value than Acura. This is if you wish to sell after two to three years.

In this Acura vs Lexus reliability ratings analysis, we will be comparing these two auto brands to see which of them is better.

Acura Vs. Lexus Reliability: Which is Better?

It is a hard task comparing Acura and Lexus. The comparison looks like comparing coke and Pepsi, which one is better. Both car brands have their individual strengths and weaknesses.

Lexus offers the benefits of elegance, but Acura is a tempting choice when you want a performance car. It is important that we analyze the features of both cars and help you decide which is the best choice for your budget.

When it comes to reliability, the answer is simple. Lexus is better. This might not be what you were expecting to hear. Acura is better than Lexus in performance, with great benefits in handling and driving dynamics and a cheaper maintenance cost.

But you must understand that Lexus does it better when it comes to safety, fuel economy, and comfort. This includes their ability to retain more value than Acura cars.

This means that you will have more problems to deal with in an Acura car than you will with a Lexus.

Acura and Lexus have almost the same standards when it comes to reliability. Although Acura is designed to look sporty, with Lexus aiming for class and luxury, the interior designs of both cars are almost on the same level. The differences in the design of Acura and Lexus cars narrow down to the model you choose.

There is an integration of technology in both cars, superb infotainment, and a rollout of attractive cars. Acura features a maintenance system that reminds users when their cars need attention and what to do about it. The truth is, while Lexus aims at pushing boundaries, Acura has a design philosophy that revolves around details, form, and function.

It is relatively cheaper to repair and maintain an Acura than a Lexus. The cost of repairing and maintaining cars from these two models is cheaper than what is obtainable from others. You can drive an Acura and Lexus for up to 150,000 miles, and the only maintenance procedure you will have to care for is an oil change.

However, it is cheaper to repair/maintain an Acura than a Lexus. The average annual repair and maintenance cost of Acura is $501, whereas Lexus is $551. Both car brands are cheaper than the average $652 for all car models.

The Lexus brand rides on the durability of Toyota. Toyota is known for high-quality engines that last long, but Acura is not bad either. Acura utilizes high-strength steel that goes up from 54% to 60.9%.

Both car models are built to achieve dynamism, durability, and optimum protection against collision. The design, structure, and finishing of Lexus and Acura cars make them last longer.

The true test of reliability lies in how well your engine can perform and the amount of strength it can deliver. The reliability of Lexus and Acura engines varies according to the models that they offer.

Performance and speed are the watchwords of Lexus and Acura, although the approach and delivery are different. Acura optimizes approach, reinvention, innovation, and testing. The powertrain, drivetrain, and chassis of Acura cars are rigorously tested to ensure that they deliver power and precise handling. This gives their cars varying strength to handle snow rides, sandy terrain, and the harshest conditions.

Lexus engines are quiet, and you will spend less to keep them on the road. The future of Lexus engines revolves around controlled performance with superb durability. Whether you are going for Lexus’ V8 engines, Acura’s turbo engines, or the 3.5L DOHC engine, you are assured of the best performance.

Lexus and Acura are big on gas mileage, but Lexus does it better. Both car brands use fuel-saving technology to achieve the most from each drop of fuel. Acura features an integrated dynamic system, while Lexus features an Eco mode technology.

You must understand that the gas mileage comparison of Lexus and Acura cars lies in their different models. So far, Lexus has better cars that return more gas mileage than Acura.

The truth is, whether you are choosing an Acura or a Lexus car, you are getting a good dose of reliability, safety, and efficiency. Acura and Lexus offer a great level of durability, cheap maintenance costs, and awesome designs. However, you have to consider what you will get from both cars.

You should go for Acura if you want cheaper maintenance costs, but Lexus if you want better gas mileage and higher safety ratings. Lexus holds more value than Acura, but both cars have great engine performance.

Do Acuras last as long as Lexus?

Can Acura use regular gas?

Yes. Acura can use regular gas. In the event that premium gas isn't available, you can substitute it with regular gas. However, it is advisable to use premium 91-octane gas for your Acura car to prevent engine knocking(pre-ignition), which can damage your pistons and cylinder walls over time.