Competing with the Toyota RAV4 can prove challenging, given the depth of its lineup.

So, where do rivals such as the Honda CR-V, Kia Sportage, Mazda CX-5, and Ford Escape aim their efforts to disrupt the dominance of this class leader that has been an American best-seller for the past four years?

Is it performance and utility, comfort and safety, or perhaps an abundance of technology that will give them an edge? Let’s find out.

The Takeaway: Clearly, a plethora of choices is the RAV4’s ace card, but its rivals are not laggards when it comes to performance, functionality, and price. Nevertheless, in the compact, 5-passenger crossover/SUV marketplace the RAV4 has dominated in great measure because of Toyota’s reputation for quality and reliability. 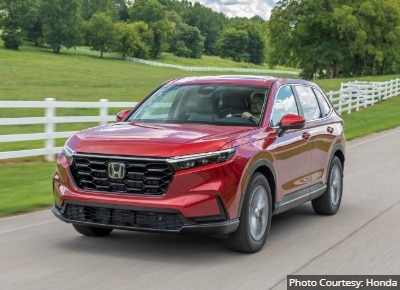 Of all the vehicles in this comparison group, the Honda CR-V boasts a sales volume that most closely rivals the RAV4. Granted, it doesn’t provide the range of choices one finds in the RAV4, but it certainly presents a competitive combination of reliability, style, and utility to most of the Toyota’s offerings.

Generally, the CR-V is on par with the RAV4 trims where towing capacity maxes out at 1500 pounds. However, if the ability to tow a small camper or boat is a must-have requirement, then the CR-V doesn’t offer any challenge to the towing ability of either the RAV4 Adventure or TRD Off-Road. On the other hand, if you need a few cubic feet more cargo carrying space with the rear seats folded, then the CR-V gasoline powered trims have the overall advantage.

High-tech safety features are comparable to the RAV4, but convenient telematics such as Apple Carplay and Android Auto become available above the entry-level LX trim. Also, the LX gets a small 5-inch display while upper trims get a 7-inch touchscreen. The RAV4 starts with a 7-inch screen and moves up to a 9-inch one in the upper trims.

The Takeaway: The CR-V goes head-to-head with most RAV4 offerings, and it makes a comfortable, well-purposed family vehicle that’s earned high marks for safety. But, if one intends to take the less-travelled road to the wilderness, the RAV4 Adventure and TRD Off-Road editions are better choices. 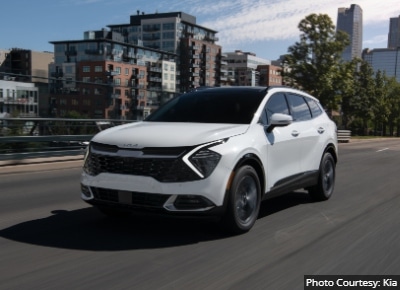 Kia has introduced a redesigned Sportage for 2023 featuring seven conventionally powered trims plus three hybrid and two PHEV editions. The starting sticker price of the base LX is $25,990, making the Sportage the low-price leader in our group of five competitors.

Don’t let the price deceive you into thinking any inferior thoughts about this crossover/SUV. It comes remarkably well equipped, handles precisely and scores high for its visual appeal. Plus, it closely rivals the RAV4 in its range of choices and sits at the head of the class among this group in cargo space behind the rear seat. In addition, the entry-level 8-inch infotainment display is quickly superseded by an impressive 12.3-inch touchscreen with navigation in all upper trims.

All-wheel drive equipped versions of the Sportage, which are found across the lineup, boast 8.3 inches of ground clearance. Higher-end trims are offered as AWD only. Towing capacity when properly equipped maxes out at a respectable 2,500 pounds in the gasoline-only trims – not enough to top the best of the RAV4s in this category but better than the 1500-lb. norm.

As for fuel economy, the FWD Sportage hybrids offer the best fuel economy among the non-plug-in hybrids and will save anywhere from $650 to $1000 annually in fuel costs over the conventionally powered models. Drivers who prefer an automatic transmission with specific gear ratios over a continuously variable transmission (CVT) will appreciate that the Sportage hybrids and PHEVs employ a 6-speed automatic. Incidentally, because of its efficiency, the PHEV uses a small 11.1-gallon gas tank yet achieves a driving range of 430 miles that includes 34 all-electric miles.

The Takeaway: In many ways, the redesigned 2023 Kia Sportage puts forth the most comprehensive challenge to RAV4 dominance. In price, choices, and technology, the Sportage is defining its own leadership position. It will likely be a battle that plays out in real time over several years, but it’s clear that Kia has thrown down the gauntlet. 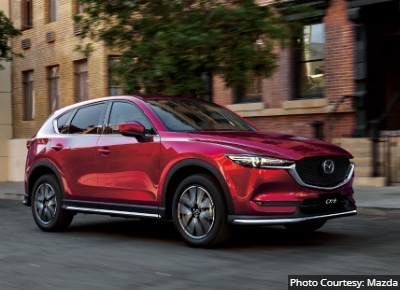 The Mazda CX-5 seems a bit out of its league being pitted against the other four models in this comparison. It falls short in cargo capacity, and it trails in fuel efficiency as well. But that alone doesn’t define this perky 5-passenger crossover that slots perfectly into the price range and purpose of these five small utility vehicles.

One could say it’s all in the drive for the CX-5. What it lacks in horsepower compared with the RAV4, it more than makes up for in quickness boasting an impressive 310 lb-ft of torque at a low 2000 rpm in the turbocharged editions (320 lb-ft if one uses 93 octane fuel). The base engine is quite competent as well, matching the entry level Sportage in horsepower but overtaking it off the line with 186 lb-ft of torque versus the Kia’s 178 lb-ft. Add in the standard all-wheel drive, manual shift mode, and spot-on steering, and the CX-5 proves to be a very fun crossover to drive.

Inside, passengers fare well with legroom at a competitive 41 inches up front and 39.6 inches in the second row. Headroom as well is a comfortable 39.1 inches in models without a moonroof, though very tall drivers may want to compare this closely with the Honda CR-V and Ford Escape.

Even so, the CX-5 takes the lead with standard onboard technologies such as dynamic cruise control with stop and go, wireless Apple CarPlay integration and blind spot monitoring with rear cross traffic alert.

The Takeaway: Depending on one’s point of view, the Mazda CX-5 is either an indulgence or a sacrifice. Its on-road delights and well-equipped interior can be quite satisfying, but if the price of fuel weighs heavily on the household budget, there are much more efficient choices.

You may qualify for deals and incentives, check out this month's Mazda deals and average prices paid. 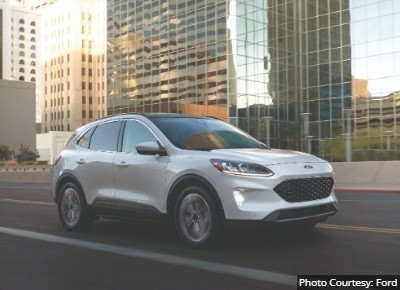 The Ford Escape offers four distinct grade levels, S, SE, SEL and Titanium, all available with gasoline-fueled powertrains. All except the S also are offered in hybrid and PHEV configurations. PHEV versions of the Escape top our list in fuel economy, managing a very budget-friendly 105 mpge in combined city/highway driving when using the 37 miles of all-electric capability. Hybrid versions (including the PHEV in gasoline mode) earn either 40 or 41 mpg ratings which puts the Escape right up there with the leaders.

Interestingly, based on the numbers, one might think the Escape would be right alongside the RAV4 and the CR-V in sales but strangely that is not the case. Nevertheless, it is a compact crossover/SUV that merits serious consideration, not only based on performance and features, but reliability, safety and value as well.

True, the entry-level S is a bit shy on features, but one doesn’t need to go far up the trim to satisfy the need for niceties such as voice-activated navigation, adaptive cruise control, heated front seats and dual-zone climate control. What’s more is that it won’t cost a barrel of greenbacks, either. Pricing for a well-equipped SEL Hybrid starts at $32,550. Adding the optional moonroof puts it in the same price range as the comparably equipped RAV4 XLE Premium Hybrid, which comes with the moonroof.

For the giants among us, the Escape provides 42.4 inches of front legroom – the most in any of the five rivals in this group; – and its 40 inches of headroom is only topped by 1/10th of an inch in the lower trim level Honda CR-Vs.

The Takeaway: The Ford Escape presents a strong challenge to the RAV4 in three specific area – performance choices, fuel economy and value. In addition, it fulfills a prime directive to which the most successful compact crossover/SUVs adhere – offer utility vehicle flexibility while providing car-like comfort and handling.

You may qualify for deals and incentives, check out this month's Ford deals and average prices paid.

What vehicle is the best alternative to the Toyota RAV4?

Our comparisons give you a starting point for researching what vehicle will best meet your expectations. These are just five of at least a dozen models to examine. Others to consider include the Chevrolet Equinox, Hyundai Tucson, Nissan Rogue, Subaru Forester, Volkswagen Tiguan, and others.

What’s the difference between a Hybrid Electric Vehicle and a PHEV?

There are several ways in which a hybrid electric vehicle (HEV) can boost efficiency in a gasoline powered vehicle. HEVs generally employ a small battery pack to provide electricity to an electric motor that assists the gasoline engine in delivering performance. That electric motor also functions as a generator to recapture energy and store it in the battery.

PHEV is an acronym for a plug-in hybrid electric vehicle. These vehicles have larger battery packs that can store enough energy to operate the vehicle on electric power alone for distances that are typically between 20 to 45 miles. They can be plugged into household current to recharge. For driving longer distances, the gasoline engine is the main source of power.

Can I tow a small boat on a trailer with a compact crossover?

Check the tow rating for the specific model and trim of the vehicle, and compare it with the combined weight of your boat and trailer. Tow ratings are based of the structural dynamics of the vehicle. Do not exceed the rating. Doing so increases the likelihood of causing damage to the vehicle’s suspension system, plus there is a risk of losing control of the vehicle.