Which Is the Most Reliable Midsize Truck? [Top Rated Models] 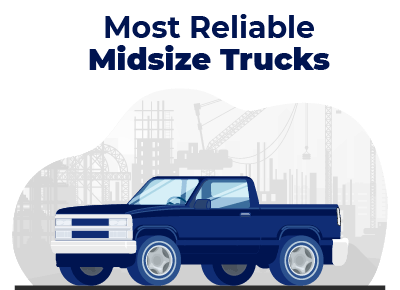 Shoppers looking for a midsize truck have a unique set of priorities. Among those is reliability, which is a major factor in how we determine our list of the best trucks.

We researched the midsize truck models available in the American market using three trusted sources, and we also aggregate those scores to a simple to understand A-B-C-D type rating of our own.

Here is what our research revealed.

Check out our top picks for the most reliable trucks >>

J.D. Power, by contrast, provides a score based on the number of problems the brand had over three years with its vehicles. Specifically, the J.D. Power Vehicle Dependability Study is what we use. It is a three-year average for all models from the brand. We feel that a brand’s quality reputation matters as much as an individual model’s. With the J.D. Power scores, lower is better.

The last source we look at for information is CarComplaints. This source is a great reality check. The site pulls together a good list of complaints by owners to see if any scary trends have emerged. This is a way to avoid big problems. Even if the manufacturer is covering the repairs under warranty, nobody wants a truck they can’t count on. 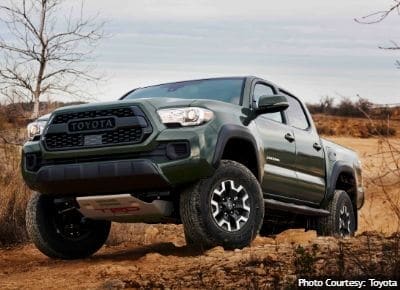 The Toyota Tacoma often finds itself atop any list of vehicles with solid resale value. The Tacoma is also the longest-running model in this segment, and the top-seller by a wide margin. When Chevrolet, GMC, and Ford quit the midsized segment, Toyota continued to polish this gem.

However, there may be trouble in paradise. Owner complaints have reduced the Tacoma’s Consumer Reports rating. Also, though not part of this analysis, we noticed that the owner satisfaction score of the Tacoma is nothing to brag about anymore.

The Toyota brand still has a legacy of quality, reliability, and durability that is shown in Toyota’s great J.D. Power score. There is no midsized truck brand even close to Toyota on that ranking. Nor are there any scary, common issues with the Tacoma to be found at CarComplaints. 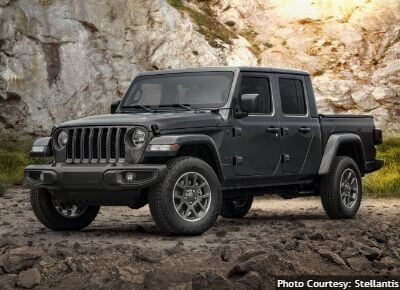 Watch out Toyota, the Jeep Gladiator is closing fast. The Gladiator has a 5 rating from Consumer Reports for its model years, 2020 and 2021.

However, the Jeep brand is still working its way up the J.D. Power rankings for brand reliability. The Gladiator is the most off-road capable midsized truck in a field of many excellent mudders and rock-hoppers.

This is the model to watch going forward. 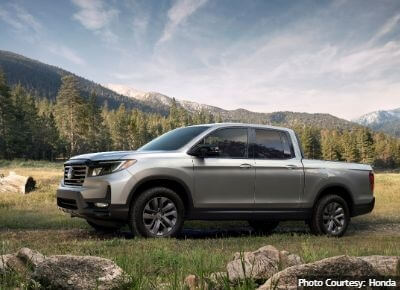 Ask any reviewer which midsized truck is their personal favorite, and the Ridgeline is likely the answer.

The Ridgeline drives like a Honda SUV, which is a high compliment. It has the most comfortable ride by a country mile, and has handy gadgets and features galore. The Ridgeline out-scores the Tacoma in Consumer Reports’ ranking.

There are no scary common problems found at CarComplaints. However, the Ridgeline is let down by a J.D. Power brand score well below the industry average. 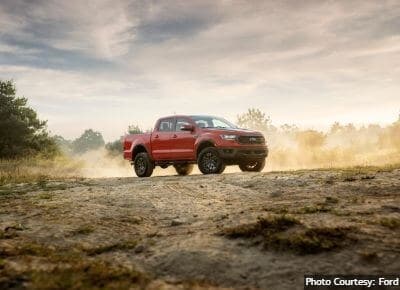 Ford’s all-new Ranger returned to the market in 2019. Owners found a lot of problems in that first model year, which is why the Ranger’s Consumer Reports score is lower than one might expect.

We predict the Ranger’s quality to continue to improve.

For now, it falls mid-pack in our rankings. 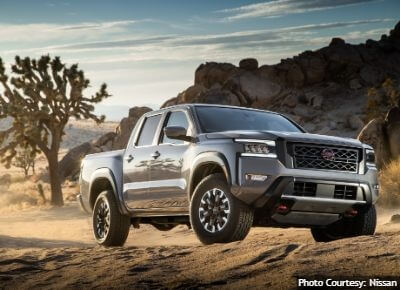 The Nissan Frontier was one of the oldest truck designs on the market until its all-new generation was announced recently as a model year 2022 truck.

Consumer Reports predicts a ⅗ rating for the Frontier, but its data was limited for prior years. All new-generation vehicles have higher than typical issues, so we suspect the Frontier may as well.

From that point forward, we would expect the truck to fall mid-pack. 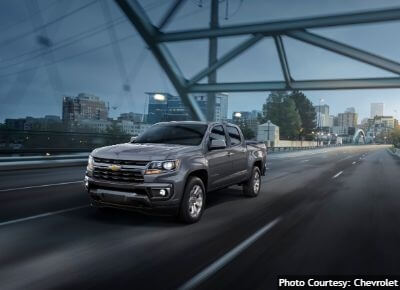 The Chevy Colorado returned to the American market in 2015.

That year earns CarComplaints’ “Beware of the Clunker” warning due to transmission issues.

However, the Truck has had a much better reliability rating since. Good enough to fall in the middle of our rankings. 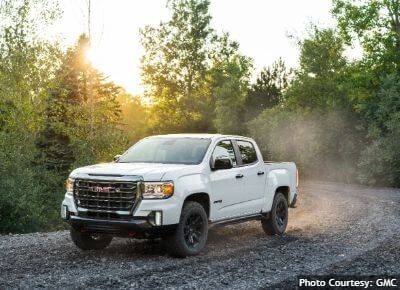 Although the Canyon and Colorado are twins, the GMC line has a lower overall J.D. Power brand reliability rating. So low, that it pushed the Canyon to the bottom of our list.

That does not mean it is a bad truck. On the contrary, we find it a very good truck in most ways.

However, we followed the data, and this is where it placed the “Professional grade” Canyon.

You may qualify for deals and incentives, check out this month's GMC deals here.

Which Midsize Truck Is the Most Reliable?

Unlike some truck segments, the midsize pickup segment has a clear winner when it comes to reliability. The Toyota Tacoma earns higher scores across the board, and not by a little. Toyota is a brand built on quality, and its Tacoma is a long-polished gem.

Jeep’s Gladiator was a surprise second. In only its second production year, the Gladiator is already ahead of the rest of the pack. We feel its scores will improve in upcoming model years and it may rival the Tacoma. 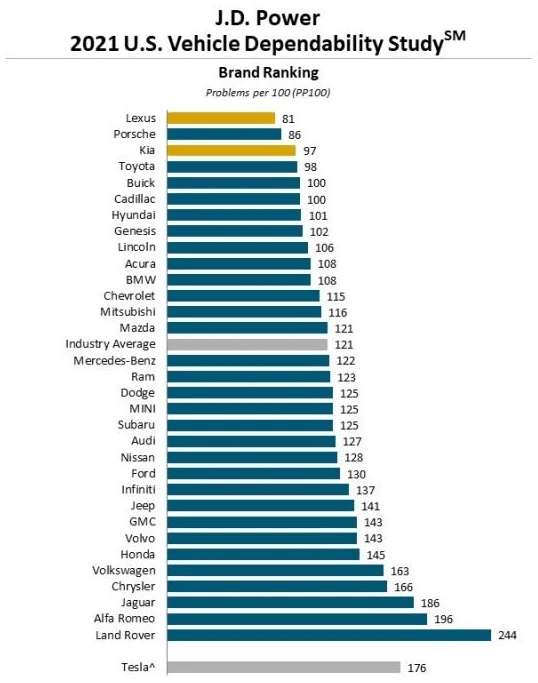 Most Reliable Trucks By Size

See all picks for the most reliable trucks » 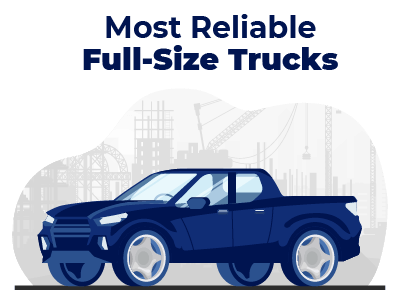 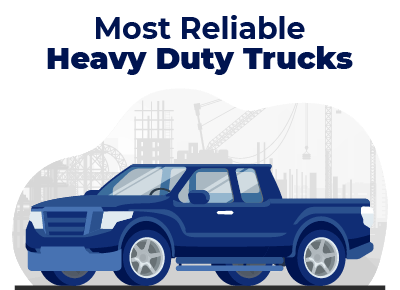 What is the most reliable midsize pickup truck?

The Toyota Tacoma is the most reliable truck based on our review of three reliable sources of data. The Tacoma has a long history of reliability and durability. This is reflected in Tacoma’s great resale value.

Which truck brand is most reliable?

Toyota makes the most reliable trucks based on Consumer Reports, JD Power, and CarComplaints.com data. Both the Tacoma and Tundra lead their segments for reliability.

What is the most unreliable midsized truck?

We hesitate to call any truck in the midsize segment “unreliable.” All of the trucks score a C- or better overall in our rankings. However, the GMC Canyon is the truck the data points to as being the least-best for reliability.

Our opinion is that for many buyers, the Honda Ridgeline is the best truck overall in the midsized segment. However, those who want the best off-road capability should look first at the Jeep Gladiator. If sales are any indication, the Toyota Tacoma is the best midsize truck.