Toyota Tacoma vs Ford Ranger: Which Is the Better Midsize Truck? 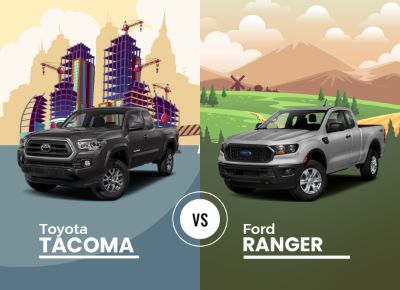 In some ways, this could be a David vs. Goliath matchup: the Toyota Tacoma - a long-standing favorite among midsize trucks and a perennial best-seller - versus the Ford Ranger, which in its current form was brought from overseas markets to do battle with the Japanese heavyweight.

Yet Ford is no scrappy underdog. It knows a thing or two about trucks, and the Ranger is quick to prove it. Maybe Goliath vs. Goliath is a better metaphor for this duel.

We wanted to see for ourselves how these two trucks compared, so we’ve taken a look at some of the most relevant facts and figures to come to a conclusion. 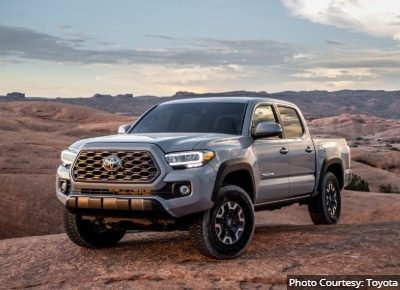 Both trucks are offered with similar layouts. The Tacoma can be had with either an extended cab or crew cab; the former uses a six-foot bed, while the latter is offered with either a five- or six-foot bed. The longest models - those that pair the six-foot bed with the crew cab - clock in at 225 inches long on a 140-inch wheelbase. Yes, we’re still talking about midsize trucks, by the way.

The Ranger isn’t much smaller. It features the same choice of cab designs and bed lengths, but the longer bed is limited to the extended cab; you can’t get a crew cab with a six-foot bed. That leaves the longest Ranger measuring in at 211 inches long on a 127-inch wheelbase. This is still big - flagship luxury sedans are shorter - but it doesn’t stretch as long as the nearly full-size Tacoma.

With the beds measuring the same length, there’s not much there to split hairs with. Width, however, does differ between the two trucks: The Ford’s bed is 61.4 inches between the fenders, while the Toyota’s is 56 inches wide. That gives the Ford an edge on the total bed area.

The Takeaway: The Toyota Tacoma offers more flexibility in pairing beds and cabs, but it might stretch a little too long for your garage in certain configurations. The shorter Ford boasts the wider bed regardless of bed length. 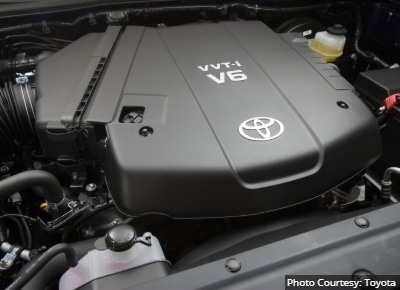 Both trucks come out of the gate with four-cylinder power, but only the Toyota offers something with more sizzle. That said, the Ford gets away with one powertrain because the base engine has the power and capability of the Toyota’s optional setup.

So what’s the magic Ford engine that eliminates the need for something more powerful? A 2.3-liter turbocharged inline-four making 270 and 310 lb-ft of torque. That’s a fairly strong showing for a four-cylinder engine, and those figures enable a maximum 7,500-pound tow rating and 1,860-pound payload capacity.

The Tacoma’s base four isn’t nearly so powerful. The big 2.7-liter four generates just 159 horsepower and 180 lb-ft of torque, so don’t plan on going anywhere in a hurry. This engine does unlock the Tacoma’s maximum 1,685-pound payload capacity, however.

The available 3.5-liter V-6 is standard on a number of trims and far more common than the loss-leader four. It makes power comparable to the Ford: 278 horsepower and 265 lb-ft of torque. The maximum towing capacity is 6,500 pounds.

The Takeaway: The Ranger’s turbo-four is a powerful, strong engine, but traditionalists will likely gravitate to the Tacoma’s muscular V-6 and six-speed manual. 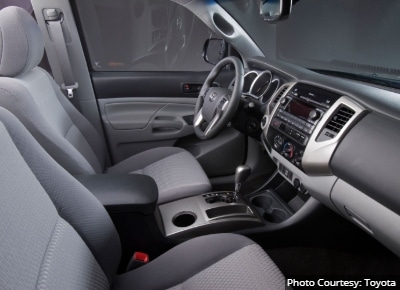 These being affordable midsize trucks, luxury isn’t really part of the equation the way it is for full-size pickups. Ritzy models like Ford F-150’s King Ranch trim or the Tundra’s 1794 Edition didn’t make the cut for the more midsize lines. Expect workaday materials and function over form even on the top trims of both trucks.

The Tacoma has been around for some time now, so it doesn’t exactly feel cutting-edge in its layout or design. We do commend Toyota for updating it with today’s tech, however. Base models get a 7.0-inch touchscreen as standard, while all trims use an 8.0-inch touchscreen. Apple CarPlay and Android Auto compatibility are standard, and wireless charging and multiple USB ports can be ordered.

Though it debuted on our shores just three years ago, the Ranger has actually been in its current form for quite some time in overseas markets. That pegs it to the same era of the Tacoma’s last major overhaul, and the interior is archaeological evidence of this. It matches up well against the Toyota but feels outdated against newer products.

The Ranger’s technology isn’t lacking either, however. The base model doesn’t offer much in the way of infotainment, but all other models feature an 8.0-inch touchscreen that comes standard with Apple CarPlay and Android Auto, as well as SiriusXM radio. Navigation is optional, as is a 10-speaker Bang & Olufsen audio system.

In both trucks, the crew cab is the one to have on account of its spaciousness and usability. The Ranger has 34.5 inches of rear legroom; the Tacoma has 32.6 inches. The extended-cab designs on both are best utilized for in-truck storage - they offer only the most primitive seating options, and not even the dog will want to sit back there for long.

The Takeaway: The Ranger has the bigger back seat, but otherwise these trucks are pretty much dead even as far as the interior goes thanks to similar technology, quality, and design. 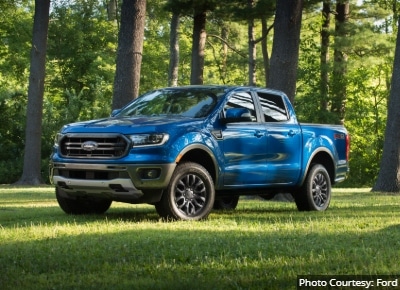 Toyota doesn’t shy away from loading up its vehicles with safety equipment, and as a result, the Tacoma has the most driver assists in its segment. Among its standard safety gear are automatic emergency braking, adaptive cruise control, lane departure warning, and automatic high beams. Among its optional features are blind-spot monitoring, rear cross-traffic alert, and even a surround-view camera.

The Ranger can’t keep up with that list. It gets standard automatic emergency braking - and that’s it. Optional on the base model and standard elsewhere is lane keep assist, automatic high beams, blind-spot monitoring, and rear cross-traffic alert. Parking sensors and adaptive cruise control are optional on the higher trims.

In crash testing, the Tacoma did well, scoring top marks with the IIHS in all but the small passenger-side front overlap test. The NHTSA awarded it four out of five stars overall. Incidentally, the Ranger earned the same final scores as the Tacoma with both testing outfits. The only difference? The Ranger’s headlights were rated Marginal by the IIHS.

The Takeaway: Their older designs don’t make for strong crash-test results, but both trucks offer a nice helping of active-safety features. Hats off to Toyota for making their comprehensive suite of safety features standard. 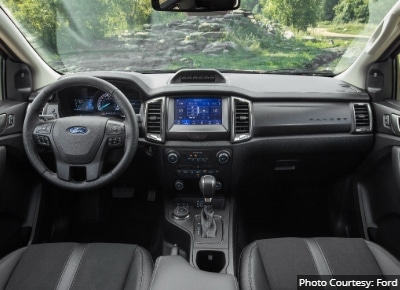 Splurging on either of these trucks is a bit of a dubious thought. This isn’t the case in their base trims - for around $25,000 or so to start, each truck delivers a lot of practicality for the price. The Ranger is especially tempting in its base trimmings, thanks to its powerful turbo-four.

The Toyota’s four-cylinder leaves us cold, but the cheapest V-6 - which starts around $30,000 - is still a tempting truck. Add to it its reputation for longevity and a stellar depreciation record, and you have the makings of an unbeatable deal.

Higher up on the trim ladder is where we grow less enthusiastic. The Ranger tops out with the Lariat, which begins at $34,105. It feels a bit expensive to us for a truck that has been around for years without a major redesign, but it does get the full gamut of available tech and features. It’s a good deal overall.

The Tacoma has a higher price ceiling - much higher. If the TRD Pro tickles your fancy, plan on spending over $45,000. For reference, you could buy a well-equipped full-size pickup at that price. Of course, the TRD Pro comes with some serious off-road capability, but there’s also the potent Jeep Gladiator and Chevrolet Colorado ZR2 on the market as well.

The Takeaway: For either truck, get an entry-level model. The top end of the lineup blurs the value proposition, and at a certain point you’re better off shopping the larger, faster, stronger full-size pickups.

Which Is Better, the Ford Ranger or Toyota Tacoma?

Objectively, we like the Ranger. It has more towing and payload capability, a stronger engine, and tech that’s as good or better than the Tacoma.

But many buyers swear by the Tacoma’s sterling reputation, and we can’t blame them - it’s a truck that won’t let you down.  Yet the Ford just feels hipper to the current era, so it’s our choice between the two.

Which tows more, the Ford Ranger or Toyota Tacoma?

The Ranger. With the right options, it will tow 7,500 pounds, which is 1,000 pounds more than the Tacoma can muster.

Which has the higher payload, the Ford Ranger or Toyota Tacoma?

The Ranger, which can haul up to 1,860 pounds in the bed. That’s about 200 more pounds than the Tacoma can manage.

Which is more efficient, the Ford Ranger or Toyota Tacoma?

The Ranger. Its modern turbo-four engine enables EPA estimates of up to 21 mpg city and 26 mpg highway for two-wheel drive models. The most efficient Tacoma is rated for 20 mpg city and 23 mpg highway.

Which is better for off-roading, the Ford Ranger or Toyota Tacoma?

The Tacoma wins this one thanks to the TRD Pro trim. It features all-terrain tires, unique long-travel shocks, and a lifted suspension. The Ranger’s FX4 optional package is more affordable but not nearly as effective for conquering trails.