Best Off-Road Trucks: Which Is the Most Capable?

Pickup trucks, being extremely versatile, are often the favored off-road machine of choice.

This list of best off-roaders will focus on midsize, full-size, and heavy-duty truck choices. We are evaluating and ranking based on factory builds rather than custom configurations.

Wherever possible, we will list the specific model and trim level we are ranking.

What Is Off-Road Capability?

Going off the road can mean different things to different people.  In general terms, off-roading is leaving paved roads for less established dirt roads and trails and, sometimes, leaving all semblance of a path behind to follow the compass. Off-roading includes trailblazing, trail conquering, overlanding, mudding, rock climbing, and a lot more.

For our purposes here, we will focus on generalized off-roading that may encompass some or all of those things. We’re considering trucks for their general off-road capability, not necessarily for specialty in any single type of off-road adventure.

Thus, the trucks we’re evaluating will have three major criteria: ground clearance, approach/departure angles, and payload capability. The first two are important for getting through and over terrain, and the latter is important for hauling the stuff you will need once you get where you’re going. The rest of our evaluation is based on our experience going off the road with these pickup trucks. 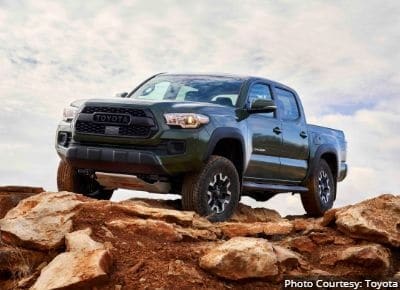 The Tacoma is the best-selling midsize truck for several reasons, not the least of which is the extreme capability of the off-road-oriented TRD Pro model. Advanced equipment such as a locking rear differential, internal bypass shock absorbers from Fox, an upgraded exhaust for better performance, an off-road camera system, and protective skid plates underneath all add up to a very capable machine.

The Tacoma TRD Pro has good ground clearance and edge angles for getting into and out of tough terrain. The lighter-duty off-road variants in the Tacoma line up, like the TRD Sport and TRD Off-Road, are not as capable, but still fine general duty off-pavement options. 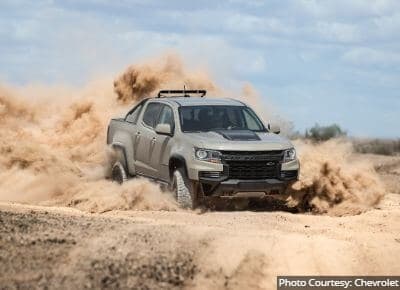 The ZR2 trim comes standard with the V6 engine, but has a diesel engine upgrade option that may appeal to many. Suspension is raised and has special off-road dampers added for better performance in all-terrain situations, and the knobbier tires included are more astute at off-pavement going. The locking rear differential and added underbody protection are also great additions here.

Of the three in our grouping of midsize trucks, the Colorado ZR2 was the most rock-climbing-ready with better breakover angles than the others listed, but it came up a little short in higher-speed off-road running and during the harder knocks. However, it’s a great overall option, and its interior is the most upscale of this lineup. 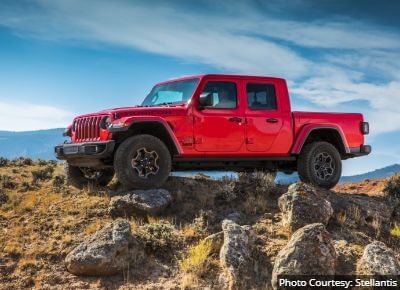 The Jeep Gladiator takes elements of the legendary Jeep Wrangler line and adds in the capabilities and functionality of the Ram Truck brand. As a sort of mashup between a Wrangler Unlimited and a Ram 1500, the Gladiator is both a true off-road machine and a true pickup truck. The Rubicon model includes heaps of off-pavement goodies like improved axle ratios, big tires, locking front and rear differentials, an electronic-disconnecting front stabilizer, rock rails, and more. Of the three on our list, the Gladiator Rubicon is definitely the most off-road-ready on paper.

In practice, however, the Gladiator suffers from a longer wheelbase versus its rivals, a less apt breakover angle as a result, and less absorption of the terrain altogether. The diesel engine option is a boon, but is loud and unrefined when compared to the Chevrolet. We will note, however, that of the three on our list of midsize trucks, the Gladiator is the most aftermarket modification-ready with more options and potential added capability than either of the others on our list here. Including the larger trucks to come. 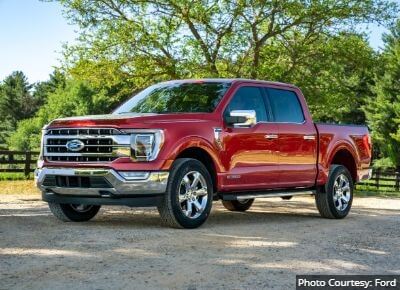 The only truck on our list here with a turbocharged V6 that’s both fuel-efficient and powerful, the Raptor also boasts a 10-speed, sport-tuned transmission and an unusually astute, adaptive suspension. The Raptor is adept at both high-speed off-road antics and low-gear crawling with excellent wheel reach and power delivery.

The F-150 Raptor has earned a reputation as a sport full-size truck and heralded the return of the segment, paving the way for others to follow. For the 2021 model year, Ford is adding a Tremor off-road package for the F-150, but that was not yet available at the time of this writing. 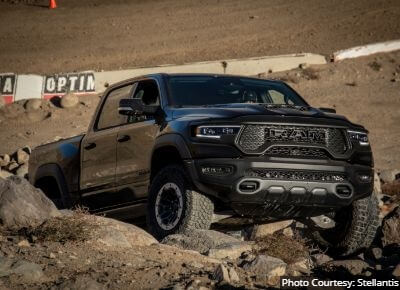 Until the introduction of the TRX (aka “T-Rex”), the Ram Rebel was the most off-road-oriented truck in the Ram lineup. With the TRX, Ram took things to new (almost ridiculous) levels by adding a supercharged V8 engine, a 2-inch suspension lift, 35-inch all-terrain tires, a robust Dana 60 rear axle, skid plates, and adaptive dampers with remote reservoirs. With the TRX, Ram mated a drag racing Hellcat with a pickup truck.

In our grouping of full-size trucks, the TRX is by far the most powerful and gives the Raptor a run for its money in capability, but all of that power comes at a price: weight. The weight distribution of the engine and powertrain in the big Ram TRX and the huge amounts of power it delivers with every pedal press is difficult to control in some off-road situations. 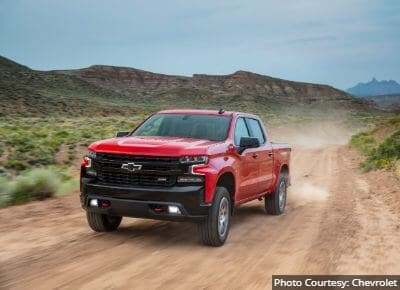 The Silverado in its LT Trail Boss configuration is a good, general off-road rig. It comes standard with a V8 engine, adds a transmission air cooler and heavy-duty battery, and improves front seating with more aggressively bolstered buckets for better stability when bouncing off the pavement. It adds to the Z71 off-road package with larger tires and wheels, a locking rear differential, and improved suspension components.

All of these things add up to solid, general use off-road with some capability beyond the norm. The full-size Silverado LT Trail Boss is not as astute as the more focused Ford and Ram trucks on this list, but it’s often underrated for its capability. 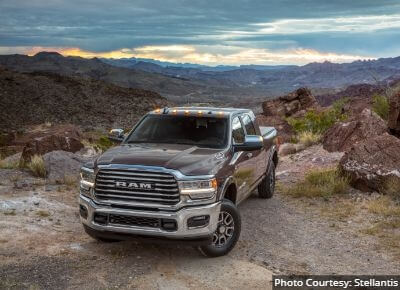 The Ram Power Wagon has long been the epitome of heavy-duty trucks for off-roading, dominating the scene for years. With a disconnecting front sway bar for better wheel reach, performance-tuned shock absorbers, locking front and rear axles, an electric winch, and underbody protective plates, the Power Wagon has everything.

Until the advent of the Ford Super Duty Tremor, below, the Power Wagon was the undisputed king of the roost. Now, its hold on the top spot is more tenuous, but the Ram keeps its spot here thanks to its storied capability and its more all-around capability of design. 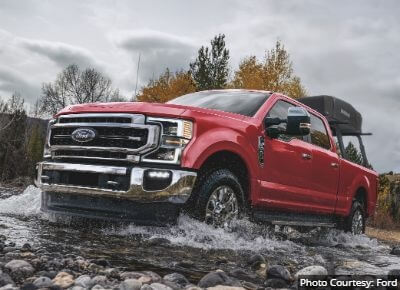 The Tremor loses to the Power Wagon only because of its inferior wheel reach in many off-road situations and its lack of a front locking differential (important when rock crawling, for example). It gets a leg up for its ability to house Ford’s large 6.7L diesel engine. 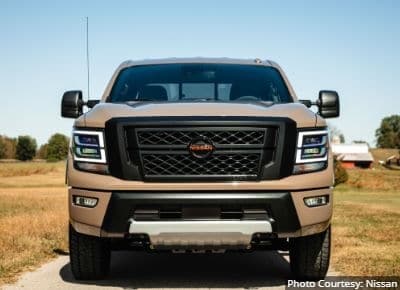 The Nissan Titan XD is not quite a three-quarter ton pickup and not quite a half-ton. It fits in the middle, offering some of the benefits of both segments. In its Pro-4X package, it’s a much more capable off-roader than most would assume. This package adds larger tires and wheels, improved shock absorption, protective skid plates, a locking rear differential, and a powerful, smaller-displacement V8 engine.

The Nissan Titan XD Pro-4X is not as off-road-centric as the above two heavy-duty trucks are, but holds its own in most general off-road situations.

What is the best midsize off-road truck?

Based on our research and personal testing, we found the Toyota Tacoma TRD Pro to be the best midsize off-road truck. The Chevrolet Colorado ZR2 comes in second, and the Jeep Gladiator Rubicon comes in third.

What is the best full-size off-road truck?

Based on our research and personal testing, we found the Ford F-150 Raptor to be the best full-size off-road truck. The RAM 1500 TRX comes in second, and the Chevrolet Silverado LT Trail Boss comes in third.

What is the best heavy-duty off-road truck?

Based on our research and personal testing, we found the RAM 2500 Power Wagon to be the best heavy-duty off-road truck. The Ford F-250 Super Duty Tremor comes in second, and the Nissan Titan XD Pro-4X comes in third.

How much off-road equipment do I need?

Most trucks with four-wheel drive are capable of standard off-pavement tasks such as driving on dirt roads, getting to the backside of the farm on dry dirt, and so forth. When the requirements are more demanding, such as hitting harder trails or climbing through the wilderness in bad weather, more robust equipment is needed.

What are the advantages of smaller trucks off-road?

When off the pavement, especially when out in the bush or meeting with difficult terrain, smaller trucks have an advantage thanks to their shorter wheelbases and thinner track (wheel or overall width). Bigger trucks, however, have more powerful engines and can carry more stuff to wherever it is you’re going. So there is a tradeoff.

Why are off-road trucks so expensive?

Most trucks are expensive when compared to the pickups being sold two decades ago. However, trucks made for off-road-specific use are much more expensive than their counterparts because they have costlier components to beef up capability and are in higher demand by consumers. This adds up to higher prices.