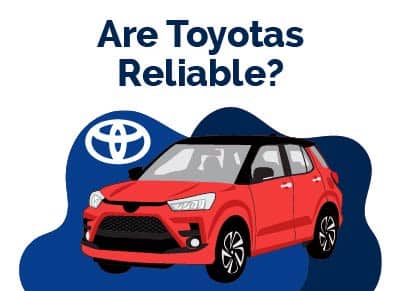 There is simply no doubt that Toyotas are highly reliable. However, it is worth it to figure out why Toyota cars are considered reliable.

Toyota has held an everlasting record of reliability for many years, creating dependable cars with low maintenance and repair costs and a lesser chance of visiting the mechanic for major or minor repairs.

The reliability of Toyota cars is so high that you can still find up to 80% of Toyota cars sold 20 years ago on the road. This is because of the consistently high quality in design and construction that the Toyota brand maintains.

Unlike many other brands, Toyota is not in the habit of introducing “unverified” features to its cars. This has helped the car earn a high safety rating, with few recalls. We can’t fail to mention Toyota’s impressive engines, amazing performance, and fuel efficiency.

Let’s take a closer look at Toyota’s reliability and everything you need to know about the auto brand.

Yes. Toyota is a highly reliable car. Toyota has built a legacy of reliability, blueprints that other brands try hard to replicate. Their reliability is so profound that many drivers rely on them for safety and durability.

It shouldn’t be new to anyone that Toyota is part of the few brands with cars that can last past 40 years, with you having to deal with only routine service and maintenance.

While we commend Toyota for its reliability, we noticed that the reliability of Toyota is dropping as each year passes by, as they seem to hardly maintain the same standard of excellence that they were known for.

The setbacks in Toyota’s reliability seem to be coming from issues that they ignore, and these problems pose great risks to the safety of users.

From 2016 to 2018, Toyota spent over $3.4 billion settling class-action lawsuits for rusted frames in its trucks and 4-Runners. Close to 200 class action lawsuits were filed against Toyota in state and federal courts.

This is not impressive news for what once was a super reliable car. This implies that, though Toyota cars are still reliable, they are not the most reliable car brand in the market.

Toyota holds a 4.0/5.0 reliability rating, ranking 8th out of 32 car brands. The reliability rating of Toyota varies across different survey reports. Telegraph places Toyota in the 9th position for dependability.

Consumer reports survey ranks Toyota 2nd amongst 26 car brands, while Toyota ranks 4th on the Reliability Index. Toyota’s safety ratings on IIHS are also high, and there are a few factors that we believe are the reasons why Toyota is so reliable.

Why Toyotas are Considered Reliable

Toyota cars can last up to 200,000 miles, or as long as 300,000 miles, with proper maintenance. The long lifespan of Toyota cars is due to their build quality, engine strength, and the use of high-quality materials.

Toyota’s design philosophy is all about building reliable cars that are exciting and comfortable. This has led the company to optimize functionality above a fast launch. The goal is to introduce features that will offer long-term benefits and not rush to deliver packages that will dominate the market but won’t last the test of time.

From its choice of sheet metal to plastics and leather, Toyota always goes for superior material quality. Aside from a few poor designs, Toyota cars show fewer signs of wear and tear.

Toyota’s safety and technology principle revolves around building and implementing systems that place great importance on the basics.

Toyota is not interested in over-complicating issues; keep it simple but highly functional. This is seen in the impressive package of the Toyota safety sense.

Toyotas are known for using different engines to deliver a wide range of performance to meet their different models.

The reliability of Toyota engines dates back to the 90s with the introduction of the 2JZ engine, which was seen in many Toyota sports cars. Toyota has engines that can comfortably deliver a burst of 700hp.

The high-quality engineering process of Toyota engines makes them attain an exceptional level of longevity and reliability.

This ensures that high-quality delivery is maintained through all production levels to sustain a customer-first and continuous improvement concept in all models.

Toyota takes more time to test its systems before they are released to the market. This is why Toyota releases its features later than other brands, but their features are more stable and reliable after release.

There are a lot of Toyota cars with impressive gas mileage. Ranging from the Toyota Prius Hybrid, Toyota Corolla, Toyota Camry, Toyota RAV4, Toyota Highlander, and Toyota Venza to the Toyota Avalon. You can choose between the hybrid and gas-powered engines for the most reliable, fuel-efficient Toyota car to meet your needs.

Toyota cars are so reliable that you can expect them to last ages. The reliability of Toyota cars varies across different models. You can get the best Toyota reliability from models like; the Toyota Camry, Toyota Prius, Highlander, Rav4, and Corolla.

It is important that you choose the model that meets your needs.

Are Toyotas expensive to maintain?

No. Toyotas are not expensive to maintain. The average annual cost of maintaining a Toyota is $441. This is lower when compared to the $652 cost for the industry car.