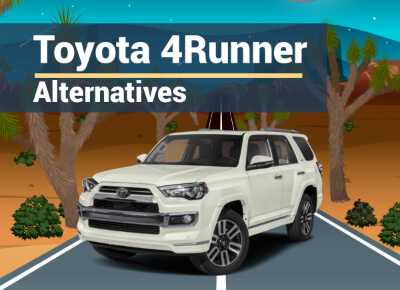 The Toyota 4Runner is a much-loved five or seven-passenger SUV. The rugged 4Runner has built a solid reputation for reliability, durability, and quality. The 4Runner can be a family vehicle or an overlander.

The 4Runner really occupies two segments. First, it competes with vehicles like the Jeep Wrangler. Second, it also fills the same roles that the tamer Toyota Highlander does for many owners.

Our alternatives for the 4Runner will include both serious off-roaders and some crossover SUVs that can fill the family-oriented utility roles and still get your kayaks to the lake.

The Takeaway: The 4Runner is a proven SUV with many fans, but it is a narrow product line and has infotainment that could be better. 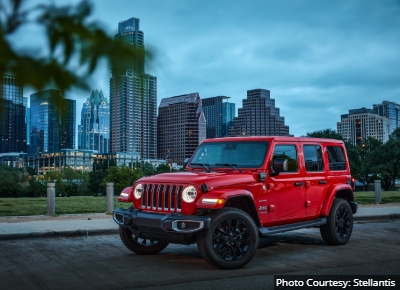 The Jeep Wrangler competes well with the Toyota 4Runner for those seeking a five-passenger SUV that can go off-road. Jeep’s line includes both two and four-door models and a wide array of trims and options that Toyota cannot match. The Jeep also features multiple convertible options, doors that come off, and a windshield that drops down.

Jeep also offers three years of included maintenance compared to Toyota’s two years. Finally, you get to enjoy a friendly wave from legions of fellow Jeep owners as you pass them in traffic.

The Takeway: Those seeking outdoor adventure will find the Jeep Wrangler SUV line has everything the 4Runner offers and much more.

You may qualify for additional deals and incentives, check out this month's Jeep deals and average prices paid. 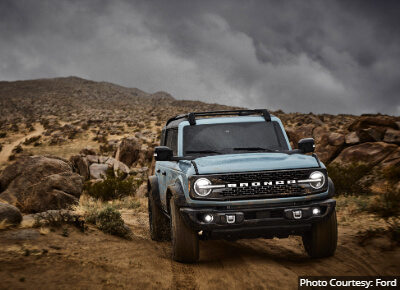 The Wrangler is no longer the only game in town for those that want a truly off-road SUV. Ford has brought back the Bronco and went all-in. The Bronco line is just as expansive and all-encompassing as the Jeep line and has many of the same cool features, such as removable panels.

Like the Wrangler, the Bronco is a two-row SUV with seats for five. It has the locking differentials, a detachable front sway bar, a low range transfer case, and all the other hard-core rock hopping and mud whomping stuff serious off-roaders look for.

Did we just lose you? No worries. Our next couple of alternatives are for folks who don’t speak 4X4.

The Takeaway: The Ford Bronco is yet another choice for serious off-roaders. 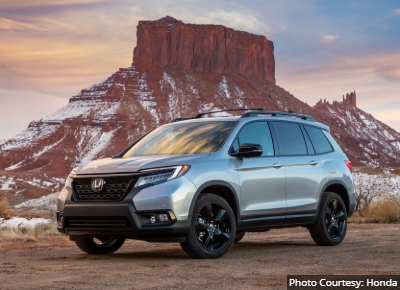 Honda wants in on the adventure SUV market, but understands its owners aren’t headed to Moab directly from the dealer lot. To add more off-road chops than any prior Honda, the company adapted much of the Pilot’s basic formula to one that will go farther and be more utilitarian. In the process, it dropped the third row.

The Passport counts among its advantages over the 4Runner, better on-road driving dynamics and better infotainment. Inside, the Passport has a massive cargo area behind the second row. Drop the seats, and you could slide in a small kayak or a pair of fat-tire bikes.

Honda is the brand for practical people who like things neat and square. The Passport fits the bill.  Unless you want serious off-roading for the sake of it, the Passport will likely be more than enough for your weekend adventures in nature.

The Takeaway: If you are team Honda and want to know which model they produce that might be an alternative to the 4Runner, this is it. 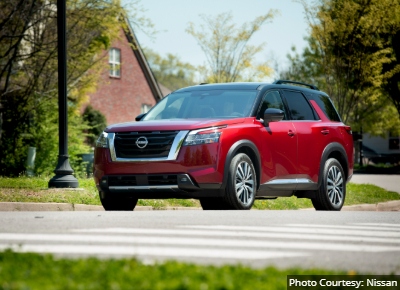 Before you shrug off the Pathfinder as a mall-crawler, bear in mind it was recently redesigned and has more power than the 4Runner and can tow 20% more. We also found the infotainment system to be simple and effective.

We recently tested the new Pathfinder and found it to be more rugged than the prior generation, and we're pleased to see a multi-terrain drive selector switch. Even our mid-trim tester had a proper trailer hitch integrated into the rear end. The Pathfinder may not win a king of the mountain match with the 4Runner, but getting to the mountain will not be a problem.

The Takeaway: The Pathfinder is a great alternative to the 4Runner for families that need all-road capability and want three rows of seating. 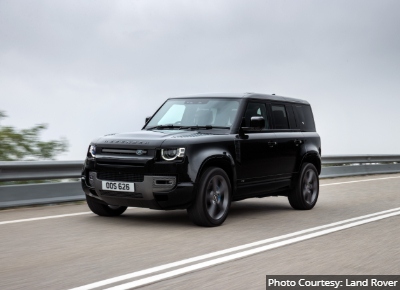 Why not stretch the budget a smidge and drive home in something a bit more interesting than the everyman’s 4Runner?

Land Rover’s new Defender is available in a wide range of prices that overlap the 4Runner, has a similar 5 plus 2 seating option available, and looks so much cooler.

The Defender is a half and half vehicle that combines many of the best elements of a crossover SUV with a body-on-frame SUV. It has the ability to go anywhere a 4Runner can and a legacy the 4Runner can only aspire to.

The Takeaway: The Land Rover Defender is a “think outside the box” alternative that matches up surprisingly well with the the 4Runner.

You may qualify for deals and incentives, check out this month's Land Rover deals and average prices paid.

What can I get instead of a 4Runner?

The Toyota 4Runner seems to gain new competitors with each passing year. Those looking for a five-passenger off-road SUV can now choose from the Jeep Wrangler or the Ford Bronco. Those who want a 5+2 SUV should give the Land Rover Defender a look. If you don’t need a serious off-roader, the Honda Passport and Nissan Pathfinder are perfect substitutes with many advantages.

Is the 4Runner outdated?

Heck yes! The 4Runner is outdated and not by accident. Toyota has retained the 4Runner’s classic body-on-frame 4x4 design while also offering a wide range of crossover alternatives.

Are Toyota 4Runners worth the money?

Yes, assuming you pay near MSRP, a Toyota 4Runner is like money in the bank. The vehicle depreciates very differently than most of the industry’s similar vehicles. Like the Jeep Wrangler and Toyota’s Tacoma, a Toyota 4Runner barely depreciates if kept in good conditions and with limited miles.

Neither is better. One is an SUV (4Runner), and one is a midsize pickup truck. Both have many worthy competitors that are arguable “Better.” These include the Jeep Wrangler and Ford Bronco SUVs, and the Nissan Frontier and Jeep Gladiator pickups.