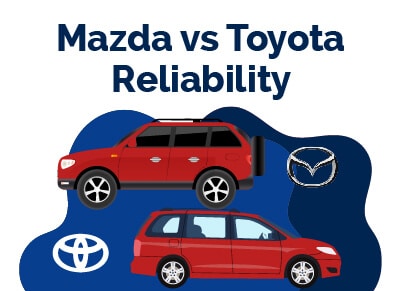 Mazda is the no. 1 most reliable car brand in the automobile industry. It is surprising that even though they are not as popular as Toyota, Mazda is slightly more reliable than Toyota.

It is a hard call to compare Toyota and Mazda cars. This is because both cars are symbols of Japanese engineering strength. Both Toyota and Mazda have lower repair and maintenance costs, although it is cheaper to maintain a Toyota. Toyota sells more cars than Mazda, but the reliability of Mazda cars is underrated.

Mazda achieves higher dependability than Toyota, great fuel economy, and higher build quality. On the other hand, Toyota beats Mazda with higher safety ratings. Both cars have impressive design and engineering principles, but you can rely more on a Mazda car than a Toyota to last more than eight years without any problem.

Here’s a review of Mazda vs. Toyota’s reliability and how Mazda is better than Toyota.

Which is Better: Mazda or Toyota?

Mazda is better than Toyota in certain areas, especially when it comes to reliability and build quality. Mazda rose to become the most reliable car brand in 2020, with a reliability score of 83/100, ranking above Toyota and Lexus. This was before Lexus took place, with Mazda coming in second place.

This was only for Mazda to beat the competition by becoming the most reliable car brand, according to Consumer Reports 2022 survey. This is with Toyota earning a Reliability score of 74, ain’t too bad for a score, but it places Mazda above Toyota.

You must understand that the reliability ratings of Toyota and Mazda also vary according to their models. Toyotas are cheaper to maintain, probably due to the easy access to their parts.

However, a Mazda car offers you the opportunity to visit the repair shop less. Mazda is one of the few cars you can drive for over 150,000 miles without drama or problems. A feat that is not guaranteed with Toyota cars.

It is not a secret that Toyota offers moderate power, and you should not expect a burst of speed from Toyota cars. This differs from Mazda, which offers performance options to drive; fun-to-drive cars with impressive speed and torque.

Mazda is your best choice if you need a sporty car with great power that you can rely on. Toyota is an amazing company with superb engineering principles, but Mazda improves its systems more than they do.

Mazda and Toyota have great designs. While Mazda emphasizes building a connection between users and their cars, Toyota optimizes functionality. The Mazda design emphasizes elegance, optimizing beauty in a perfect blend of functionality.

Mazda designs its cars as a work of art. Although Toyota cars are not bad, Mazda does better, especially with interior designs. All Mazda cars have a compelling design that poses like they are speaking.

The designs of both Toyota and Mazda cars scream durability. There are zero chances that your Toyota car will leak oil after 100,000 miles, just as on Mazda cars. Both car brands have their design principles embedded in Japanese culture.

The Mazda design features Takumi, Kodo, and Takuminuri. This design philosophy embodies the use of professionals, masterful expertise, and the need to drive home perfection.

From Mazda’s unique paint technology, hand-designed interiors, and use of the best quality materials, Mazda’s designs are structured to breathe life into their cars.

Toyota’s design philosophy follows similar ideologies but in different forms. Toyota employs Jidoka, Kaizen, and Total Quality Management (TQM) systems. This explains the use of human construction blended with automation, high-level supervision, and the integration of a customer-first approach.

This indicates that the long-term cost of ownership of a Mazda car is cheaper than a Toyota.

Toyota and Mazda cars are extremely durable cars. However, Mazda is more durable than Toyota. Mazda achieves a better finish and build quality than Toyota cars.

For someone with experience driving a Mazda MX-5, the car went up to 8 years without any problem. I don’t think any Toyota car can go that far without experiencing problems. You must understand that the durability of Mazda and Toyota varies on different models.

We can’t deny that Mazda and Toyota have an amazing lineup of engines, but Mazda tends to be more focused on improvements and advancements. They tried out the consistent use of 4-cylinder engines, and it worked; the SkyActiv platform, Wankel engine, and refined approach to turbocharging.

One of the best things about Mazda and its engines is their concern for overall efficiency. This ushered in the need to build a simple solution that increases the efficiency of their powertrains, as well as fuel economy. Mazda achieved this with the launch of Skyactiv technology.

Compared to Toyota engines, you will get better handling from Mazda, a better burst of power, and speed. However, Mazda faced many setbacks with its Rotary engines.

The Toyota brand is not the type of company that rolls out innovations as frequently as possible. This is a good sign because they take their time to thoroughly test those systems before launch, but it also reduces the speed of improving their systems.

Gas mileage is one of the crucial areas that every driver considers before buying a car. You wouldn’t want to buy a car that will drill a hole in your pocket when you are out to buy gas.

Mazda utilizes the Skyactiv technology to improve fuel economy without compromising the car’s efficiency. The Skyactiv Mazda technology is designed to get the most out of every drop of fuel. Unfortunately, even with the improved fuel systems on Mazda cars, Toyota returns a better gas mileage.

For instance, you will get a better fuel economy from the 2022 Toyota Corolla than from the Mazda3. Toyota harnesses the advantages of engine size and technology to achieve a better gas mileage. The smaller the engine, the less gas needed to power it up.

Mazda and Toyota take passenger protection seriously, as seen in their technology implementations and safety measures. Mazda incorporates the use of ultra-high tensile strength steel. This reduces the level of impact and damage done during a collision.

Toyota rolls out its safety technology as upgrades. There’s the Toyota SafetySense 2.0, 2.5, and we expect the 3.0. In all these, it is important to cite that Toyota has more cars with high safety ratings on the IIHS Top safety pick (+) rating.

Your choice between Mazda and Toyota lies in what your needs are. Why do you want to buy a car? For performance? Fuel economy? Or maybe safety?

Toyota cars are cheaper than Mazda, so you might consider your budget when choosing between these two brands. Depreciation is lower on Toyota cars, with better gas mileage and cheaper maintenance cost.

Why are Mazda cars not as popular as Toyota?

Mazda is an underrated car brand. They are a small car brand compared to Toyota. It is important to cite that Mazda doesn’t have as many models in its lineup as Toyota. They present themselves as a niche car brand, building more performance cars.

Do Mazdas hold their value?