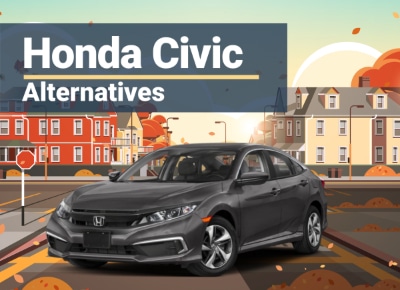 The Civic led the segment in sales for 2021 in the United States, ranking second among all cars behind only the Toyota Camry. Like all compact cars, the market shift to crossovers has caused a decline in Civic sales, but it continues to be a leader in segment sales.

There are several key competitors from other Japanese automakers along with two relative newcomers from Korea and a tried-and-true German option.

Here is a look at the top five current competitors for the Honda Civic. 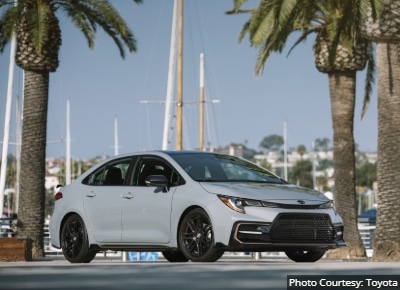 The Toyota Corolla ranked second in segment sales in 2021, trailing the Honda Civic by about 15,000 units. Like the Civic, the Corolla is offered as a sedan (which is the focus of this piece) or a hatchback, but it is significantly smaller on the inside, with about 10% less passenger space and cargo space than the Honda.

Like the Civic, the Corolla is offered with a base engine and a premium engine, but they both offer less power than the comparable Honda engines. If you want a more fun-to-drive factor, Toyota does offer a 6-speed manual transmission with the premium engine whereas the Civic is only offered with a Continuously Variable Transmission (CVT), but in addition to packing less power, the Corolla also gets worse fuel economy with both engines options.

In short, the Corolla has less interior space, less power, and gets fewer miles per gallon, but it has two key advantages. First and foremost, it has a starting price that is more than $2,000 lower, and second, Toyota has a remarkable reputation for quality, durability, and value. While Honda models have also proved to hold their value thanks to excellent long-term reliability, there is no brand with a better overall reputation for longevity than Toyota.

The Takeway: The Toyota Corolla requires some compromises in power, fuel economy and interior space, but it costs less, it holds its value better and has the stronger reputation for durability. 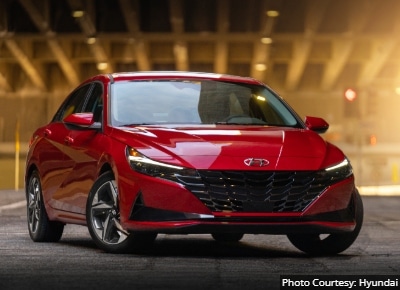 If you're looking for a compact sedan with a little more passenger space and better fuel economy than the Honda Civic, the Hyundai Elantra is a great option. With 99.4 cubic feet, the Elantra offers the most passenger space of the vehicles on our list, but the Honda has a cargo space advantage of a little more than a half-foot. That being said, the Elantra is the roomiest vehicle overall aside from the Civic, comfortably beating the other sedans on our list.

Like the Civic, the Elantra comes standard with a naturally aspirated 2.0-liter engine that is mated to a CVT, but with 147 horsepower, the Hyundai is 11 ponies behind the Honda. The upside to the Hyundai drivetrain is that it yields the best fuel economy of any vehicle on this list, offering 33 city and 43 highway. The Elantra is available in N-Line trim, which is similar to the Civic Si, but unlike Honda, there is no optional engine upgrade for the standard sedan.

The Takeaway: If your key purchase criteria are interior space, fuel economy and a low purchase price, the Hyundai Elantra is the best option in the segment. 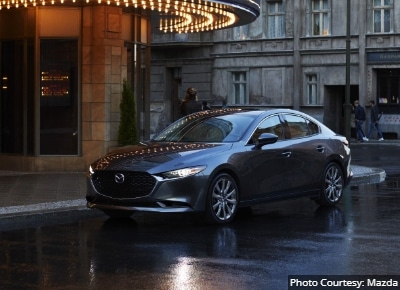 The Mazda3 shares several key traits with the Honda Civic, including the buyer’s choice of sedan or hatchback form and two engine options within the basic model line. The Mazda3 also has the highest price of the Civic competitors on our list.

The Mazda3 is the only vehicle on our list that really competes with the Civic in terms of performance. The base Mazda 2.0-liter engine offers 155 horsepower, 3 less than the base Civic, while the premium 2.5-liter Mazda3 engine delivers 186 horsepower, besting the Honda by 6 horsepower.

The Mazda also comes standard with a traditional 6-speed automatic transmission rather than the CVT that is so popular in this segment, but there is a downside to the Mazda drivetrains. The Civic beats the Mazda3 in city and highway fuel economy by a significant margin with both the base and premium engine.

Where the Mazda3 comes up shortest against the Honda Civic is in interior space. With 6 less cubic feet of interior space and more than a foot-and-a-half less in the trunk, the Mazda is noticeably smaller inside.

The Takeaway: If driving dynamics and power are your key concern when shopping for a new compact sedan, the Mazda3 is the best option on this list. 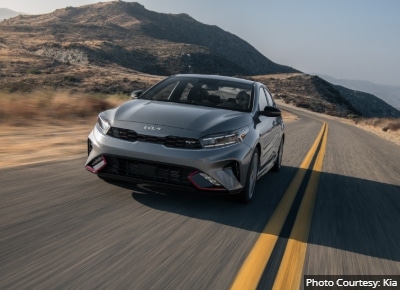 The Kia Forte is mechanically similar to the Hyundai Elantra, but where Hyundai takes a more refined, elegant approach to styling inside and out, Kia goes with a sportier, more aggressive look at feel. As a result, these two closely related Korean sedans have very different personalities.

The Forte comes standard with the same 2.0-liter engine as the Hyundai Elantra with the same 147 horsepower and the same CVT, but due to differences in gearing and weight, the Kia gets slightly lesser fuel economy numbers of 31 city and 41 highway.

The key difference between the Elantra and the Forte is that the turbocharged engine of the Hyundai N-Line is offered as a basic trim level in the Kia. This boosted 1.6-liter engine delivers 201 horsepower, making it the most powerful engine in this discussion. Also, rather than the CVT, the turbocharged Forte comes with a dual-clutch gearbox that yields far more pleasurable driving dynamics.

The other key difference between the Forte and the Elantra is the positioning and form of the interior. The Hyundai leads our discussion in passenger space with 99.4 cubic feet, 0.4 more than the Civic, but the Forte has just 96 cubic feet of passenger space. On the other hand, the Kia trunk is quite a bit bigger, offering 15.3 cubic feet of space – the most on our list.

The Takeaway: If you are looking for the sportiest compact sedan without a huge compromise in fuel economy, the Kia Forte with the base engine is a great option. 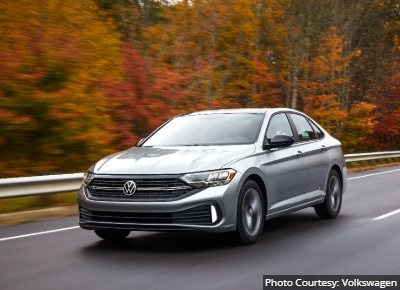 If you want a standard turbocharged engine and a standard manual transmission at a low price point, the Volkswagen Jetta is the best choice in the segment. While the Jetta’s turbocharged engine delivers 147 horsepower – 11 less than the base Honda Civic – the power delivery of the boosted engine coupled with the manual transmission yields a much more engaging driving experience. Also, with an official rating of 41 miles per gallon on the highway, the Jetta is slightly more fuel-efficient than the base Civic engine.

The Volkswagen Jetta pricing starts at just $18,995, making it the most affordable vehicle on our list, $3,355 less than the base Honda Civic.

Of course, there are some compromises required for those who opt for the Volkswagen Jetta over the Honda Civic. Most notably, the Honda offers just over 4 more cubic feet of passenger space along with a little more than a half-foot of cargo space in the trunk. The Jetta also has more subdued styling, which could be good or bad, depending on your personal preference.

Takeaway: If you want to pay as little as possible for your new compact sedan, the Volkswagen Jetta is the best option on the market today.

You may qualify for additional deals and incentives, check out this month's VW deals and average prices paid.

What body types are offered for the current Honda Civic?

The 2022 Honda Civic is offered as a four-door sedan or a 5-door hatchback. The Civic was also offered as a coupe through the 2020 model year.

Which alternative to the Honda Civic offers the most power?

Which alternative to the Honda Civic offers the best fuel economy?

Which alternative to the Honda Civic is the most affordable?

The Volkswagen Jetta starts at $18,995, making it the most affordable sedan in the segment.