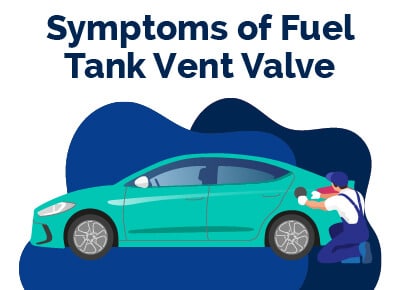 The fuel tank vent valve, also known as the canister purge valve, is an integral part of an evaporative emission control(EVAP) system. It works by trapping the fuel vapors in a charcoal canister.

The EVAP system will allow the fuel vapors to be released into your vehicle once it starts to run at a regular speed.

This happens through the control of the canister purge valve, which regulates the amount of fuel vapor that enters your engine.

The fuel tank vent valve is also known as a solenoid. The most common symptom with the fuel tank valve is when it gets stuck open or closed.

What is a Fuel Tank Vent Valve?

Cars have an evaporative emission control system designed to prevent the vapors from escaping from the fuel tank.

The system also controls the flow of air out of the charcoal canister. This component is called an EVAP vent control valve. In some cars, the canister close valve is additionally used.

In some vehicles, the valve is placed near the canister. In others, the component is fixed separately close to the canister.

The car's engine computer controls the vent valve. The valve closes when the computer determines a leak in the EVAP system.

If the issue is detected, the light on the dash will indicate that there's a problem.

Sometimes, the vent valve of a vehicle becomes blocked with dirt and debris. This issue can be caused by the valve's location on the vehicle's underside.

A professional mechanic will inspect the valve to ensure it is not a problem.

If the vehicle's vent valve is not working correctly, the mechanic will either replace or clean it. They will also determine the cause of the issue.

If the vehicle's vent valve gets stuck open, it can cause the check engine light to come on.

A professional mechanic will then determine the cause of the issue and recommend the necessary repairs.

One of the most common reasons a fuel vent valve fails is corrosion.

This is because the valve's environment is constantly exposed to various types of dirt and temperature.

Once it gets corrupted, the valve will either open or completely fail.

Development of symptoms in a car is essential as they help point you in the right direction of what is wrong with the vehicle.

It is also essential to be able to recognize these symptoms. The fuel tank vent valve symptoms include the following:

1. Pressure in the gas tank

An issue that can be related to the vent solenoid is the pressure in the fuel tank.

If the valve doesn't work correctly, the pressure in the tank might build up and then spill out when the tank is opened. This could cause the transmission fluid to get low.

This is one of the most popular fuel tank vent valve symptoms. This light can indicate that something is wrong with the EVAP vent.

If the computer senses an issue with the vent solenoid, it can set off the check engine light to alert the driver.

If the canister purge valve is not working correctly, it can create a vacuum leak that can affect the engine.

This issue can occur because the air can enter the machine in a quantity not predicted by the computer.

This could cause the car to feel rough and bouncy when running. It can also make the vehicle difficult to start.

If the car is experiencing a rough idling issue and difficulty starting simultaneously, it could be a fuel tank vent valve symptom.

Another issue that can affect the car's operation is the failure of an emissions test.

If the EVAP vent solenoid breaks, it can prevent the system from working correctly.

This could cause the car to fail the emissions test and prevent it from being legally allowed to drive.

The EVAP vent is a crucial component of a vehicle's emissions system. You must contact a professional if you suspect something is wrong with the vent.

Having the car inspected by a technician can help identify the issue and prevent it from happening in the first place.

What is a Fuel Tank Vent?

The perfect combination of air and gas is essential to your vehicle's operation.

This is why the fuel tank vent is necessary. It allows the tank to breathe. It also helps relieve pressure and vacuum.

The continuous expansion and contraction of fuel can be caused by various factors such as temperature.

Manufacturers used gas caps with vents to keep the proper pressure, vacuum, and air in the tank, but this method proved ineffective when the fuel would spill out.

The fuel tank vent line is higher than the other levels on the tank, such as the fuel filler neck.

This ensures that the vapor or condensation coming from the tank cannot get trapped in the vent. Once a trapped line is built, it will eventually purge the vent.

How To Check the Fuel Tank Vent

When checking the fuel tank vent, ensure you're careful, and it doesn't get damaged. Doing so could allow gas to get into the air.

After you've placed compressed air into the air vent line, try to shoot some air into it.

Please remove the fuel tank vent line and blow through it to further diagnose the problem. If it is blocked, you can quickly tell because the line is short.

You can also use compressed air to check the airflow in the tank vent line. Some of these tools have long plastic tubing that can be used to clear out a clog.

After identifying the issue, you can use wasp spray and other accessories. Remember to protect yourself.

Put plastic or wire tubing through the vent to check for any obstructions.

After draining the tank, let the inside air out and try another blow with compressed air.

If nothing seems to be blocking the airflow, try returning to the fuel line and the vent hose.

Once the blockage is sufficiently dealt with, refill the tank.

How Much Does a Fuel Tank Vent Valve Cost To Repair

A fuel tank vent valve repair is typically around $100 to $150 depending on the issue.

If you have one or more of these issues, contact a certified mechanic to get a diagnosis and a quote.

They can perform a replacement for your fuel tank vent valve at home or work for around 30% less than a shop.

Although universal fuel tank vent valves are available, most cars have unique components designed to work with specific vehicles.

So when it comes to replacing a fuel tank valve, it's usually best to use a part that fits a specific vehicle.

What Is Likely to Happen if a Fuel Tank isn't Vented?

Not having the proper fuel tank vent valve can also cause various problems.

For instance, putting the tank under stress from the pressure of the fuel expanding and contracting.

Do You Need a Fuel Tank Vent Valve?

Yes. To prevent the fuel from overfilling, a fuel tank needs ventilation. This can be done through either a gas cap or a specific tube type.

The latter is usually routed higher than the tank to prevent spillage should the fuel get too full.

In other words, the fuel tank vent valve is essential.

Is the Fuel Tank Vent Valve Also a Drain Valve?

Yes, it is. The fuel tank vent valve is a component of the vehicle's emissions system that allows the system to remove the harmful emissions from the fuel.

It gets air into the charcoal canister to maintain the pressure and function properly.

What Happens to the Evaporation Control if the Drain Valve (Fuel Tank Vent Valve) Is Defective?

If the drain valve is not working correctly, it can create a vacuum that can damage the engine.

This can cause the vehicle's air-fuel ratio to change and cause rough idling.