Will a Bad EVAP Canister Cause Stalling? 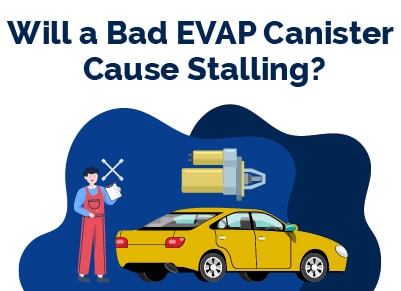 Cars have evaporative emission control system (EVAP) canisters that handle the absorption and storage of gasoline vapors. This plays a significant role in environmental and pollution control. When the EVAP canister goes bad, your car generates a lot of problems.

From engine malfunction, poor gas mileage, reduced engine performance, and engine not starting, the common problems of a bad EVAPcanister are numerous. But does a bad EVAP canister cause stalling?

Let’s explore essential things you should know about a bad EVAPcanister and its impact on your vehicle!

Will a Bad EVAP Canister Cause Stalling?

Yes, a bad EVAP canister will cause stalling, but it greatly depends on how bad the EVAPcanister has gone. When the EVAP canister goes bad, there is a buildup of fumes in the canister. This generates a seizure in the engine, leading to engine stalling.

In most cases, a bad canister will stall after contamination with liquid fuel. When the canister is full of liquid fuel, your car generates a rich/lean oxygen sensor code due to a rich mixture.

A bad EVAPcanister can cause engine stalling through its leaks and cracks. Where there is a leak in the EVAPcanister, the purge solenoid can open, causing a large sip of air into your engine.

Your engine will stall when it starts receiving a large amount of air instead of fuel vapors, especially when you have a closed throttle.

Can an EVAP Leak Cause a Vehicle To Stall?

An EVAP leak can cause a vehicle to stall, but there are more issues that you should worry about. An EVAP leak can also impact your gas mileage and affect your engine performance.

The damage to your car depends on the extent of a leak or how bad the EVAPsystem has gone.

In most cases, if the damage to the solenoid reaches an incredible level, your car’s engine will stall out completely. These leaks can run from the vacuum fee line, control valves, or charcoal canisters.

The EVAPplays a major process in the combustion process of your engine. The EVAPsystem delivers fuel vapors to the engine during combustion. When this process is tampered with, combustion is affected, leading to an  engine completely stalling.

You can easily know that you have a bad EVAPcanister when you notice these symptoms.

But, it goes beyond just controlling the release of gases. It influences the performance of your engine. The EVAP system works as an internal recycling system. Although it cannot lead to imminent damage to your vehicle, it can trigger a check engine light. The EVAP system can influence the gas-air mixture ratio of air in the fuel system.

Because the EVAPsystem influences the combustion process, minor alterations or damages to the system will generate errors and odd readings in your engine performance.

Can an EVAP Leak Cause Loss of Power?

This will result in reduced acceleration and sluggish movement, no matter how hard you hit the gas pedal.

An EVAP leak can cause bad gas mileage. The bad gas mileage caused by an EVAP leak might be too little for you to notice, but we can’t overrule its possibility. Damage to the EVAP system will affect the rolling performance of your car, and this has a direct impact on fuel consumption.

During an EVAP leak, the fuel vapors that should be sent through for combustion either get mixed with air or are sent into the open space. In this scenario, your car loses fuel efficiency.

We’ve revealed some things that will happen if you drive with a bad EVAP canister. The damage goes beyond engine stalling: you also place other road users in harm’s way.

It is your responsibility to take good care of your car, but we advise that you do not overlook the minor issues. Always take your car to a professional repair shop when the need arises.

Can you drive with a broken EVAP canister?

Can a bad EVAP canister cause a misfire?

Yes. A bad EVAP canister can cause a misfire, but this will need a fault extension to your purge valve. The EVAP canister andpurge valve handle the recycling of fuel vapors, ensuring they get to the combustion chamber instead of the atmosphere.

Can EVAP canister cause rough idle?

Yes. A bad EVAP canister can cause rough idling and stalling, and your engine will not start in extreme cases. This usually happens if you have a vacuum leak, failing valve, or a bad EVAPcanister.

When should I replace my EVAP canister?