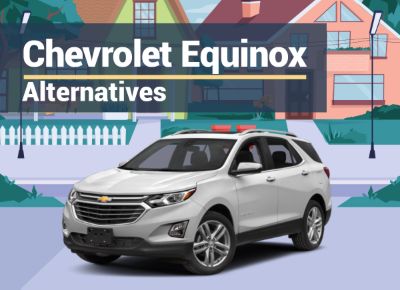 In a marketplace now dominated by crossovers and SUVs of every size, small crossovers such as the popular Chevrolet Equinox draw a lot of attention for their combination of efficiency and economy.

There are good reasons to shop around, especially if you’re looking for a compact crossover that delivers a bit more satisfaction at the fuel pump and a tad more features at the entry-level.

Here is our list of similar vehicles to the Chevrolet Equinox.

The Takeaway: Chevrolet holds the line on Equinox pricing, offering a tidy lineup of four models and few performance choices while sharing its platform with GM family members - the Buick Envision and the GMC Terrain. 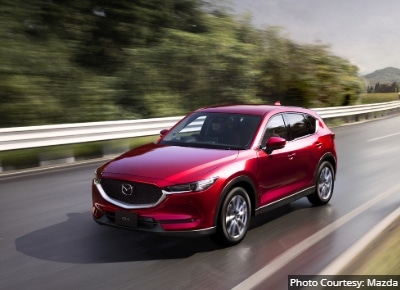 Some might argue that it would be an easy jump to the Mazda CX-5, particularly if one is looking for more performance. The truth is, apples to apples, the CX-5 is pretty much even with the Equinox in that respect unless one looks to the available turbocharged trims of the Mazda. There, with a small sacrifice to fuel economy, the CX-5 is hands-down better, delivering a strong 227 horsepower to the wimpy 170 horsepower of the Equinox.

Not that it’s necessary to move up to the turbo to get a sporty feel in the Mazda. Even in the base Sport trim, handling is spot on. Granted, how one feels in a particular vehicle is a bit intangible, but if you’re trying to mitigate the ravages of middle age, the Mazda definitely has a more youthful spirit about it.

Then again, one of the key attributes of a small crossover is cargo space. Be prepared to give up 4 cu. ft. of it if you’re leaning toward the CX-5 over the Equinox.

The Takeway: Where the base CX-5 Sport nudges out a bit more horsepower, the Equinox will get going a bit more quickly. Evenso, turbo CX-5 trims have a clear performance advantage overall. More significantly, the Mazda offers more standard safety technology. 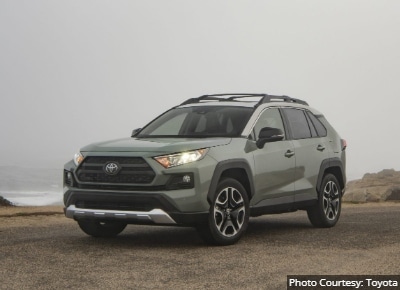 The RAV4 can be credited with inventing the small crossover market segment back in the mid-1990s, so, if anything, it has the advantage of experience. Perhaps that explains why it’s consistently one of the best-selling models. Then again, its dizzying array of offerings – at least 14 – accounts for something. For simplicity and balance, we have excluded the RAV4 Prime PHEV from this comparison.

In terms of performance, the RAV4 has it all over the Equinox. Not only is there more horsepower available, but the hybrid models are rated to tow more weight. Yet, even with the extra power, the RAV4 earns higher fuel economy ratings in both conventionally-powered and hybrid models. Neither the Equinox nor CX-5 is offered in hybrid editions.

In addition, Toyota has long figured out how to bundle a host of safety technologies that make driving not only less accident-prone but less stressful, too. For the Equinox, it seems like a money thing to omit dynamic cruise control in the base trim; for the RAV4, shoppers don’t have to feel that they’re skimping if they opt for the entry-level model.

The Takeaway: Where the RAV4 has a bit less room in the passenger space it makes up for it in total cargo volume with the seats folded down. Call it experience. Toyota has focused on the RAV4 being a purposeful utility vehicle for the family, rather than a family car with utility conveniences. 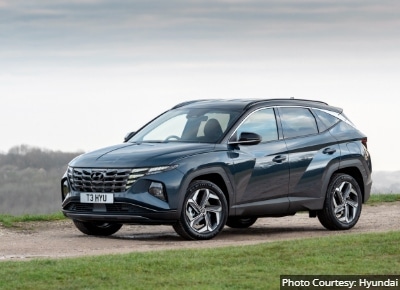 The Tucson could be considered the outlier in this comparison. After all, its interior is noticeably more spacious than the others. However, based on performance and fuel economy, it’s right there in the thick of this compact utility vehicle rivalry. If anything, on an interior cubic foot per dollar basis, it is undeniably the best priced of the lot.

Fortunately, most of us don’t shop for a vehicle in such a single-minded sort of way. To its credit, the Tucson does give shoppers a lot more than just size to go on. Standard features now include blind-spot detection, rear cross-traffic collision avoidance, and a nifty safe exit warning to help prevent passengers from opening a door into traffic.

Interestingly, despite its roominess, the Tucson delivers slightly more highway fuel economy than the Equinox. The Tucson hybrid does even better. It’s not earth-shattering, but in this match-up, for every gallon of gasoline, you’ll get five more miles from the Tucson hybrid in addition to a substantial increase in horsepower courtesy of its combined turbocharged engine and electric motor. One other thing, the Tucson by far has the best warranty in this group.

The Takeaway: The Tucson may not have cornered the market on popularity, but it certainly gives shoppers good reasons to take a closer look. On the warranty alone, this vehicle inspires confidence. None here but Hyundai provide a 10 year / 100K-mile drivetrain warranty. 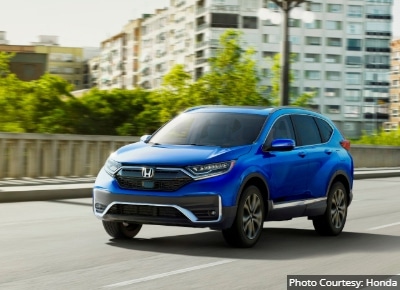 In some parts of the United States, if you stand on the corner of a busy intersection for a few minutes, the likelihood of seeing a CR-V pass by is considerably higher than seeing an Equinox, CX-5, or Tucson. This exercise would certainly validate its popularity. But, as tempting as it is to infer too much from that, being popular does explain its high resale value.

Honda has built the reputation of the CR-V by making it accessible to the needs of a generation of car buyers who have gravitated away from sedans and are seeking a dependable daily driver that’s stylish, purposeful, and economical. Look at the numbers, look at the curb appeal.

There’s more space for people and cargo than in the Equinox, and among this group of crossovers, its fuel economy is second only to the RAV4. Onlookers may quibble about aesthetics, but there’s no argument in that the CR-V delivers nearly 12 percent more horsepower than the Equinox from a similarly sized turbocharged engine. Plus, there’s a hybrid version that offers even more.

The Takeaway: There are good reasons for the popularity of the CR-V. Like matching up five numbers in the lottery, Honda has found a winning combination of performance, comfort, style, safety and dependability.

Which safety technologies are the most important?

The short answer is all of them, but considering the fast pace at which new safety technologies are emerging, the ones to expect now include forward collision mitigation, a backup camera, and blind-spot alert with rear cross-traffic detection. In the base trim, the Equinox falls a bit short, as does the RAV4, neither having standard blind-spot detection in their entry-level model.

Does the Equinox get better mileage on the highway than its competitors?

No. Although its small turbocharged engine does an admirable job, earning a 31 mpg highway rating, it is no match for what the hybrid models achieve. Even the RAV4 with its larger conventionally powered engine does a bit better.

Does the Equinox have enough cargo space?

Certainly for a family of five. It might get a little crowded if everyone is on board, but if you’re traveling alone, there’s plenty of room with the rear seat down.

Has the styling changed on the latest Equinox model?

Yes. For the 2022 model year, the Equinox has refreshed its looks with a new grille design, new front and rear fascias, and new headlamps. LS and LT models also get fresh interior trims, and a new sportier-looking RS model joins the lineup.