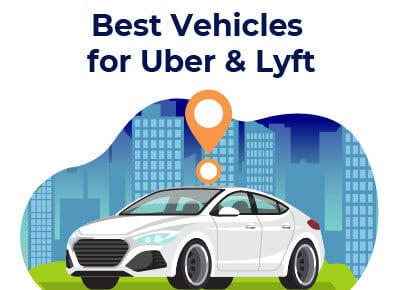 Rideshare drivers need a dependable, affordable, fuel-efficient vehicle that maximizes their income per mile and per day.

While our staff includes multiple vehicle experts, we are not the top experts with regard to rideshare. So we reached out to Jesse Rudavsky*, a full-time rideshare driver since late 2014.

Here is our list of the best Uber/Lyft vehicles based on our in-depth interview with Jesse Rudavsky, a seasoned rideshare provider professional.

Get More Out of Your Car: Check out our post on the best food delivery service to drive for >>

Jesse has been involved in the rideshare business as long as anyone in America and has logged incredible numbers of miles. Including over 1 million miles in Prius cars, his go-to choice for a rideshare workhorse. However, Jesse isn’t shackled to that one brand or model. He has owned and operated a Nissan Altima Hybrid and even Honda Civic Hybrid with a stick shift in his rideshare business.

“The first thing to know is that your rideshare vehicle needs to be a few years old,” said Jesse in our interview. “The depreciation of a new car alone can kill your earnings.” In some years, Jesse logs 50,000 to 70,000 miles driving. “Even large repairs to used vehicles are more sensible than a $3k to $5k new vehicle depreciation rate,” Jesse points out.

Jesse also says that going larger than a compact car does not bring back more revenue. “The few fares you will pass up by not having a larger vehicle are not worth the added operating cost,” he told us. The Uber Black fleet needs to actually be a black-on-black vehicle and be equipped with a livery registration to qualify, so we will leave those specialty vehicles off this list.

After Jesse gave us his picks for the best Uber/Lyft rideshare vehicles, we challenged him to tell us which models he would pick if he could only choose from new models. After some deliberation, he told us that his picks remain the same, with the one exception of adding in the Toyota Corolla Hybrid and Nissan Leaf Plus. 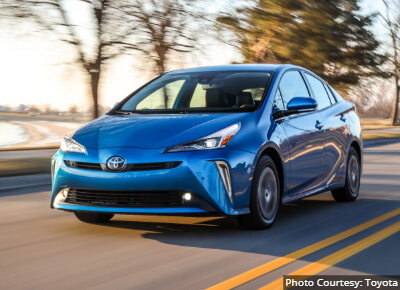 The Toyota Prius earns a perfect 5/5 score reliability score from Consumer Reports from 2009 all the way through 2021. Pair the best possible reliability with one of the lowest per-mile energy costs of any vehicle sold in America, and the Prius is an easy pick as the best rideshare vehicle.

The Prius also has surprisingly large cargo space. With its rear seats in place, its 27.4 cu ft of cargo volume is nearly double that of some small sedans. Drop the rear seats, and the cargo volume leaps to over 50 cu ft.

In traffic, the Prius uses no gasoline when stopped and can even operate without gasoline for short stretches in city traffic.  Add in an IIHS Top Safety Pick Plus Rating for the 2017 model year, and it’s hard to see any way the Prius isn’t the top of its class for rideshare drivers/operators. 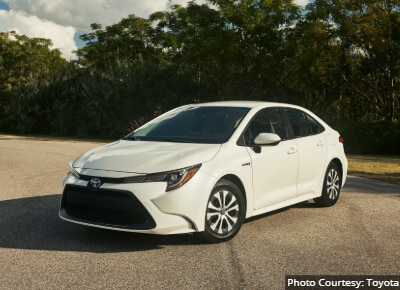 The Toyota Corolla Hybrid offers drivers who want a more conventional-looking vehicle at an affordable price.

The Corolla Hybrid has the same 52 MPG rating that the Prius offers and is a top safety pick for 2021.

With vehicles in short supply, Jesse says that if one is shopping now, the Corolla gives a buyer a second option at Toyota’s dealer lot. 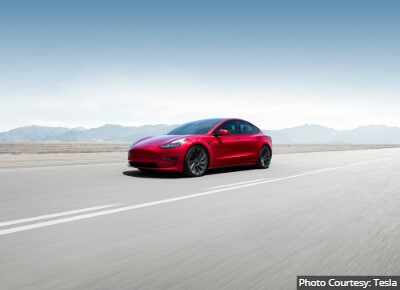 While rideshare use trends urban, Jesse tells us that he often has out-of-town hires. Those rideshare drivers that want a fun-to-drive, fast, and affordable electric vehicle have but one choice, the Tesla Model 3.

The Model 3 has been on the market for many years now and is available in the used market. “I love the idea of having the Supercharger network available to me in addition to any public charger,” says Jesse.

With a total range surpassing 300 miles for some trims, and a very fast charge rate, the Model 3 SR+ is the slam-dunk BEV for rideshare operators. 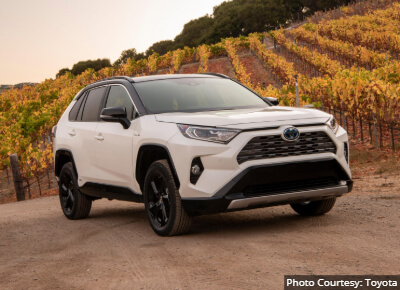 Since rideshare operators use their personal vehicles in their business, having a vehicle that works for the rest of your family’s needs can make sense.

The RAV4 Hybrid offers a 40 mpg fuel economy rating and many of the same benefits the Prius offers, but with more space and standard all-wheel drive.

The best news is that Toyota has been building hybrid RAV4s for many years in high volumes. Now heading into its sixth model year, RAV4 Hybrids at all price ranges are available. 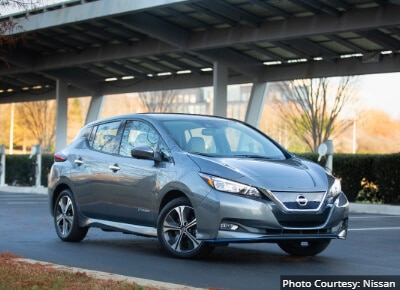 Not everyone can afford the up-front costs of a Tesla Model 3. We asked Jesse which battery-electric vehicle he might add to this list, and he immediately replied, “Nissan Leaf Plus.”

While finding a used one might be tricky, the Leaf Plus is available now for under $30K when federal and state EV incentives are factored in.

“The Leaf plus would be my choice if I were operating primarily inside a downtown area part-time,” Jesse told us. It has the range and the low cost of ownership to do the job, and its purchase price can be half that of a Model 3.

*In addition to being one of America’s earliest ride-share drivers/operators, Jesse Rudavsky is the President of the New England Electric Auto Association. His home base is in Metro Boston. We’d like to extend our thanks for his insight. Prior to being a rideshare driver, Jesse held a CDL and drove tractor trailers for ten years.

Which is the most common rideshare car?

According to Cheatsheet.com, the Toyota Prius is the most common rideshare vehicle in use. It is also first on our list of best rideshare cars.

What kind of car makes the most money with Uber/Lyft?

Experienced rideshare drivers/operators find that used vehicles with low energy costs per mile and a reputation for reliability help them earn the most money at their jobs. Hybrids and electric vehicles are the usual choices for the pros.

Is a Toyota Prius Prime a good Uber car?

Although the Prius Prime is a solid choice for energy efficiency, Uber requires that its drivers employ vehicles with five seatbelts. The Prius Prime only gained a third rear seat back in 2020.

What is the best vehicle for Uber/Lyft in the city?

The Nissan Leaf is a great choice if you’re primarily operating in a downtown area. It has the range and low cost of ownership to do the job.