Can a Bad Body Control Module (BCM) Cause a Car Not To Start? 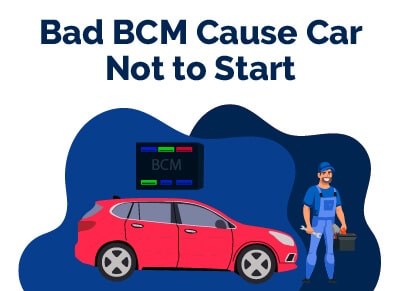 Body Control Modules (BCMs) are powerful control modules that monitor and control the performance of many units and subsystems in your vehicle. This ranges from security and safety systems, ACs, power mirrors and windows, door locks, and even your keyless entry system.

A bad BCM would cause a failure in all these systems. However, the extent of the problem is determined by the damage to the BCM. The big question is: can a bad BCM cause a car not to start?

Let’s learn more about ways a bad BCM can cause your car not to start!

Can a bad BCM cause a car not to start?

As I mentioned earlier, a bad BCM can cause a car not to start. The BCM feeds inputs and interprets outputs from sensors and systems to determine, regulate and monitor the performance of various functions in your car.

When the BCM goes bad, many features in your car will stop working, and if “starting the car” is among the affected components, your car won’t start.

When the BCM is bad and it affects the performance of your remote keyless system, your car will not start. This can also happen if the BCM fails to identify your key’s transponder chip or fails to deliver a start signal to the ignition system.

A bad BCM can affect your battery’s drainage and place a bigger load on the alternator. This might not prevent the car from starting, but damage to the sensors, corrosion, and wire shorting can cause your car not to start.

What problems can a bad BCM cause?

From your car’s inability to start to turning your dashboard into a Christmas tree, a bad BCM can cause many problems in your vehicle.

Here are the 8 most common problems that a bad BCM can cause.

You can tell your BCM is bad by looking out for some bad BCM symptoms.

Does the BCM control the fuel pump?

However, the BCM can control and oversee the performance of other auxiliary units and advanced components that may affect the fuel pump. This may include the gauge cluster. The role of a BCM is limited to electrical accessories in a car and other components that revolve around it.

What systems does the BCM control?

Most of these systems revolve around the electrical system and digital and analog signals.

Can I swap BCM and ECU from a different car?

It depends. Swapping a BCM and ECU from a different car is not a “plug-and-play” activity. You must be sure that the BCM and ECU from the different vehicles align with the car you are swapping. Most car manufacturers personalize their BCM and ECU and lock their function to individual cars.

Most times, the password of the other car is stored on the modules. Until these systems “agree” and “align” with the new engine, it won’t run. You might need to reprogram the BCM and ECU from the other car for a successful swap.

A bad BCM can cause your car not to start and trigger problems in your car. You must understand that not all instances of your car not starting relate to a bad BCM.

You might need to hire a professional to help you with diagnostics and repairs.

Are ECU and BCM the same thing?

No. The engine control unit (ECU) and the body control module (BCM) are not the same. The BCM is a type of ECU, but different types of ECUs aid your car’s total operation.

Can you drive a car with a bad BCM?

Yes. There are chances that you can drive with a bad BCM if it allows your car to start. However, this is a dangerous stunt to pull. Do not do this.

Does disconnecting the battery reset BCM?

How much does it cost to replace BCM?

Yes. BCMs are interchangeable. You can exchange a body control module from any car with yours. You might need to reprogram and reset the BCM to connect with your sensors and units to work properly in your car.