Window Tint Laws by State (Everything You Need to Know) 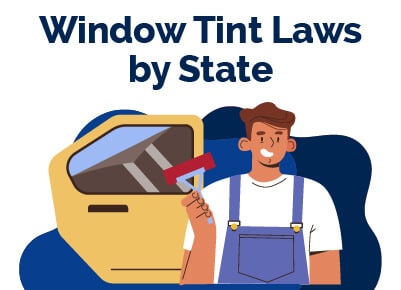 We've all grown used to window tint. It's one of the most popular car upgrades today. Modern cars have a special polyester material that can block ultraviolet rays. This window tint is meant to protect passengers from harmful rays.

Many car owners install window tints to protect their vehicles from the sun and other harmful rays. It can also help enhance their looks and provide them with more privacy.

Dark grey and black are some of the most popular colors people use today, and if you want to add a darker tint to your vehicle, check the laws in your state.

Film on your windows can add a certain amount of value to your car and reduce the glare you get from the sun.

It can also help protect your vehicle's interior from the harmful effects of UV rays. This article covers the various window tint laws by state.

If someone cannot be seen by others while inside their vehicle, their car's tint may be too dark. Other states may specify what parts of vehicles' tint should be considered.

They include the following:

In Michigan, people are allowed to tint their windows to any percentage. Seven other states only allow lighter tint on car windows.

Three other states, including New Hampshire, New Jersey, and Vermont, do not allow tint on cars.

Some states also have laws that allow people to tint their windows to a certain percentage.

The tint on a person's windows can vary depending on their state. Some states are stricter regarding tint regulations, while others are more lenient.

In some states, people can tint their windows to various colors. This is because they're more lenient on regulating the tint. The lenient states include the following:

However, some states have strict regulations regarding regulating the tint on cars. They only allow lighter colors on car windows. Some of the states that have this law include:

One of the main reasons why people are allowed to tint their cars' windows is due to certain medical conditions. These conditions can allow individuals to tint their windows to improve their visibility.

To legally tint your vehicle, you must have a doctor's note. Some states have special medical reasons for allowing people to tint their cars. For instance, some conditions and illnesses make people sensitive to light.

Unfortunately, despite severe medical conditions preventing people from being exposed to light, many states still prohibit car window tint. They include:

Although some states don't allow people to tint their windows for medical reasons, some still have laws enabling people to set their tint to a certain percentage. They include:

Why Is Window Tint Illegal in Some States?

In some states, window tint is prohibited for security and safety reasons. It can restrict the amount of light entering a car, making it hard to see the road.

In addition, it can lead to increased accidents since people tend to drive with limited vision. Another reason it's illegal to tint is that it can interfere with the investigations of police.

Can One Get Pulled Over for Having Tinted Windows?

Sometimes, it's possible to get pulled over for having window tint. In some states, it's legal to tint. Doing so along the lines of the laws in place allows you to avoid getting pulled over.

However, in other states, it's not allowed. This means that if you're in a state where the tint is illegal, you might get pulled over.

Understanding the laws of that state is very important to avoid getting pulled over.

The laws regarding window tint vary depending on the state where you live.

For instance, the Department of Motor Vehicles allows only 70% of visible light through the front passenger window in California. This means that limo tint is not permitted.

It's no surprise that state governments make it incredibly complicated to regulate automotive window tint.

Not known for their simplicity or logic, each state has its own set of rules designed to make applying these chemicals a bit more complex.

This can be a problem for people who buy vehicles outside their home state or who relocate to different parts of the country.

Fortunately, a few states have laws that specifically address the issue of automotive window tint. However, there are still many points to remember when tinting your vehicle.

The visible light transmission measurement known as VLT% is used to determine the level of light that's allowed to pass through an automobile's window.

This is the percentage of visible light allowed to enter a vehicle through the film or the glass.

The tint level allowed on the front passenger and driver's windows is VLT%. This is typically higher than the value for the rear window, as it will enable the driver to be more visible from the outside.

The amount of tint allowed on your vehicle's rear window is typically the same as for the rear side windows. However, in some states, this level of protection is more restricted.

Although you can't tint the windshield in all states, some states allow you to add stickers to the top surface of the windshield. These can be placed in the area where the sun shield is located.

There are many factors to consider when choosing automotive window tint. While it's a great way to enhance the appearance of your vehicle, it's also important to keep in mind that various rules need to be followed.

Although we like the look of dark tint, we want to ensure that you are aware of the risks. Drivers and pedestrians need to be able to see each other properly. If you don't care about the tint, then install it.

There's also a law that requires law enforcers to be able to identify the driver in a vehicle. Although we do not have the authority to enforce these rules, you must have all the necessary information.

Through our research, we have created helpful guides that help you understand each state's various regulations and laws.

Most state window tint laws are straightforward, but some terms can be used by licensing agencies and law enforcers that are only sometimes clear.

For instance, "non-reflective" and "non-excessive" are not always clear and can be used by different people. If unsure about the terms, use your best judgment and avoid getting into a legal dispute.

One of the most important factors to remember when choosing a custom window tint is that the vehicle's light transmission block can affect up to 80% of the tint. This should be considered when you're adding it to your car.