A Subaru vs. Toyota Reliability Guide 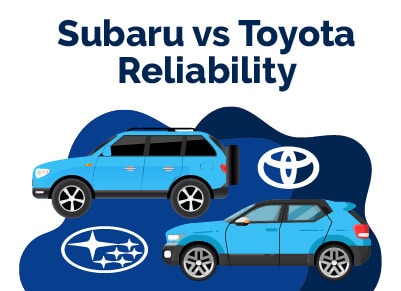 Subarus is one of the most reliable cars on the market. With accurate steering, balance, and stability, superb ergonomics and designs, an excellent brake system, and their unique AWD system and Boxer engines, Subarus have many reasons to earn users’ trust on reliability standards.

But is Subaru more reliable than Toyota? Toyota has maintained an impressive level of reliability that makes it look like they are the premium standard for all car brands. Sadly, no matter how much we love Subarus, the truth is that Toyota is more reliable than Subaru.

Here's all you need to know about Subaru and Toyota's reliability and why Toyota is doing better than them.

Subaru vs. Toyota Reliability: Which is better?

Of course, Toyota is more reliable than Subaru. Toyota edges above Subaru in producing cars that are great for long-term use.

Toyota has a reliability rating of 4.0 out of 5.0, ranking 8th out of 32 car brands, with an average annual repair and maintenance cost of $441.

This impressive score is better than Subaru’s 3.5 out of 5.0 reliability rating, ranking 14th out of 32 car brands, with an average annual repair and maintenance cost of $617.

Although both car brands have a 0.3 average chance of visiting the mechanic shop, Subaru has a 13% probability of severe damage, which is higher than Toyota’s 12% severe damage.

The reliability metrics for Toyota and Subaru differ across the different features that they share. Toyota offers a more reliable engine than Subaru, durable frames, impressive longevity, better gas mileage, and safety ratings. However, there are areas that Subaru tends to do better.

Subaru offers a great AWD design, but Toyota employs a hybrid system to try out systems that work. Subaru’s AWD system makes it a great choice for off-road driving, best on ice and snow.

Subaru is so good at off-roading driving and snow because the AWD system delivers power to all wheels, sustaining maximum traction, stability, and acceleration, making it easier for the cars to handle tough terrains and slippery grounds.

The comparisons of Toyota vs. Subaru Reliability and which is better depends on your driving needs and conditions.

Choose Subaru if you need a solid car that can handle snow and winter rides. But if you need a car that handles all seasons and has low maintenance and longevity, go for Toyota.

The designs of Subaru and Toyota vary according to the models they present. However, Toyota offers a more reliable design because of its versatile option.

All Subaru cars except the Subaru BRZ model use the standard AWD system. The impressive traction provision of the AWD system looks like a win for Subaru, but limiting all its cars to a uniform drive system is a setback.

Subaru offers the benefits of stability, efficiency, and quicker response in slipper situations, eliminating the possibility of hydroplaning.

But Toyota looks at the bigger picture by providing models in AWD, 4WD, FWD, and 2WD systems. Allowing drivers to choose models that match their needs.

Subaru is doing a great job with its eyesight driver assist technology. The technology has earned Subaru the highest safety ratings on IIHS for front crash prevention.

The integration of dual-color cameras and intelligent systems that offer extra awareness, safety, and peace of mind gives Subaru an edge in the technology race against Toyota.

However, Toyota is not left behind in these updates. The Toyota technology package (Toyota Safety Sense) covers Subaru’s safety and technology features.

Due to Toyota’s interest in versatility, they have cars with high safety ratings in all categories. Unfortunately, Subaru has none in the minivan and large cars category.

The gas Mileage Comparison of Subaru and Toyota varies according to their models. However, comparing the base fuel economy ratings of Toyota and Subaru cars, we noticed that Toyota does better. The Toyota Corolla achieves improved gas mileage than Subaru Impreza.

Subaru cars last up to 200,000 miles with an average lifespan of 10 to 13 years of extensive use. This largely depends on your maintenance habits, as many Subaru cars do not last this long.

A Toyota car can easily last up to 250,000 miles. This is because you will spend less maintaining a Toyota car in the long term than you will do with a Subaru.

However, this engine has a few lapses: high maintenance cost and size. In the end, Toyota engines last longer than Subaru.

We’ve helped you understand that Toyota cars are more reliable than Subaru. This doesn’t mean that Subaru cars are unreliable. Your decision should cut through your needs and budget.

Toyota and Subaru have amazing resale value, safety, and technology systems. You will find varying costs for the different models of these car brands. You can choose between an AWD car with amazing traction or a versatile car with fuel efficiency and longevity benefits.

Which lasts longer, Subaru or Toyota?

Are Subarus more expensive to repair than Toyota?

Yes. Subarus are more expensive to repair than Toyotas. The cost of repairing a Subaru is $617, while that of a Toyota is $441. This is costlier than what it takes to repair a Toyota.