Are RAMs Expensive to Maintain? 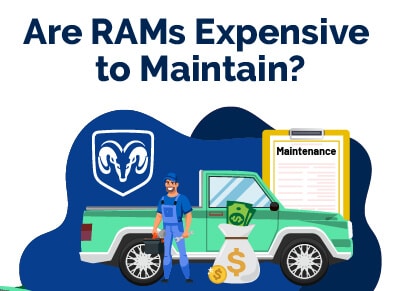 According to a study by J.D. Power, Ram is the best-performing vehicle in its class regarding initial quality. However, some common issues prevent them from being reliable.

The division of Fiat Chrysler Automobiles Group that makes Ram trucks is focused on providing the best possible vehicle for the commercial vehicle market.

Despite the various brands that offer similar products, Ram still holds the top spot regarding reliability.

Although it's widely believed that a Ram truck will have a long lifespan, it doesn't mean that every model will be reliable. There are some models you should avoid and some that you should look for. But are RAMs expensive to maintain?

We will find out shortly in this article!

Are RAMs Expensive to Maintain?

The average cost of regular maintenance for a Ram truck is around $858. However, this figure can vary depending on the model you own.

Compared to other vehicles, RAMs are more prone to experiencing issues and are more expensive to maintain.

Regular maintenance is required to keep your vehicle running smoothly. Certain models will cost more than others. For instance, a Ram 3500 truck will cost you more than a 1500 truck.

It would be best if you also understood that the name Ram and Dodge are no longer the same. In 2010, the company introduced different models under different brands.

The reliability of Ram vehicles is typically mediocre. Compared to other brands, they require more maintenance.

RepairPal claims that about 0.3 times a year, Ram owners go to the repair shop for unscheduled maintenance. The average rate for severe repairs is 15%, which is higher than the national average.

Toyotas are less likely to get severe repairs than Ford. Ford has the same frequency of tough repairs, while Toyotas only have a 12% probability of having issues.

You probably bought a Ram truck because it's something you need for your family or safety. You may also like big trucks for carrying heavy loads or towing.

Regardless, you probably didn't anticipate the high maintenance costs you'll have to pay in the first few years after you bought a Ram truck.

The cost of ownership for a new Ram 1500 will be around $17,677 for the first ten years. This is almost $9,000 higher than the average cost of a similar vehicle from other brands.

In addition, there is a 54.8% chance that you will need a major repair on your car. A major repair is typically something that costs over $500.

If you own a Ram 2500, you're probably paying a lot of money to keep your vehicle running smoothly.

In the first decade, this vehicle's average cost of repairs and maintenance is $25,464, which is almost $12,000 higher than the average for other vehicles in this segment. Also, there is a 79.19% chance that you'll need a major repair within that period.

CarEdge estimated that the average owner of a Ram 3500 pickup truck spends around $25,844 on service and maintenance costs during the first decade of their vehicle's ownership.

The average cost of maintenance and repairs for a Ram 3500 is significantly higher than that of a heavy-duty pickup truck.

It's not surprising that the cost of repairs and maintenance for Ram trucks will increase yearly.

These models start out relatively small, with a 5.65% chance that you'll need to repair during the first year and an 8.17% likelihood for the Ram 3500.

Despite the high maintenance costs of the Ram 3500, you should be bold in keeping it.

If you're still planning on keeping the vehicle, make sure you set aside a small amount each month for repairs and maintenance.

This will allow you to avoid unexpected expenses and maintain your car running smoothly.

Before 2011, Dodge Ram trucks received low rankings in terms of reliability. However, since 2012, the company's vehicles have improved and ranked at the top of their class.

They're often compared to the Ford F-150, the other major vehicle manufacturer's flagship model.

The F-150 is usually the winner, but the RAM is close enough in terms of reliability that it often comes in second.

If you're looking for a light-duty or heavy-duty pickup truck, the Dodge Ram is a great choice.

Besides being reliable, the company's vehicles also have various features that make them stand out from their competitors.

Aside from being reliable, the Dodge Ram is also highly regarded by consumers due to its various features.

These include its powerful engine, comfortable interior, and user-friendly navigation system.

The Dodge Ram 1500 is a great choice if you're looking for a heavy-duty or light-duty pickup truck.

The vehicle can be customized to meet your needs with various engine, trim, and package options.

Some consumers may feel that the car needs to have the towing capacity of its competitors, such as the Chevy Silverado or Ford F-150.

Some consumers praise the RAMs for being capable, ergonomic, and luxurious.

Although the fuel economy could be better, the most basic package of RAMs doesn't provide you with the most luxurious feel.

However, the higher-end models have leather seats comparable to those in luxury cars. The gear shifter is also a small rotary dial that can be found underneath the steering wheel.

It's no wonder the RAMs are known to be capable and ergonomic. The 2021 Dodge 1500 features extensive controls that allow drivers to easily access them even while wearing gloves.

Since trucks are typically used by construction workers, it's only natural that the company would make these features for farm workers.

The Cost of RAM Spare Parts and Services

The battery is usually used to start your truck when the engines are running. It also powers various electronic components and recharges the truck's battery. However, the alternator will keep your vehicle running while you're driving or idle.

An oil change can cost you around $125 to $133, depending on the component and labor involved, though this doesn't include fees and taxes.

It's important to keep in mind that this service is only one component of your vehicle's overall maintenance.

The oil change intervals for most vehicles should be about 10,000 miles. They should also stay within 350 hours.

Those who want to install their own Wiper blades for their Ram 1500 can be picked up for around $40.

However, if you're planning on hiring a professional to fit them, you might be charged around $100 for the parts and labor.

Getting your own Wiper blades is a relatively simple and inexpensive fix you can easily do yourself. You can also find plenty of YouTube tutorials on how to install them.

RepairPal claims that replacing the air filter for a Ram 1500 can cost you around $68 to $79, not including fees and taxes. This is a relatively simple and inexpensive fix that should be performed annually.

After opening the hood, locate and remove the old air filter housing. Then, replace the housing cover with the new one.

RepairPal also claims that replacing the battery for a Ram 1500 can cost you around $200, not including taxes and fees.

Although there is no specific mileage recommendation for a vehicle's battery, it's important to note that it can eventually die.

The life of a battery can vary depending on various factors such as its climate and driving habits.