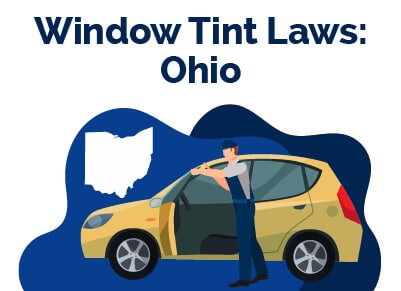 In 2004, car window tint laws were enacted in Ohio. Some additional rules and regulations apply to it.

We have listed all the details about car window tints in the state, including the type of intent that's allowed and how it can be dark or reflective.

In 2022, getting pulled over by the police for not following the Ohio tint laws is not worth it. Violation of the law, a minor offense, can result in a fine of up to $100.

The article covers Ohio window tint laws. The law enforcers in Ohio use visible light transmission (also known as VLT) to refer to the Tint on car windows.

The state's window tint law allows up to 50 percent VLT on the driver's and passenger's windows and 70 percent on the windshield.

Visible light transmission is the percentage of light that's allowed to pass through a car's windows through a window tint.

In each state, there are specific limitations on the amount of light that can pass through a car's windows through VLT.

The laws in Ohio vary depending on the type of window tint and how much light can be absorbed by the windows. For instance, the law on front window tint will differ from that on back windows.

Although car window tint can reduce heat and glare by reflecting incoming light, you must be within limits to benefit from its effectiveness.

For instance, the percentage of reflectivity on the rear and front windows should stay the same.

What Is the Darkest Legal Tint?

Different states have laws prohibiting the use of TintTint that don't meet this standard. In Ohio, the window tint laws are not as stringent as those in other states.

For instance, the law in the state allows only 50 percent VLT on the front side windows. However, some states allow a free range for rear and backside windows.

In the United States, Iowa and New York are two states that have the strictest window tint laws.

In contrast to Ohio, states like Florida have lower car window tint requirements.

In the state, drivers must have at least 28 percent of VLT on the front windows and 15 percent on the rear and back windows.

The Importance of Tint Laws

In addition to providing law enforcement officers with a clear view of who's inside a vehicle, window tint laws also help protect the safety of the officers.

In Ohio, law enforcers use a meter to measure and determine the level of light transmission allowed through a car's windows.

They also require vehicles to have stickers that identify the level of window tint.

Most car owners choose to install window tint due to the safety and looks it provides.

Darker windows are also more appealing to some drivers as they help prevent potential thieves from looking inside their vehicles.

In the event of a car crash, properly installed window tints can help protect the occupants and prevent them from getting scratched or broken.

In Ohio, there are a few things that you should consider before you decide to tint your windows.

Before you start the process of installing window tint, make sure that you thoroughly check the state's laws.

The State of Ohio does not allow medical exemptions for people who want to tint their windows to provide a more natural and darker tint.

In Ohio, it's not allowed to tint a car's windows if the light transmittance value is less than 50%. And there are no medical exemptions to this law.

This type of window tint with a layer of glue and dye inside it can enhance the appearance of a car. It can also help people lower their expenses. It is relatively inexpensive to procure.

It can also endure various activities. If you are looking for an incredibly resilient window tint, this is the choice for you.

The particles used for the metalized window tint are made up of metallic elements, which makes it incredibly dense.

This type of Tint is ideal for people who want to avoid the appearance of discoloration and fading.

How to Remove Window Tint from Cars

To remove the Tint, roll the window down slightly and make sure that the top surface is visible.

Using a steamer two inches away, steam the outer surface of the window to get rid of the adhesive.

Doing this will help speed up the dissolution process of the adhesive.

After steaming the window, carefully lift it using a sharp object to remove the corners. If there are no easy edges, additional steam should be applied to loosen the adhesive residue.

Using your hands, carefully remove the outer surface of the window tint. Continue steaming the Tint in areas that are still sticky.

Using Ammonia or Soap and Water

To protect your vehicle's interior from the effects of ammonia, you can use plastic sheets or garbage bags.

Make sure that the bags fit the windows by cutting them into pieces. You can also use soap and water to help the bags stick.

Make sure that the windows are completely covered in ammonia. Using the garbage bags, cover the windows for about an hour.

Sharp objects are used to remove the window tint carefully. After carefully lifting the outer surface of the film, use the blade to get the stuck parts.

Although a hair dryer is an effective tool for removing the window tint's adhesive residue, it can take patience to get the job done. Roll it down slightly to ensure that the car's window's top surface is visible.

To get the most out of the hair dryer, run it over one of the corners of the window tint to remove the adhesive.

As you peel the window tint, run the hair dryer over it to get the most out of the adhesive. Doing so will allow you to remove the film easily.

Non-reflective car window tint can cost around $100 to $400, though the price can go much higher for better quality films, such as ceramic or special ones.

The cost of car window tint can vary depending on the type of film used. The quality of these films has improved due to advancements in technology.

The price of car window tint can also vary depending on the film's heat rejection.

Other factors, such as the size of windows and the number, are additionally taken into account to come up with an estimate.

One of the best types of car window tints is ceramic film. Unlike other types of films, this one does not contain dye or metal. It also doesn't obstruct radio and GPS signals.

When choosing car window tint, you should consider its safety, as well as the interior temperature.

This type of film can help prevent your vehicle from getting damaged or even getting involved in an accident.

Another advantage of ceramic film is it can block the sun's heat, which makes it one of the top car window tint products recommended by some.