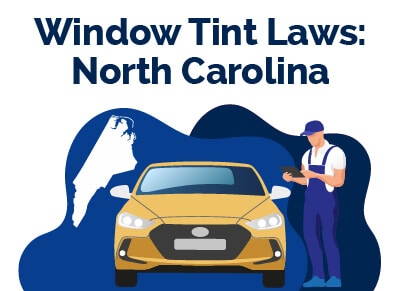 Although there are many benefits to using window tints, it is essential to understand the state's tint laws to avoid breaking them.

Today, we will talk about the various details of the law, such as how reflective or dark window tint can be and who needs a car window film permit.

In North Carolina, Visible Light Transmission (VLT) determines the percentage of light that can pass through a vehicle's window. The laws for different vehicle types and window locations vary.

This article covers all you need to know about North Carolina Tint Laws and more!

In North Carolina, the VLT is the primary concern of the law when it comes to regulating the amount of light that can be reflected and blocked by a vehicle's window tint.

The percentage refers to the amount of light passing through a vehicle's window. The darker the tint, the less light it can allow to enter the vehicle.

The laws regarding window tint are regularly updated based on the percentage of light that can pass through a vehicle's window.

The current laws in North Carolina were first established in 2001. They specify how reflective or dark window tint can be.

These laws are for passenger vehicles such as coupes, sedans, station wagons, hatchbacks, and cars.

These laws are for multi-purpose vehicles, such as trucks, SUVs, minivans, and pick-up trucks.

Front side windows: 32% VLT is permitted

Back side windows: Any tint darkness is permitted

Windshield: The maximum length of window tint installed on a vehicle's windshield is 5 inches below the top of the AS-1 line.

Other Restrictions: colors such as yellow, red, and amber are not permitted. And there must be dual side mirrors for the back tinted windows.

Tail Lights: In North Carolina, tail lights cannot be covered with tint. They must maintain their original clear or red shade.

Headlights: Same as tail lights, drivers are prohibited from tinting their headlights.

License Plate Cover: It is illegal to tint license plates in North Carolina.

In North Carolina, law enforcers are very strict about their stance when it comes to regulating the tint on vehicles.

If they pull over a car for having an illegal level of darkness, they can issue a fine of $50 plus court costs which adds up to $238.

This exemption will enable them to tint their windows with darker tint after applying for a medical exemption permit.

Through the North Carolina Department of Motor Vehicles' Medical Review Program, individuals can get a medical exemption permit for up to five years.

They must remain in their cars and have unique stickers on their windows to prove their exemption.

In addition to these laws, other regulations apply to the tint on cars in North Carolina. Before you tint your windows, ensure you understand the regulations to avoid problems later on.

In addition to these laws, other regulations apply to the tint on cars in North Carolina. One of these is the requirement for dual-side mirrors for vehicles with this accessory.

Darker tints can help them avoid the Sun's glare at night or in areas with limited sunlight. Before you start the process of applying for a medical exemption, make sure that you thoroughly understand the regulations.

An exception permit is a type of exemption that allows you to tint your windows without breaking the law.

It does not mean that you can use it on other cars. In addition, you are not allowed to carry this permit while driving other cars on the road with a license plate with a Virginia registration.

The Department of Motor Vehicles also provides an exception sticker that will be displayed on the vehicle's rear window. Violation of these conditions could result in a $200 fine.

If you're after a window tint that's resilient, this is the choice. The hybrid film comprises dyed or metalized tint and can effectively block ultraviolet rays and heat.

This type of window tint is also solid and can endure various activities.

A layer of glue and dye inside a film can help enhance the appearance of your vehicle. This type of window tint can also help people lower their expenses.

Metalized window tint is made of metallic particles, which makes it incredibly dense. This tint is great for people who want to avoid discoloration and fading.

The non-reflective film costs around $100 to $400 for a standard car window tint. However, the price can go much higher for better-quality films.

Depending on the type of film used, car window tints can vary in cost. The quality of these films has improved due to advancements in technology.

The film's ability to reject heat affects the price of car window tint. Other factors, such as the number of windows and the size of the window, are additionally taken into account to come up with an estimate.

Ceramic films cost more than dye films due to their high quality. This is because of the technology utilized in these films.

Compared to dye films, ceramic films have a longer lifespan. But, dye films deteriorate faster, which can lead to discoloration.

The highest-quality type of car window tint is ceramic film. Unlike other films, this one doesn't contain dye or metal. It also doesn't block radio signals and GPS devices.

The price of car window tint can also be justified by the latest technology used to make it. For instance, hybrid film, a hybrid version of ceramic film, has various advantages. These include its heat rejection and durability.

When choosing car window tint, you should consider its safety. This type of film can help prevent your vehicle from getting damaged and getting involved in an accident.

Another advantage of ceramic film is its ability to block the heat coming from the Sun. This makes this type of film one of the top recommended products.

How to Remove Window Tint from Cars

Although a hair dryer can help loosen the film's adhesive, it takes patience to get the job done. Roll it down a little to ensure that the car's window's top surface is visible.

Using a hairdryer will allow the glue to melt. You can also use a razor to remove the outer edge of the film.

Run the hair dryer over the film to allow the glue to melt as you peel the film. Doing so will allow you to remove the film easily.

Make sure that the top surface of your car's window tint is visible by rolling it down a couple of inches.

Using a steamer two inches away, steam the outer surface of the window to get rid of the adhesive. Doing this will help speed up the process of removing the film.

Repeat this process on the inside surface of the window. Lift the corners using a sharp object if the edges come off slowly. To loosen the adhesive, apply more steam.

Using your hands, carefully peel the outer surface of the car window tint off. Continue to apply steam to the area where the film is most sticky.

Using Ammonia or Soap and Water

To protect your vehicle's interior from the effects of ammonia, you can use plastic sheets or garbage bags to pad them.

To make sure that the bags fit, cut them into pieces. You can also use soap and water on the windows to help the bags stick.

Carefully remove the car window tint using a sharp object. If the outer surface of the film gets stuck, use the blade to lift it.