Are Mitsubishis Expensive to Maintain? 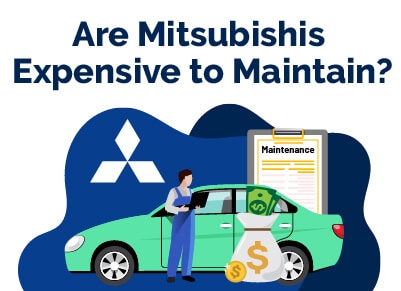 Mitsubishi is a well-known manufacturer of vehicles, such as trucks and SUVs; they once dominated the market until recently when there are plenty of other car brands out there. But are Mitsubishis expensive to maintain?

According to RepairPal, Mitsubishis have average reliability ratings and an annual repair cost of around $555.

The price of a new Mitsubishi car is just the beginning of its expenses over its lifetime. Proper maintenance is also essential to ensure that your vehicle runs smoothly.

Are Mitsubishis Expensive to Maintain?

Factors contributing to the brand's long-term reliability include the number of visits to a repair shop and the likelihood of a repair being severe.

It also has an 18.18% chance that it will need major repairs within that period. This is better by about 2% compared to other cars in the same category.

Compared to European and domestic competitors, Mitsubishi cars are less expensive to maintain. They also have higher ownership costs than their Japanese rivals.

Back in the day, Mitsubishi cars were known for being reliable. They were no different from Japanese brands, known for their long-term dependability.

In 2012, the Mitsubishi Lancer was named the most dependable vehicle in the UK by Warranty Direct.

However, over the past couple of years, Mitsubishi cars have started falling down the list. In 2016, they were named one of the most unreliable brands by Consumer Reports.

They only scored 51 out of 100 points, and the organization refused to recommend a model.

In 2017, Mitsubishi was ranked seventh out of the 10 brands in the JD Power Dependability Survey. They had 182 problems per every hundred vehicles, above the industry average of 156.

If we look at specific models, the reliability index of Warranty Direct ranks Mitsubishi as poor.

Engine trouble was the most common issue, affecting 43.55% of all vehicles, while the braking system was responsible for 20.97%.

The Mitsubishi Shogun was also rated as poor by the organization. It has a Reliability Index of 140, higher than the other models.

Most of the vehicle encounters issues are related to the suspension and the axle.

According to the organization, this makes up 34.29% of all problems, while the engine comes in second with 22.86%. Despite this, the company still scored an average reliability index of 117.

Warranty Direct named the Mitsubishi Lancer the most dependable vehicle in the UK. It had a reliability index of 4. This is considered to be the best score in the organization's history.

How Frequently Does a Mitsubishi Require Maintenance?

We analyzed the frequency of major vehicle maintenance over three years. One of the most common major repairs that a Mitsubishi needs is system breakage, which can be expensive.

Although the data collected for this study is based on a make-model basis, factors such as the vehicle's condition, mileage, and driving habits can also affect the results.

The frequency score of a vehicle can be used to determine how long it can go without major repairs. It shows how often a specific model requires major maintenance per three years.

The score is presented in terms of the number of years; if a vehicle has a frequency score of 3, it requires major repairs every year. The closer the score is to 0, the longer the car can go without major repairs.

The frequency score of a Mitsubishi vehicle is 0.78. This means that it's significantly better than the average vehicle in the market.

There are plenty of reliable cars out there that also require less frequent maintenance.

For instance, some domestic brands typically require higher visits to the shop but at a lower overall cost.

This doesn't mean that the vehicle breaks less often, but it shows that it's effortless to fix if there are issues.

Certain repairs, such as those involving major components of an engine, can be outliers and cost significantly more than the average repair.

To identify these types of repairs, RepairPal uses a severity score to evaluate their reliability.

The severity score is used to determine if a specific vehicle make or model will most likely have a major issue. It can estimate the likelihood that the car will need major repairs.

The NHTSA uses the severity score to enforce the safety standards of vehicles. It's important to note that having a car that needs major repairs can lead to accidents.

For instance, the model with the highest severity score is Mitsubishi. This vehicle has a score of 11%, which is significantly better than the average for all vehicle models.

A vehicle's severity score can also determine if you should consider getting an extended warranty.

Although these types of insurance typically don't make economic sense, they can help avoid costly repairs.

What Are the Common Mitsubishi Problems?

When buying a new car, one must be aware of the problems that may come up later on.

This applies to both new and used vehicles. Here are a few common issues you may encounter with a used Mitsubishi.

Some owners of used Mitsubishi cars have reported that their clear coat has white patches on them.

There are also reports of failing automatic transmissions in the Mitsubishi.

The clutch may also fail prematurely, leading to owners replacing theirs with a higher-market model.

Why You Should Maintain Your Mitsubishi

Maintaining a regular maintenance schedule is also essential for your Mitsubishi, as it can help keep it running at its best and prevent costly issues from happening.

Not maintaining your vehicle can also lead to costly repairs in the future.

Which Mitsubishi Cars Are the Most Reliable?

These two models have minimal problems and rank highly in the reliability index. Unfortunately, you can only get these cars second-hand.

Which Mitsubishi Cars Are the Least Reliable?

However, over the past couple of years, the company has started to slip down the rankings.

Unfortunately, both the Colt nor the Mitsubishi Lancer are not currently being produced, so if you're planning on buying one of these cars, you might have to look for a used one.

They're still capable of driving well and are perfect if you're looking for an off-roader with the latest technology.

A Mitsubishi may be an excellent investment if reliability isn't your primary concern.

Your vehicle's requirements and routine maintenance costs can vary depending on the make and model of your car.

Most car owners' manuals list services that their vehicle requires. A well-defined maintenance schedule can help avoid costly repairs and other unscheduled services.

New vehicles require less maintenance than they did in the past due to the technological advancements that have occurred in the industry.

However, there are still some general expenses that car owners should consider.

Basic maintenance factors include oil changes. Changing the oil on your vehicle's engine every three months or 5,000 to 7,500 miles is recommended.

The vehicle's front two tires are responsible for most weight, so they must be rotated regularly. It's also recommended to rotate the tires on every oil change.

Mitsubishi vs. Honda vs. Peugeot

If we compare the reliability of Honda cars to those of other brands, we can see that they are very reliable.

In the JD Power Vehicle Dependability Survey, Honda came in at a ninth place, with a reported 143 problems per vehicle, which is below the industry average. They also came in second place in the Reliability Index, scoring 42.

Peugeot 4007 and the Mitsubishi Outlander share an engine. Unfortunately, this seems to be reflected in their scores.

However, in the Telegraph's Worst Engine survey, the French brand performed better than Mitsubishi.

In the Reliability Index table, they came in 14th place, which is better than Mitsubishi and the average.