Are Land Rovers Expensive to Maintain? 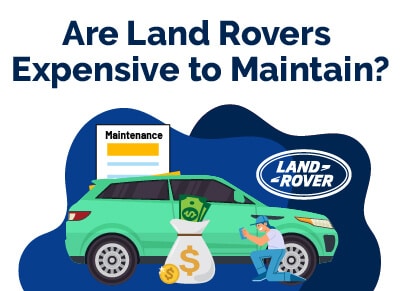 The high-end vehicles known as Land Rovers are popular for their advanced features and technological upgrades. But are Land Rovers expensive to maintain?

These cars can be expensive to maintain. While preventive or regular maintenance can protect you from costly repairs, it is still essential to consider the long-term implications of these issues.

Due to the lackluster reliability ratings of Land Rovers, they are typically more expensive to maintain than luxury SUVs. An annual repair bill of around $1,174 is average for this vehicle.

The sticker price is only the initial step in the long-term cost of ownership of a luxury vehicle. Regular maintenance is also essential to ensure that your Land Rover runs smoothly. It’s also worth noting that some cars cost more yearly than others.

Let’s learn more about Land Rovers and their maintenance cost!

The compact and full-size SUVs from Land Rover are at the bottom of Consumer Reports' list of SUVs. The 2020 models received a predicted reliability rating of 1 out of 5.

This is the lowest rating that the brand has ever received. Also, if you look back over the last decade, no Land Rover models earned a higher reliability rating.

Even though Consumer Reports' reliability ratings of vehicles aren't the most important thing, no other car brands have been in the red this long in terms of the organization's ratings. For every vehicle that has been in the red for a decade.

Are Land Rovers Expensive to Maintain?

Land Rovers are more expensive to maintain than other luxury vehicles. They also need more frequent repairs, and 16% of all Land Rovers' repairs are severe.

According to Repair Pal, it costs around $1,174 annually to fix a Land Rover, and it only received a mediocre 2.5 out of 5 reliability rating.

Including the cost of repairs into the overall price of ownership can make owning a Land Rover much more expensive.

If you're considering getting a Land Rover, you might think you need a better deal.

However, if you recognize the various features of the models, such as their quality, durability, and off-roading abilities, you might not be surprised by how expensive the cars are.

Besides the price, there are other factors to consider when buying a luxury vehicle, such as a Land Rover. They include the following;

Repairpal claims that the Range Rover is a frequent visitor to repair shops and earned a 2 out of 5-star rating due to its reliability.

Due to the poor reliability ratings, the cost of maintaining a Land Rover is higher than other luxury vehicles.

Annual expenses average $1,174, which is significantly higher than some models.

The average cost of maintaining a luxury vehicle is around $1,148, and the Land Rover doesn't seem like it's out of whack.

The frequency of visits to the shops is average, and the severity of repairs is lower than other models, making it a middle-of-the-pack performer.

The depreciation rate is your vehicle's value once it has been in service. The New Range Rover's rate of 64% after five years will give you around 36% of your original purchase price.

Maintaining insurance is required by law to be legal on the road, and luxury vehicles will typically have higher premiums.

According to Insuraviz.com, the cheapest luxury vehicle you can insure is the Acura ZDX at $108 monthly. However, owners still have to consider the additional expense when choosing a new car.

The Land Rover Range Rover Evoque came in at 12th place out of all the cars on the list, and it has a cost of around $1600 ($133 monthly). It's average among SUVs, but it's significantly behind the leader.

Your insurance rates may vary depending on where you live and how you drive.

While you might not think that safety has anything to do with costs, it's important to remember that there are over 40,000 people who die each year in the US in car crashes. Proper insurance coverage is essential to protect your family on the road.

The NHTSA does not have ratings for the Land Rover models. The IIHS and Consumer Reports have not tested the vehicle either.

Despite the lack of testing, the Land Rover doesn't seem to have safety concerns.

Other safety features include blind-spot detection, cross-traffic alert, and rear backup sensors. There is also an abundance of airbags for both the back and front rows.

At What Mileage Do Land Rovers Begin to Have Problems?

New Land Rover models come with a limited warranty that covers the vehicle for up to 80,000 kilometers.

This means that the company is sure that your car will be in excellent mechanical condition during that time.

However, some sources claim that some of the problems they experienced during the warranty period were related to transmissions.

Before you buy a new car, you must have a good service history. Testers and owners of Land Rovers encounter common issues: leaking radiators, air suspension issues, and timing chain problems.

Having a record of all the repairs done to the vehicle will allow you to identify potential problems and make an informed decision.

If your vehicle has not had major repairs, it will likely need work soon. You can expect that the problems will start happening after 150,000 kilometers.

How Much Does It Cost to Repair Common Land Rover Issues?

Despite being incredibly versatile, the Land Rovers are prone to experiencing issues.

These are typically caused by various factors and can vary depending on the model and year of the vehicle.

In addition, specific models such as the Land Rover Discovery 3 and 4 have issues with electronic park brake systems and air suspension.

One of the most common reasons for air suspension failure is the leaking air springs. This issue can cause a rough ride and make driving unsafe and uncomfortable.

To fix this issue, you'll need to have a variety of Land Rover Discovery components.

These include the suspension compressors, the housing, and the entire unit. They cost between $250 to $500.

You must get immediate assistance if you're experiencing a seizure of the Land Rover Discovery's crankshaft.

To free up the damaged part, let it sit for a couple of days by exposing it to penetrating oil.

It's usually costlier to replace the entire component, so repairing the crankshaft should be done immediately.

If the repair method doesn't work, you'll need to perform some tests to determine the extent of the damage to the engine's crankshaft.

It's possible that the vehicle sustained too much damage after running on low or no oil. The cost of replacing the entire component could be as high as $450 minus labor costs.

The Land Rover Defender is prone to various issues, such as corrosion on the vehicle's underside and leaks from the timing belt and power-assisted steering.

If your Land Rover Defender has been around for several years, you must replace the timing belt.

The rubber teeth of the belt can wear down due to the combination of friction and heat. This can lead to the belt slipping and eventually cracking.

This issue could also affect the engine, so it's essential to replace the timing belt immediately. The cost of doing so for a Land Rover Defender is likely to be around $600 to $1,000.

One of the most common issues owners of Land Rover Defender vehicles face is power steering issues.

Knowing the exact cost of repairs is very important to ensure that your car is in good hands.

Sometimes, small leaks can be temporarily fixed by adding a component to the fluid reservoir. This method can help remove debris and neutralize acidity.

If the issue persists, then a more permanent solution might be required. In this case, the power steering pump might need to be replaced completely.

The cost of doing this can range from around $440 to $800, depending on the model and engine size of your Land Rover Defender.

The first Land Rover was produced in 1948. The second was released in 1958, followed by Series 3 a decade later.

The Series 3 is a classic 4-by-4 vehicle that will only increase in value if you maintain its condition using genuine parts.

Due to the age of the Series 3 cars, they usually require new brake cylinders. Most owners need to change the brake fluid regularly.

This can lead to issues such as corrosion and leaks. It would help if you changed the brake fluid every 19 months or 18,000 miles.

However, most owners need to follow this advice. An OEM replacement for the brake cylinders of a Land Rover can cost around $63 to $70.

If they aren't properly maintained, they can become damaged or stiff.

Although these components are relatively cheap to replace, they can become rusted and prevent you from extracting them from the chassis, which increases the cost of repairs.