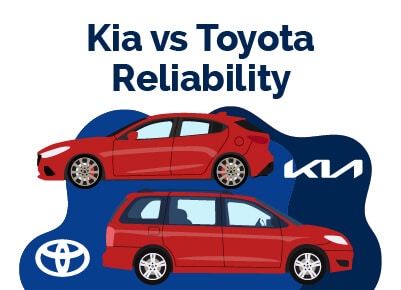 Kia and Toyota are notable brands known for their high-reliability standards. Toyota has an impressive record for making reliable cars; great quality, fewer repairs, and even low cost of maintenance. However, Kia is not left out in the race for reliability.

The main difference between Kia and Toyota is that Kia's gas mileage, design, power, and performance are considered superior while Toyota's maintenance costs are lower and their vehicles are generally considered safer.

This might sound funny, but Kia grew from a company that makes crappy cars to competing with some of the most reliable car brands.

Here's a detailed review of Kia vs Toyota reliability.

Which is Better: Kia or Toyota?

Toyota maintained an unbeatable level of reliability in the early years. This makes most of its older cars some of the most reliable cars in the industry.

On the other hand, it is not advisable to buy a Kia model from old years. You will either be battling with the engine, transmission, brake problems, or even software glitches. Kia just got better with reliability, while Toyota has always ridden on the waves of reputation; the car with the amazing build quality.

For Toyota, there is no need to prove a point. They have some of the best cars in all categories, they only need to maintain the standard. For Kia, there is a need to improve and produce better cars that wouldn’t just last long but would compete and beat “the big boys” in the car industry.

This motivation has led Kia to redefine its designs, producing cars that are beautiful and not boring to drive. The fuel efficiency of Kia cars is better than Toyota, and you will get better power delivery and drive performance. However, Kia is still battling to match Toyota’s standards in safety. This is seen in the fewer Kia safety awards compared to Toyota.

We can’t deny that Toyota has amazing build quality and impressive strength, but when it comes to design quality, there is nothing interesting about Toyota cars.

Many things are wrong with Toyota’s designs, and it all looks like the company is not on the move to end its boring designs anytime soon.

Toyota tends to focus more on engineering features and technology, paying less attention to the style and designs of its cars. In 2017, Toyota adopted a new motto, “A Raku Tan,” which means safe, reliable, simple, fun, exciting, and comfortable.

While we expect massive changes in new Toyota cars, as seen in new Toyota Camrys, we must mention that Kia cars have better designs. The grilles, ergonomics, layouts, interface, and cargo space are reasons to love a Kia car at first sight. Their cars are designed with comfort in mind and the need to make a statement.

Kia is gradually becoming a widely accepted luxury brand, so we didn’t expect less from their designs. With the Kia designs, you are not only getting beauty but also strength and durability.

For instance: who would imagine that the 2021 Kia Seltos has a build strength of up to 61% advanced high-strength steel? This is considering how cheap Kia cars are.

Although Kia has seen many recalls and failures in their designs, lately, they’ve optimized torsional rigidity, reduced body weight, strength against impacts, and powertrain and drivetrain built to last.

Toyota does it well with engineering designs, the integration of the TQM system, Jidoka, and Kaizen. However, there is a need to release cars that can make a statement on the road.

You must understand that both car brands have a cost of ownership that is cheaper than the $652 attainable across all models. You must also understand that even though Toyota has a cheaper cost of repairs and maintenance than Kia, with a Kia car, you will visit the mechanic less.

We must consider the warranty periods, engineering philosophies, and overall strength of the car.

The Toyota brand has amazing engineering principles; Kaizen, TQM, and Jidoka. These principles optimize quality over quantity, engineering, and through testing. Unlike other brands, Toyota will never release a car with unverified systems.

While it is true that Kia doesn’t have similar engineering structures as Toyota, they make up for what they have with an extended warranty, more steel-tensile strength, and an improved engine. With Kia cars, you have less chance of worrying about frequent major or minor repairs.

Although Kia still has a long way to go with providing stable engines that cover all car categories, it is important to note that Kia’s engines deliver more horsepower and speed/torque than Toyota cars.

The Kia Forte is cheaper than the Toyota Corolla, yet the Forte achieves more speed, better fuel economy, and an improved driving experience.

Toyota beats the industry in engine manufacturing by producing underpowered cars. This reduces the level of stress on the car. While Toyota aims for dependability, Kia engines are tuned to achieve fast speed and power.

Unlike other car brands, Toyota doesn’t take pleasure in frequently releasing technology packages. The Toyota safety sense, which is Toyota’s safety package, was launched in March 2015.

There was an upgrade to the safety sense 2.0 in 2018, with expectations that the third generation of Toyota’s technology package will be rolled out in 2023; Toyota safety sense 3.0.

This is compared to Kia, which is always updating its technology package and even launching the new LX technology package. However, technology and its effects on safety are not always in harmony. Most times, in the bid to match the demands of the latest tech, most car manufacturers release systems that are not reliable.

Toyota understands this, so they take their time to design before execution. While it is obvious that you can get all the latest tech on Kia cars, Toyota has a higher safety rating.

Kia offers a better fuel-efficient system than Toyota. When you put Kia and Toyota models on the same scale as Toyota, there are more Kia cars with better fuel economy.

Although there are Toyota cars with great fuel economy, like the Toyota Yaris, Toyota Prius, and the Toyota Corolla Hybrid, you can expect more fuel efficiency from Kia.

Some of the most fuel-efficient Kia cars include

The comparison between Kia and Toyota reliability can be tricky. Both cars are great and exceptional. There are just a few factors that differentiate the two.

Toyota is not the type of car that defines luxury, nor are they fast enough to compare with any major brand. They offer better safety features and low maintenance costs, but Kia has better fuel efficiency, performance, and design. Your choice between these cars should boil down to what you want in a car.

Why are Kia cars so cheap?

There are many controversies surrounding the issue of how cheap Kia cars are. It is misleading to believe that Kia cars are cheap because they use inferior materials. Kia cuts costs and makes its cars cheap by using its foundry, tariff-free imports, and optimizing the use of cheaper materials to drive high-quality designs.

How long will a Toyota last?