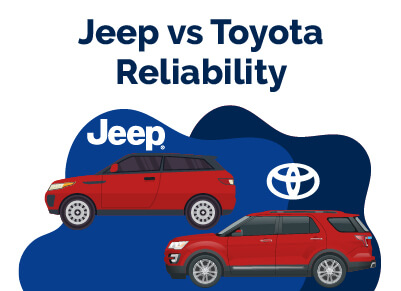 Jeep or Toyota, which is more reliable?

The main difference between Jeep and Toyota is that Toyota has higher ratings when it comes to reliability (4 out of 5 on RepairPal for Toyota compared to 3.5 out of 5 for Jeep), safety, and dependability. Jeep has better options for off-roading.

Let's see why Toyota is regarded as a much more reliable option when compared to Jeep.

Jeep Vs. Toyota Reliability: Which is Better?

There are no arguments that Toyota is better than Jeep, especially when it comes to reliability. We understand that every brand has their strengths and weaknesses. Jeep and Toyota even have the same warranty coverage. However, on an overall scale, Toyota has better offers than Jeeps.

Jeeps are specifically designed for off-road driving. This gives their performance a strict definition.

The Toyota brand has cars that are cut across different models and categories. They achieve great performance on and off-road. The versatility of Toyota cars beats Jeeps, which has a limited lineup of cars.

The reliability of Toyota far exceeds what Jeep offers, and this stems from the design philosophy and engineering principles of the Toyota team. It shouldn’t surprise you to know that no year passes without having a Toyota car earn the IIHS safety rating. This is unlike Jeep; the last time they earned an IIHS safety award was in 2019.

Toyota has better and more reliable designs than Jeeps. The design comparisons of Jeeps and Toyota goes beyond their exterior and interior designs. We will consider the build quality and overall structure of the framework of these cars.

Jeep has sustained its reputation as the car for off-road driving. This makes it essential for them to build their cars to handle the harsh force of the mountains, rough terrains, and unpleasant driving conditions. While both car brands aim to achieve functional designs, Toyota delivers a more practical approach that incorporates safety, comfort, and simplicity. This is captured in Toyota’s adoption of the Japanese slang; ‘Au Raku Tan.’

Jeep has great work going on when it comes to designs. With the iconic headlights, grille designs, wheel arches, and windshield patterns, the Jeep brand works more in upholding the heritage of its designs by introducing designs that strike a chord and, at the same time, make people feel safe. The Jeep design team has a pattern for its designs, which includes borrowing templates from the past to make modern designs. But things don’t always work that way. Instead of dwelling more on sustaining a design heritage, it is better to introduce groundbreaking designs loaded with sustainable technology.

Toyota adopts the Total Quality Management system, Jidoka, and Kaizen model for better deliveries. These engineering principles adopt a customer-first approach, constant improvisation, and a feedback-sponsored development strategy that creates room for improvement. This includes the fact that Toyota upholds the idea that car manufacturing shouldn’t be a fully automated process. Human expertise should play a larger role in guiding the machines to ensure maximum efficiency.

From the engines to the body, you will save more money driving a Toyota than a Jeep. You just have to ensure that you avoid CVT transmissions. With a Jeep, you will spend more time in a mechanic shop than with Toyota.

It is clear that Toyota is more durable than Jeep. Although Jeeps are structured to handle off-road rides and uneven terrains, Toyota has an edge in its build quality and overall vehicle strength. Toyota adopts a continuous improvement policy that gets them to continuously test their cars until proven to work.

Both Toyota and Jeep can last up to 200,000 miles, but you have a better assurance to expect your Toyota car to last more than 15 years without costing you much on maintenance. The durability, long-service life of Toyota cars even impacts their resale value. Irrespective of the fact that Jeeps are designed to uphold the standard of rugged cars, they do not embrace sustainable innovations that will make their cars last longer.

Let’s say you can expect a Jeep to do well during offroad rides, but you can rely on Toyota cars to handle any road condition, at any time, with a high level of safety.

When you compare the engines of different Toyota models with Jeeps, you get better performance from Toyota. From Toyota Fortuner vs. Jeep Compass to Jeep vs. Toyota Hilux, Toyota’s engines are way better. Although there are differences across the models offered by both cars, the standard for reliability is the same. For instance, the Jeep Wrangler delivers more power than the Toyota 4Runner, but the 4Runner will last longer than the Jeep.

Contrary to what you heard, Jeeps are not entirely bad when it comes to gas mileage and fuel efficiency. The differences in the gas mileage of Jeeps lie in the models they offer. For instance, the Jeep Wrangler achieves better gas mileage than Toyota 4Runner, but this is not the case with Jeep Cherokee and Toyota Highlander.

Both car brands are doing well in offering users more fuel-efficient systems. However, Toyota has more fuel-efficient cars in its lineup than Jeep. With the wild embrace of hybrid, you must understand that Toyota takes the lead with hybrid technology. Jeep is just new in the game with its Jeep Wrangler 4xe and Jeep Grand Cherokee 4xe.

Safety is a major factor when considering the reliability of a car. Unfortunately, Toyota beats Jeep with higher safety ratings. Toyota has more cars earning the IIHS safety award than Jeep, which has little or nothing to boast about due to its inconsistencies with safety.

As a matter of fact, it is hard to find any Jeep with a 5-star safety rating. The Jeep Grand Cherokee and the Jeep Wrangler have four-star ratings on rollover and front crash ratings.

There are no arguments that Toyota is more reliable than Jeep, but you might consider your needs and budget. If you want a car strictly for off-road driving, you should go for a Jeep.

Toyotas have an all-around performance, but there’s no need to stress your Toyota car for mountain rides when you could get a Jeep. However, you might consider the reliability, durability, and efficiency Toyota offers, which is lacking in Jeeps.

Why are Toyotas better than Jeeps?

There are many reasons why Toyotas are better than Jeeps. You get better gas mileage, performance, safety, and durability from Toyota cars. It is cheaper to maintain and repair a Toyota than a Jeep.

Are Jeeps worth the money?

Jeeps are worth your money if you are a fan of off-road driving. They provide amazing traction, engine strength, and power. You can rely on their horsepower and torque to maneuver the worst terrains.