Are Infinitis Expensive to Maintain? 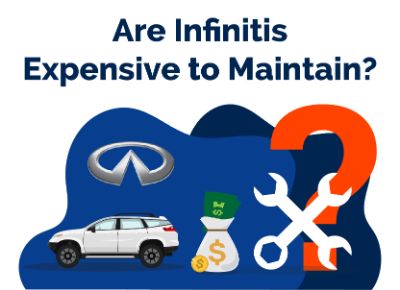 Maintaining your vehicle in top condition is crucial to ensure it performs at its best. One of the most desirable features of the Infiniti luxury vehicle is its smooth and sleek appearance.

Although it's not always possible to have the money to fix your car immediately if it develops a fault, you can still find the best Infiniti repair shop if you need help.

Now, when buying a new or used Infiniti, one of the most important questions you'll likely have is the cost of maintenance. But are Infinitis expensive to maintain?

This blog post will give you a comprehensive breakdown of the costs associated with maintaining a new or used Infiniti.

Yes, the Infiniti is reliable. Despite having solid reliability ratings, the cost of maintaining a new or used Infiniti will be slightly higher than average due to its luxurious nature.

According to RepairPal, an average Infiniti requires around 0.7 times per year to perform unscheduled maintenance, which is significantly higher than the average of approximately 0.3 for the average vehicle on the road.

However, only 10% of these visits are considered severe, significantly lower than the average for major brands.

Are Infinitis Expensive to Maintain?

The cost of maintaining a new or used Infiniti will be higher than average due to its higher-end nature and solid reliability ratings. According to RepairPal, the annual repair cost for a new Infiniti is around $638.

Getting a new car will inevitably come with additional expenses. One of these is the cost of maintaining your vehicle, which is very important to ensure it runs smoothly. Some cars cost more yearly than others, and Infiniti is one of them.

However, it's expensive due to how less reliable it is compared to other luxury vehicle brands such as Lexus and Acura.

How Expensive Are Infiniti Models to Maintain?

As a luxury brand, Infiniti is typically considered expensive to maintain. However, since fewer cars are sold, data on the average cost of maintaining a vehicle is hard to come by.

Understanding the cost of maintaining each model and year will allow you to decide when buying a new or used Infiniti.

We found that the maintenance costs for Infiniti models end up somewhere in the middle to the higher end of the spectrum.

It was already expected that the maintenance costs for Infiniti models would increase due to their size and luxury. In addition, Infiniti cars are also quite large.

Discussing the average cost of various general maintenance tasks is also important. Doing so will allow you to compare the costs of different types of maintenance with your Infiniti.

Because of this, Infiniti cars are more expensive than average. This is mainly because they need synthetic oil, and luxury cars typically pay more for simple procedures.

The cost of replacing the brake pads on an Infiniti typically ranges from around $299 to $385 per axle.

On the other hand, replacing the pads on an average vehicle would be about $150 to $300. This is mainly due to how large the cars manufactured by Infiniti are.

This is because luxury brands' cars require larger batteries to power their various features.

The cost of replacing a set of spark plugs on an Infiniti typically ranges from around $383 to $766, significantly higher than the average cost for a regular car.

This is due to how difficult it is to replace the spark plugs in an Infiniti. The brand also uses platinum spark plugs, which are more expensive but can last longer than their copper counterparts.

Since Infiniti doesn't have a traditional fuel filter, replacing this component is unnecessary.

The cost of replacing the cabin air filter on a regular car typically ranges from around $60 to $80, significantly less than the average cost for an Infiniti.

The cost of replacing a set of headlights on an Infiniti typically ranges from around $250 to $292.

On the other hand, the cost of replacing the bulbs for a set of headlights on a regular car is around $100 to $150.

This is due to how Infiniti uses high-intensity discharge (HID) headlights, which are more powerful than halogen lights.

Since luxury brand cars are larger, they require larger tires. On an Infiniti, replacing tires is typically around $300 to $700.

You'll likely come across a timing belt replacement when owning a car. The belts need to be replaced after 100,000 miles, and the cost is typically around $1,000 to $1,500. Infiniti cars use chains that are more expensive than timing belts.

Are Infinitis More or Less Expensive Compared to Other Brands?

Before buying an Infiniti, it's important to thoroughly analyze the brand's various features and services to ensure that it's the best choice for your vehicle.

We've collected data from 24 carmakers to provide a comprehensive overview of the average maintenance cost for each model.

The average cost of maintaining an Infiniti is $638, the 15th of 24 brands sold in the U.S. This means that the luxury brand is more affordable than other cars sold in the country.

Although it's important to compare Infiniti with other brands, it's only sometimes possible since these manufacturers also make similar vehicles.

You can gain a deeper understanding of Infiniti by comparing the brand with other Asian luxury models, such as the Lexus and the Acura.

We found that the annual maintenance costs for Lexus are $551, while those for the Acura are $501.

Given that Infiniti ends up costing more than its competitors, this means that it's more expensive to maintain an Infiniti than other brands.

Why Is Infiniti Expensive in Terms of Maintenance Costs?

The final question that must be asked is why Infiniti is more expensive than other luxury brands such as the Lexus and the Acura.

We can answer this question using the data collected by analyzing it. They include the following:

1. Infiniti Is a Luxury Brand

The price difference between different brands, such as Toyota, Honda, Mazda, and Hyundai, needs to be explained.

One of the main reasons why Infiniti is more expensive than other luxury brands is the use of advanced technology and newer parts.

When a component or technology fails, it's typically more expensive to replace than fix it on a mainstream brand.

Also, finding the parts can cause the price to go up again, which can be very challenging.

This is why luxury brands such as Infiniti, Lexus, and Acura are more expensive than mainstream models.

2. Infiniti Is Less Reliable Than Lexus or Acura

The price difference between the Lexus, Infiniti, and Acura is also caused by one factor. We discovered that the reliability of these luxury brands is higher than that of Infiniti.

Through data collected by Repairpal, we were able to identify the factors that set these models apart from their mainstream counterparts.

For instance, with the Lexus, cars have to go to a garage around 0.53 times a year for unexpected maintenance, with an 8% chance of the problem worsening.

For the Acura, this issue typically occurs around 0.39 times a year, with an 8% chance that it will get worse.

For the Infiniti models, this issue typically occurs around 0.67 times yearly. A 10% chance of the problem getting worse.

Even though the numbers may seem small, these factors can significantly affect the cost of maintaining a car.

For instance, if a vehicle has to go to the garage almost 50% more often than an Acura, this will increase the overall maintenance cost.