Hyundai Palisade vs. Kia Telluride: Which Is the Better SUV? 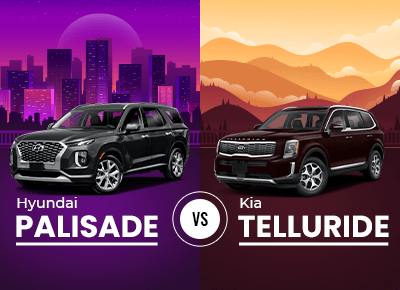 Two of the hottest three-row SUVs on the market right now are built by Hyundai and Kia - and they share far more than their parent companies may care to let on.

But are the Hyundai Palisade and Kia Telluride mere exercises in badge engineering?

We don’t think so, and nor do other automotive experts, many of whom have showered awards on these two range-topping models. 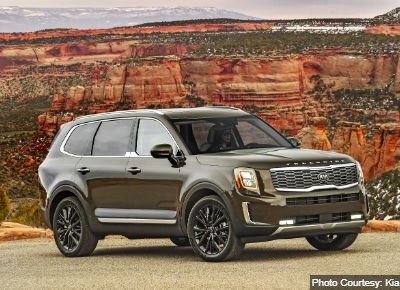 The numbers make clear that these two SUVs both cast the same shadow, with the Palisade measuring just a hair shorter and narrower. That disparity is likely due to the styling, something we’ll dive into greater detail about in just a moment.

You’ll also notice both vehicles ride the same 114.2-inch wheelbase. That’s not surprising - there are massive cost savings for parent-company Hyundai by sharing a wheelbase. The 114.2-inch span is about par for the segment, trailing the Volkswagen Atlas (117 inches), Chevrolet Traverse (120 inches), and Ford Explorer (119 inches) but edging out the Toyota Highlander (112 inches) and Honda Pilot (111 inches). 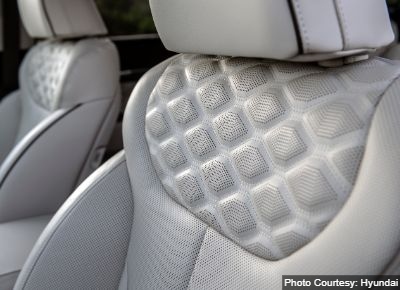 The biggest differentiator between the Palisade and Telluride is also the most subjective: styling. While the engineers were working together to hash out the mechanical details, the stylists were duking it out in the studios. Ultimately, Kia went for the more aggressive look and Hyundai aimed for luxury.

Both styles are attractive in their own right, but there’s no doubt that the Hyundai is the more glamorous of the two with its abundance of chrome on the front end. Slightly more flamboyant character lines along the Palisade’s bodysides also help cultivate a more urbane image than the squared-off Telluride.

The Telluride also has a few other tricks up its sleeve, such as putting the painted rear roof pillar aft of the rear cargo side glass - the Palisade puts its big pillars just behind the rear doors. These sort of details help trick the eye into thinking that these two SUVs are less alike than they really are.

We mentioned that the Kia and Hyundai share almost identical dimensions. It’s the same story in the cabin, where the stated passenger volume of both SUVs comes within five cubic feet of each other. The smaller of the two is the Palisade, which checks out considering it is the physically smaller of the two. Interior design differences may also eat into some of the total overall volume. 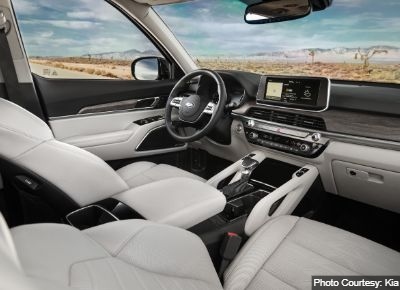 Legroom shouldn’t be a concern with either model. Up front occupants enjoy a typical 41 inches of legroom. The second row is more impressive: a full 42 inches in both models. That’s better than most of the competitive set, including the Ford Explorer, Honda Pilot, and Chevrolet Traverse.

Most trims of both the Palisade and Telluride also feature standard second-row captain’s chairs, which reduces total seating capacity from eight to seven for both SUVs. A three-across third row is standard on all models, but we imagine it can get a bit cramped with three passengers vying for the mere 31 inches of legroom. 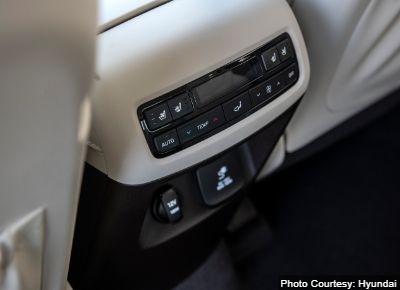 On the low end the Kia and Hyundai are true to their budget roots, coming standard with modest cloth upholstery, manually-adjusted seats, and manual climate control. Infotainment is also the same on both vehicles: an 8.0-inch touchscreen with wireless Apple CarPlay and Android Auto is standard, while upper versions get a 10.3-inch touchscreen that, oddly enough, requires a wired connection for smartphone connectivity.

At the top end of the range, however, you can see where the Telluride and the Palisade begin to take on their own identities. Luxury becomes a decisive factor once you begin analyzing the highest price points of these SUVs.

Let’s first consider the Telluride. Its range-topping model is the SX Turbo, which starts at $42,490. Among its amenities are 20-inch wheels, leather upholstery, heated and cooled front seats, and dual sunroofs. It also comes with 10-speaker Harman-Kardon audio and a surround-view camera, as well as the full roster of active-safety gear. If you want more you’ll need the Premium Package, which tosses in Nappa leather and second-row heated and cooled seats. 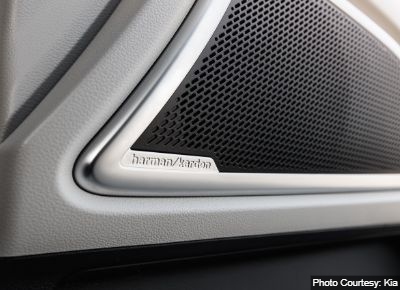 The Palisade, on the other hand, doesn’t cap out until the $46,200 Calligraphy Edition. The extra money buys extravagances such as a microfiber headliner, 12-speaker Harman-Kardon audio, a heated steering wheel, and a full digital display. None of these listed features are available on the Telluride.

The Telluride offers Nappa leather as an option on its top model; The Calligraphy gets the stuff standard, and Hyundai also stitches it in a quilted pattern on the seats and doors for a more upscale look.

There’s no doubt you’ll fork over more money for a top-shelf Palisade, but the additional coin buys a more luxurious experience. We’d argue that this is where these two SUVs are furthest apart in philosophy and appeal. 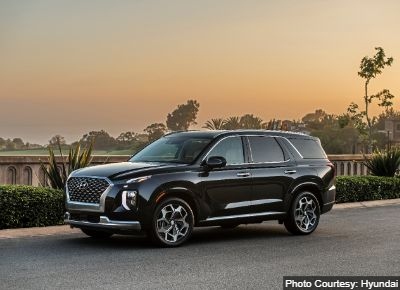 There isn’t much to say here. Both the Telluride and Palisade are loaded up with driver assists such as automatic emergency braking, blind-spot monitoring, forward-collision warning, and lane-keep assist.

Both also pass the IIHS and NHTSA crash tests with flying colors, but only the Palisade gets the coveted Top Safety Pick Plus rating from the IIHS when equipped with its exclusive optional headlights.

Again, not much differentiates the Palisade from the Telluride. Under the hood, these two SUVs share the same 3.8-liter V-6 engine, eight-speed automatic transmission, and an available all-wheel drive system. Each SUV is rated for 290 horsepower and will return the same EPA-rated 21 combined with all-wheel drive. 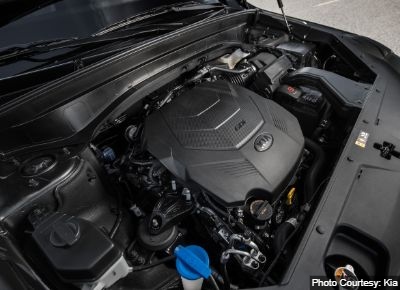 Despite the Telluride looking the more outdoorsy of the two, we wouldn’t take either far from the pavement. They share a road-biased all-wheel drive system that isn’t intended for any serious backcountry work but is just fine for getting to the average trailhead. 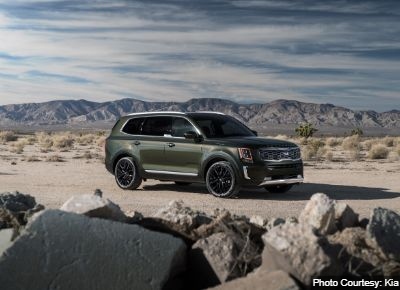 Consumer Reports has scored both the Telluride and the Palisade four out of five for projected reliability, but the overall numerical score put the Kia ahead with 92 points, a 10-point advantage over the Palisade. That spread is in favor of the Kia largely for small ergonomic advantages, so don’t get too hung up on those figures if you’re favoring the Palisade.

Which Is Better, The Kia Telluride or Hyundai Palisade?

If more luxury is your preference, the Palisade is the better bet, particularly on top trims. It offers certain fancy features that aren’t found on the poshest Tellurides for any price.

If you prefer a more squared-off, rugged style, the Kia will better scratch your itch. Whichever you choose, you can’t go wrong with the compelling package of either SUV.

Which is better - Telluride or Palisade?

It depends on what you’re looking for. If more luxury is your preference, the Palisade is the better bet, particularly on top trims. If you prefer a more squared-off, rugged style, the Kia will better scratch your itch.

What trim levels are available on the Kia Telluride and Hyundai Palisade?

Why is the Kia Telluride so popular?

In a word, value. The magic of both the Telluride and the Palisade is that they each deliver a feeling of genuine luxury at price tags that are almost too good to be true. While the rest of the competition feels mainstream even in their upper trims, these twins make you feel that you’ve made it - the only thing missing is a German emblem on the steering wheel to convince you you’re in a luxury SUV.

Why does Kia have a bad reputation? Should I be worried?

The origins of the bad reputation that continues to dog Kia and Hyundai goes back to the build quality and reliability issues in the 1990s. That began to be rectified twenty years ago when the brands debuted their 10-year powertrain warranty. Nowadays the brands are vastly improved from those long-ago days. There shouldn’t be any concerns over credibility with the current crop of Hyundai and Kia products.

What other SUVs compete with the Kia Telluride and Hyundai Palisade?

All three-row crossovers and SUVs that aren’t massive, full-framed behemoths like the Chevrolet Tahoe. Among the key competitors are the Ford Explorer, Chevrolet Traverse, Honda Pilot, Toyota Highlander, Subaru Ascent, and Volkswagen Atlas.