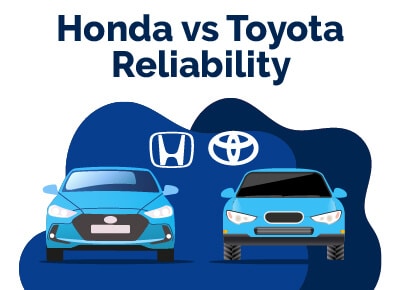 Honda and Toyota are Japanese automakers, and they are renowned for producing quality and durable cars, most of which we often find on the road. These cars have a strong reputation for excellence, high-quality deliveries, strong build, and impressive safety features.

However, a Honda vs. Toyota reliability analysis will help you decide which of them will suit your needs. Toyota is more reliable than Honda, beating Honda in numerous categories like performance, fuel efficiency, longevity, durability, and overall dependability.

Toyota is the second most reliable car brand in the automobile industry, so it is not strange for them to outrank Honda on reliability ratings.

Here is a detailed comparison of Honda and Toyota's reliability to help you make informed decisions.

Remember that the information we share is based on individual experiences and collective surveys and reviews.

Honda vs. Toyota Reliability: Which is better?

In fact, Toyotas are one of the oldest cars you will find on the road. The reliability of Toyotas spread across different models; unfortunately, Honda doesn’t have a full-sized truck.

Toyota cars offer better fuel efficiency and durable frames, although Honda performs better by introducing cars with better designs and sleek interiors. However, luxury and designs aren’t the only things you should rely on.

The reliability ratings of Toyota and Honda fluctuate on reliability forums. For instance: RepairPal states that Honda is more reliable than Toyota.

Both cars have a reliability rating of 4.0 out of 5.0, but Toyota occupies the 8th position out of 32 car brands, with a 0.3 chance of visiting a mechanic and a 12% probability of severe damage.

Honda ranks 1st amongst 32 car brands, with a 0.3 chance of visiting a mechanic and a 10% probability of severe damage.

We can’t build our conclusions on reports from survey forums but on our thoughts and experiences using both car brands. The truth is, while we believe Toyota edges above Honda on reliability, the strengths of these brands lie in some models.

Toyota is your go-to brand when you want reliable cars that can make a bold statement on the road. Honda handles the smaller versions.

Honda has better designs than Toyota. Toyota’s designs are considered plain and boring compared to Honda, which invests more to create designs that stand out. So far, the Toyota Camry, Corolla, RAV4, and Highlander seem to be the best car designs that Toyota has ever made.

At this, they all seem to maintain a uniform design/concept: bold, large, and simple. It looks like Toyota prefers the use of a basic-uniform design for its cars to handle brand management, making it easier for you to identify their cars.

Unlike Honda, which always wants to make a stylish statement with its designs.

Please don’t be mistaken; Honda’s catchy designs don’t mean that they are built to last. This does not interpret that Honda makes substandard cars.

Toyota pays great attention to durability and functionality, introducing lesser designs to the market. This is different from Honda, which puts in great efforts to churn out unique designs, creatively giving each model a unique face.

Toyota and Honda are both leading brands with impressive technology packages. Toyota has the amazing Toyota Safety Sense (TSS), while the Honda sensing suite supports Honda. Honda and Toyota have a tie in the technology comparison.

However, there are slight differences in their operations. Toyota places more emphasis on dependability and reliability, so they roll out updates that last. This gives them time to work on new features and not frequently introduce new features.

The Toyota technology package comes as an update, unlike Honda, that incorporates new features in every new model. Toyota runs from the Toyota Safety Sense 2.0, 2.5, and the latest 3.0.

Each update has more features than the other, and in some cases, like the TSS 3.0 offers an improvement of already existing functions, with additions to functions that improve driving conditions. This includes an extended detection range powered monocular camera and millimeter wave radar.

However, placing the Toyota Safety Sense and the Honda Sensing Suite on a head-to-head comparison, we discovered that Toyota beats Honda on safety technologies.

These features are found in the Toyota Safety Sense 2.5 but missing in most Honda standard technology packages and are not available in all Honda models and trims.

When looking at the safety of Toyota and Honda, both car brands have maintained a high reputation for safety.

Both car brands have different models occupying high safety ratings from IIHS and NHTSA. Honda and Toyota occur in all categories in the IIHS top safety pick, from small cars to large pickups. Unfortunately, Honda is not considered the safest car in the large/small pickup, midsize SUVs, large luxury cars, or large car categories.

The Toyota Corolla offers a hybrid variant that achieves a 52-mpg combined. This is higher than the 36-mpg achieved by the Honda Civic.

Toyota is more durable than Honda. Toyota cars have an impressive record of lasting longer than Honda cars.

We advise you not to buy a Toyota minivan against a Honda minivan. Hondas are more durable, with Toyotas battling many faults.

On an overall scale, you must understand that the durability of your Toyota or Honda lies in how well you maintain them and the driving conditions you subject them to.

However, consumer reports indicate otherwise. The cost of owning and maintaining a Toyota seems lower than Honda.

On a five to ten-year ownership span, Toyota’s repair and maintenance costs are between $291 to $300. This is relatively cheaper than Honda, which costs $370 to $400 to maintain.

Drivers always rely on warranty periods for a cost-effective drive experience. Your warranty period gives you ample time to enjoy your car before worrying about repair and maintenance costs.

Honda and Toyota offer almost the same warranty period, from basic, powertrain, and even emission coverage.

The Honda engines dish out greater power, impressive performance, and the ability to last long without numerous repairs and maintenance.

You might believe that Toyota focuses on making fuel-efficient engines, while Toyota has more interest in producing high-performance engines. This is entirely false.

There are a lot of Honda turbo engines that deliver solid performance, as well as fuel efficiency. While we can confirm that Honda makes high-performing engines with durable strengths, Toyota engines are more reliable.

So, which is a better brand, Honda or Toyota? We’ve given you reasons to believe that Toyotas are more reliable than Honda, but this does not make Toyota the best brand in the market or the best option for you.

It would be best if you chose cars according to your needs and budget. No matter how good a brand Toyota is, they produce bad minivans. So, you must consider the individual strength of your preferred model to know the best option for you.