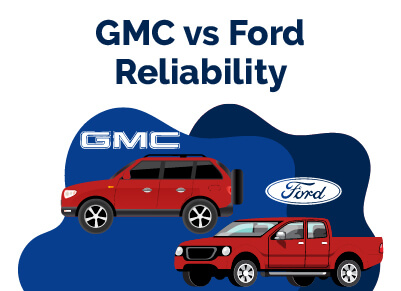 There are many reasons why you might consider buying either GMC or Ford cars. However, it is important to verify the reliability of these cars before you buy them. Unlike other car brands, with an endless variety of cars, GMC is limited to trucks, Hummers, SUVs, and commercial cars.

Ford has a similar lineup of cars but includes hybrid models, which GMC doesn’t have. Both cars have the same warranty coverage, although while Ford poses as a stronger brand in EVs, GMC dominates autonomous driving with its supercruise driver assistance. However, even with the close margins of both car brands, Ford is more reliable than GMC.

Ford has a higher reliability rating than GMC cars and higher dependability scores, and you will expect minimal problems with Ford cars than you will with GMCs. This includes the fact that Ford has higher safety ratings than GMC. The differences in the reliability of Ford and GMC cars are not much, but it is enough to help you make a decision.

Read on to understand more about GMC vs. Ford reliability and why Ford is better.

GMC Vs. Ford Reliability: Which is Better?

You must understand a few things about the GMC and Ford brands. Both car brands are fairly reliable, with inconsistent and unstable reliability ratings. But, when it comes to choosing one out of both brands for a reliable car, Ford is better.

Consumer Reports rates Ford as the 22nd most reliable car out of 26 car brands, while GMC is the second worst car brand. The JD Power’s 2022 dependability survey ranks Ford 16th out of 32 car brands with 188 problems per 100 cars, while GMC sits in 17th position with 192 per 100 cars.

When it comes to engine strength and performance, Ford’s Powerstroke engine is better than GMC’s legendary Duramax. Although Ford and GMC cars have the same warranty coverage, Ford offers a 5-year/100,000-mile Powerstroke diesel engine warranty.

When it comes to maintenance and repairs, you will have fewer reasons to visit the mechanic with a Ford than with a GMC. However, maintenance cost is cheaper on GMCs than on Ford.

GMC and Ford have different design philosophies that tilt toward achieving different goals. While GMC adopts bold designs, Ford prioritizes motion-oriented designs. It is hard to place the designs of any of both cars above the other; it all boils down to preference.

Irrespective of the fact that GMC is tilting towards becoming a luxury brand, their designs still give you that truck-like feeling.

Ford is not an exception, although, unlike GMC, their design doesn’t lay much emphasis on trucks. Although Ford trucks adopt the rugged framework, its SUV lineup is a beautiful site to behold.

This is seen in the adoption of bold and dynamic lines and the implementation of full surfaces to give the car the appearance that it is always in motion, even when it is at rest. This may sound funny, but the essence of the Ford kinetic design is to bring to life Ford’s dynamic drive.

The Ford design team adopts this to create an appealing car structure that ignites the emotions of passersby. Immediately you see a Ford car, your instinct strikes, reminding you how much you need one. From the interiors to the exteriors, you get ample space from Ford cars.

GMCs are not also left out. The GMC brand is big in technology. Both cars are making headways with autonomous driving.

Ford utilizes the Ford Co-pilot 360, and GMC has the supercruise. Both technologies are level 2 autonomous systems, so they have no major differences.

For instance, Consumer Reports rates the GMC Sierra as the cheapest truck to maintain, alongside the Chevy Silverado.

Repairpal confirms this, insisting that although GMCs have a higher chance of major problems, they are cheaper to maintain than Fords. Ford comes out with a $775 average annual repair cost, while GMC is $744.

Statistics from Yourmechanic affirm the same, although the values are slightly different. In ten years, Ford cars have an average maintenance cost of $9100 while GMC is $7800.

The cost of maintaining and repairing a GMC might not be as cheap as what is obtainable from Toyota, Honda, and Lexus cars, but they are cheaper than what Ford offers. This also includes the fact that GMC parts are cheaper than Ford parts and easier to find.

Ford has a better durable structure than GMC. We would have easily told you that GMC cars can last up to 300,000 miles and Fords 200,000 miles. But it doesn’t end there. You don’t need to drive any of these cars to understand how durable they are. We are here to guide you.

Driving a Ford car feels different from driving a GMC. These cars are built solid, with enormous strength that gives you the assurance that they can tow anything without breaking down. We cannot say the same about a GMC.

When you make a list of some of the strongest trucks, you will mention Ford cars before mentioning a GMC.

Ford offers better engines and performance than GMCs. There is no way you will put GMC’s engines to match Ford’s Powerstroke engine. Compared to a GMC, Ford is a better choice for towing, strength, and even speed.

You have a better lineup of engines from Ford in all categories; SUVs, trucks, etc. On a narrow scale, there are better engines on most Ford cars than GMCs. The Ford F-150 has stronger engines with better performance than the GMC Sierra.

Although, you will get a better engine/performance from a GMC Yukon than you would on the Ford Expedition. Ford Escape also beats GMC terrain with better horsepower and engine strength.

You should expect better reliability from GMC engines than you will get from Ford.

You must understand that this is not the same with GMC and Ford trucks. Trucks are not known for fuel efficiency, so you shouldn’t expect any from Ford or GMC to have great gas mileage.

Ford has a higher safety rating than GMC. For the past four years, from 2018 to 2022, there hasn’t been any GMC car that earned the IIHS safety rating.

The last GMC car to earn the IIHS safety rating was the 2017 GMC Acadia 4-door SUV. This is compared to Ford, which has seven cars with the 2021 IIHS Top safety pick (+), as seen in 2022. We cannot rule out the possibility that GMC has good safety and technology, but Ford does it better.

GMC and Ford cars are not on the top of the list of cars we will recommend for their reliability. However, if you are stuck between a GMC and a Ford, you should choose a Ford.

Ford offers better gas mileage, engine strength, speed and overall performance. The designs are great on both cars, but you will spend less maintaining a GMC than a Ford.

Do Ford and GMC use the same transmission?

Even though GMC and Ford are big rivals, they use the same transmission. This became possible after Ford and General Motors teamed up to develop the new 9-speed and 10-speed transmissions. So, as it stands now, the 9 and 10 transmission is compatible with Ford and GMC cars.

Is GMC the same as Ford?

No. GMC is not the same as Ford. GMC was founded by General Motors, while Ford is owned by the Ford brand. General Motors (GM) owns only Buick, GMC, Cadillac, and Hummer. Ford isn’t on the list.