Is Genesis Expensive to Maintain? 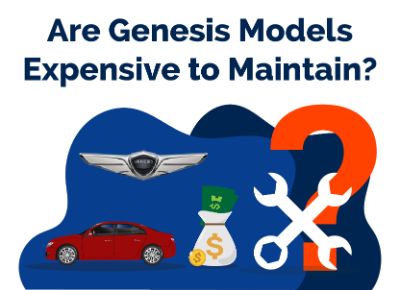 Hyundai's new luxury brand Genesis was created in 2015 to compete against Mercedes-Benz, Lexus, and BMW.

Its larger models, such as the G90 and G80, are designed to go head-to-head with those from the German brands. The compact G70, on the other hand, is an excellent value for its class.

The Genesis lineup features desirable SUVs, such as the GV70 and GV80. Also, a new all-electric vehicle called the GV60 is expected to arrive shortly.

But besides the price, other factors can affect the cost of car ownership. Some of these include registration fees and insurance premiums.

With the help of this information, most people can quickly determine the vehicle's estimated annual cost. But is Genesis expensive to maintain?

In this article, we will discuss everything you need to know about the cost of maintaining Genesis cars.

Are Genesis Expensive to Maintain?

The Genesis lineup and its SUVs are relatively inexpensive to maintain compared to other luxury vehicles.

This is because of its low cost of ownership and good reliability. In terms of repairs, Genesis is typically less expensive than other luxury cars, such as those from BMW, Cadillac, and Mercedes-Benz.

According to RepairPal, the average cost of repairs and maintenance for a Genesis G80 is around $565, significantly cheaper than the $976 average for full-size luxury cars.

Despite its relatively low cost of ownership, Genesis cars are also excellent on gas. They don't carry a high insurance premium and still depreciate at a similar rate to other luxury vehicles.

The Genesis lineup and its SUVs are relatively inexpensive to maintain compared to other luxury vehicles.

In addition, the cars and SUVs share parts with other models from the company (Hyundai), which makes them more affordable to repair.

The Genesis lineup, as well as its SUVs, are relatively reliable compared to other luxury vehicles.

This is because of the excellent track record of the company's parent company, which makes reliable cars.

Despite being more complex and less reliable than mainstream vehicles, the Genesis lineup still performs well against some of the brands' competitors. For instance, the G80 midsize luxury sedan is an excellent example.

RepairPal, a network of certified repair shops, claims that the Genesis G80 is significantly more reliable than other luxury vehicles, such as the BMW 5 Series, E-Class, Audi A6, and Mercedes-Benz.

Although Genesis cars are less reliable than some luxury vehicles, such as the Lexus and Acuras, they still come with a 10-year/100,000-mile factory warranty, one of the best in the industry.

Despite being more complex and less reliable than mainstream vehicles, the Genesis lineup still performs well against some of the brands' competitors.

Its cars and SUVs are relatively reliable compared to other luxury vehicles, such as those from BMW, Cadillac, and Mercedes-Benz.

When it started developing its luxury brand, Hyundai decided to benchmark BMW. This means that the Genesis lineup is more likely to be a part of the sports car spectrum than other luxury vehicles.

Most Genesis models come with either all-wheel drive or a rear-wheel drive configuration, which provides drivers with a more enjoyable ride.

This is compared to other luxury vehicles, such as those from Lexus, Infiniti, and Cadillac.

In addition to being fun to drive, the Genesis lineup provides drivers with a more comfortable ride. Its powerful and fuel-efficient engines are ideal for handling rough road surfaces.

The performance of the Genesis lineup is significantly better than that of its corporate siblings, the Hyundai and the Kia.

It's also a competitor to some of the world's most famous luxury vehicles, such as those from BMW, Mercedes-Benz, and Jaguar.

The Genesis brand aims to provide world-class luxury at an affordable price. Its interior design features high-end materials such as leather or vinyl, brushed metal, and real wood trim.

The Genesis lineup has various convenient and tech features, such as an easy-to-use navigation system with a large touchscreen, Apple and Android Auto connectivity, and wireless charging.

The Genesis lineup has various standard features, such as heated and ventilated seats, LED headlights, and a head-up display.

These are among the many features that make the Genesis a more luxurious vehicle than other mainstream models.

The success of the Genesis brand can be attributed to its strong competition in the premium car segment. It can also provide drivers with better quality than other brands at an affordable price.

The Genesis lineup is also able to provide drivers with a variety of modern and convenient features. There are many reasons why it's a popular choice among luxury vehicle buyers.

The Genesis lineup is significantly higher than other mainstream models from various companies, such as the Hyundai and the Kia. It can also provide drivers with better quality and more features at a lower price.

It also comes with more standard features and performance comparable to those offered by other luxury vehicles.

The combination of the Genesis lineup and SUVs allows consumers to get a premium-level vehicle at an affordable price.

Due to its relatively low starting price and Genesis' lack of recognition and prestige, used vehicles from the brand can be quite cheap. They usually come with excellent packaging and are of great value.

The Hyundai Genesis has an annual maintenance cost of $565, which is significantly cheaper than the average vehicle's $651 cost.

The table below shows the various cars in this system, and the Genesis is ranked higher than the average vehicle.

How Frequently Does a Hyundai Genesis Require Maintenance?

Although we can analyze the data on a make-by-make basis, factors such as miles traveled, conditions, and driving habits can also affect the results.

Older cars typically require more frequent maintenance, while newer models can go longer without getting the same level of attention.

The score is presented in terms of a car's frequency, and if it has a score of 3, it would need major repairs every year. The closer the score is to 0, the longer the model can go without major maintenance.

The frequency score of the Genesis is 1.739999999998. This means that it's significantly worse than the average vehicle.

It's important to point out that reliable vehicles can also require regular maintenance but at a lower overall cost.

For instance, domestic brands typically require higher visits but at a cheaper overall rate. This doesn't mean that the car breaks less often, but it shows that it's easier to fix when it does.

The Severity of Repair and How It Impacts Hyundai Genesis Reliability

Some repairs are beyond the average cost of repairs. These are referred to as "big deal" repairs and typically require replacing major components or an engine.

RepairPal uses a severity score to identify these types of repairs and their reliability ratings.

The severity score determines the likelihood that a specific vehicle model or make will have a major issue. A score nearer 100% indicates that the vehicle will most likely need major repairs.

The NHTSA uses the severity score to enforce the safety standards of vehicles. It helps reduce the number of accidents involving cars.

The severity score of the Hyundai Genesis is 14%. This is higher than the average for all vehicle models, which is 12%.

A vehicle's severity score can also help determine if you should consider getting an extended warranty. Although it may sometimes not make economic sense, extended warranties can help avoid costly repairs.

Your vehicle's requirements and routine maintenance costs can vary depending on the make and model of your car.

Having a well-defined maintenance schedule can help you avoid expensive repairs. Most vehicle owners' manuals have a list of maintenance services that are required to be performed.

New vehicles require less maintenance now that mechanical advancements and computerization have made their design more efficient. As a general rule of thumb, some general expenses are included in the maintenance cost.

A regular oil change is one of the essential factors you should consider when maintaining your vehicle. It's a standard procedure that can help prevent engine problems.

Another essential factor that you should consider when it comes to maintaining your vehicle is regular tire rotation.

Since the front two tires of a car are typically the most weight-bearing part, a tire rotation is required to distribute the stress evenly across all of its tires.