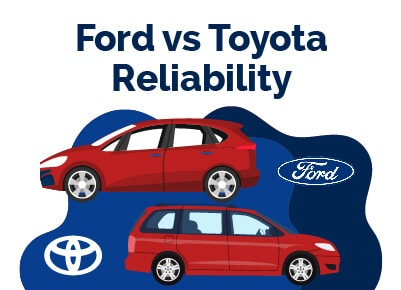 Ford and Toyota are strong names in the automobile industry. When you mention Ford or Toyota cars, there are references to their build strength, reliability, and rugged performance. Ford boasts of the F-150, just as Toyota boasts of Tundra.

These car brands have great cars in different categories. We will be careful not to talk down on Ford’s strengths and peculiarities, but if you are considering buying a car between the two brands, then you should go for a Toyota if reliability is your primary concern.

Toyota is more reliable than Ford. They offer higher safety ratings, cheaper repair/maintenance costs, and better dependability. Ford beats Toyota by producing better trucks that can haul anything you mount on them without damaging the transmission.

Let’s explore Ford vs. Toyota reliability, guiding you on what to consider before buying one.

Which is Better: Ford or Toyota?

It is difficult to place any of these cars above the other. This is because their reliability is enviable. Although Ford is an American car brand, and Toyota a Japanese brand, the differences in the reliability of these cars go beyond their country of origin.

The 2021 JD Power dependability survey rates Ford 2/5, with Toyota earning 4/5 reliability. This is a downgrade from the 5/5 Toyota and Ford’s 3/5 score for 2017. In a survey conducted between Ford and Toyota cars, we found out that 100 Ford cars recorded 130 problems. This is a more problematic scale than Toyota, which has 98 problems per 100 vehicles.

The engineering philosophies of Toyota cars make them produce more durable cars that last longer than Ford with fewer problem margins. The argument of “faster driving” is dependent on the driver.

Although Toyota engines are not overburdened with the need to deliver a burst of power, there are Toyota cars that outperform Ford in terms of speed.

The popularity of these two car brands makes it easier to fix them when a problem arises. You shouldn’t experience difficulty getting the spare parts for these cars.

Ford and Toyota have great safety features, but Toyota has more cars earning high safety ratings. The differences are not much, but it is important to cite them.

When it comes to design, you should expect the best from Ford. Toyota is too focused on making durable cars that they place less emphasis on the beauty of their cars. From Toyota cars, you are assured of better build quality.

Unlike Ford cars, your Toyota has fewer chances to leak oil after 100,000 miles. This greatly depends on your driving conditions. The Toyota brand beats many car manufacturers, including Ford, by not releasing untested technologies and systems. Until it is tested and proven, it won’t be released.

Toyota’s designs emphasize functionality and durability, the ability of its engines and parts to last till the end of the world. Ford doesn’t guarantee such strength, but they are attractive and all about performance.

This doesn’t mean that Ford’s designs are not durable; we are only implying that Toyota has better engineering and design philosophies.

Toyota employs the total quality management system, Jidoka, and kaizen engineering principles. These systems ensure that proper supervision is sustained, a customer-first approach, and automation is blended with human expertise and sustainability.

As a Toyota user, you are assured of systems you can rely on for zero chances of frequent breakdowns and high efficiency.

The Toyota brand is not the type of company that struggles to be the first to release a technology. The choice between Toyota and Ford designs is if you are looking for a performance car or a functional car that will handle your daily trips without any worries.

With Ford, you will spend an annual average of $775. This is not only costlier than the average cost of all models but more expensive than what it costs to maintain a Toyota.

The repair and maintenance cost for Ford cars varies for different models and production years. For instance, it is cheaper to maintain a Ford escape than a Ford Endeavor.

Ford and Toyota offer the same warranty coverage. However, there are differences in the standard of durability achieved by both brands. It is normal to believe that both Toyota and Ford can last up to 200,000 miles or more, but when it comes to longevity with fewer breakdowns, Toyota wins.

Toyota employs robust engines that are more durable. Ford optimizes its cars for performance, better driving experience, and traction. You will expect a Toyota car to handle rough conditions more than a Ford can.

As a matter of fact, Toyota trucks (Hilux) are the favorite brand of terrorists and revolutionaries. Not kidding!

These cars were the best for enforcement and intimidation based on their strength. You’ll find more Toyota cars with humanitarian organizations, the Red Cross, and United Nations missions.

There are arguments that a Toyota car can travel to the far ends of the world without breaking down.

Toyota and Ford cars are equipped with an array of technology, as can be seen in each of their models. However, Toyota beats Ford in the provision of reliable technology and high ratings.

When you mention cars with the best driver assistance systems, you will find Ford and Toyota cars on that list. Toyota edges forward as they have more cars with safety awards, and the technology of Toyota is thoroughly tested before release.

Ford engines are fine-tuned for speed, power, and extreme performance. The Ford Powerstroke engine is one of the best engines in existence that beats Duramax or even Cummins engines.

You think of Ford when you want better drive handling and road grip. Horsepower, torque, and strength are some features that it delivers better than Toyotas.

However, Toyota steps up to the competition by producing more durable engines. Although they are not as fast as Ford’s, your Toyota engine will rarely break down as a Ford engine will. You get improved driving mechanics, more stability, and amazing handling.

You shouldn’t expect extreme speed and power from the Toyota engine, as the Toyota brand believes that the more an engine is stressed, the greater chance of it spoiling.

There are slight differences in the gas mileage achieved from both cars. Toyota and Ford are designed to give you high-level fuel efficiency that you can rely on. Both cars don’t adopt a fuel-saving technology as seen in Mazda and Honda, but you can expect the best from them.

The peculiarities and differences lie in the models they offer. For instance, the Toyota Corolla returns 28/37 mpg city and highway, and Ford Focus returns 26/36 mpg city/highway. This is just as the Toyota Tundra returns a better fuel economy than F-150.

You will get great fuel economy from the Ford explorer, Ecosport, Bronco sport, Fusion, Fiesta, and Escape, but there are better fuel ratings from Toyota Corolla and Camry. Even the Toyota Prius beats the Ford Fusion Hybrid in fuel economy.

Choosing between the reliability of Ford and Toyota lies on your needs and preferences. The Toyota brand symbolizes functionality and durability, while Ford emphasizes performance and speed.

The cheaper cost of ownership can also guide you in choosing which of the cars fits your budget. It all boils down to why you need a car.

Are Ford cars as reliable as Toyota?

Ford cars are reliable, but not as reliable as Toyota. Toyota cars are more reliable than Ford cars in certain categories; fuel economy, engine strength, durability, and safety ratings. Toyota also has a higher overall reliability rating than Ford cars.

Is Ford or Toyota cheaper?

Ford cars are more expensive than Toyota cars. In fact, Toyota is one of the cheapest cars to own in the industry. This goes beyond the cost of purchase. The overall cost of ownership of Toyota cars is way cheaper than what is obtainable from Ford.

Which lasts longer: Toyota or Ford?

Both Toyota and Ford have the same lifespan. You can expect your Toyota car to last up to 200,000 miles, just as a Ford will.