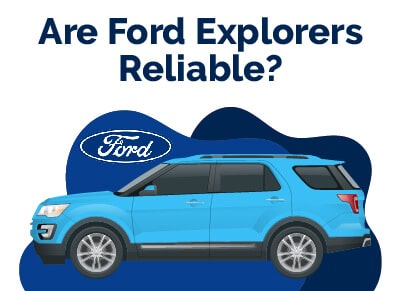 Ford cars are known for their reliability, impressive engines, and amazing performance. Ford Explorers are one of the most popular SUVs in the market. It is normal to have high hopes for the car, and it will be pitiful if the Ford Explorer fails to reach the standard that Ford cars set.

But are Ford Explorers reliable, or should you expect the worst? Well, we can say that Ford Explorers are fairly reliable. They have an amazing safety rating, nice engine performance, and low chances of severe repairs.

Keep reading to find out how reliable Ford Explorers are and what you should consider before getting one.

Ford Explorers are getting worse at gas mileage, although you can get an impressive fuel economy from the limited Ford Explorer hybrid. The drop in Ford Explorer’s reliability is coupled with the numerous problems that it comes with. These problems vary in different years, with the 2006 Ford Explorer earning up to 13,000 complaints.

While we believe that the Ford Explorer can last up to 200,000 miles, we’ve noticed that the numerous problems they have, reduce their lifespan to 100,000 miles.

Ford Explorer has numerous problems that impact its reliability. There have been many recalls in different years because these problems started compromising the safety of users. The 2013 ford explorer has up to 11 recalls, while the 2014 model has six recalls.

Overall, Ford Explorer has recalls in almost all its years of production, down to 2022 explorers. There are up to a quarter-million Ford Explorer recalls in the United States of America. These recalls are triggered by problems like wrench light turning on, transmission failures, exhaust leaks, and even engine stalling.

In most cases, some Ford Explorers recorded some of the worst driving experiences in the history of SUVs.

There are a few production years that you must stay away from, like the 2006 Ford Explorer, as they offer low gas mileage.

Ford cars are always known for durability and the use of high-quality materials. The explorers weren’t an exception to this phenomenon, as seen in the 2014 Ford Explorer.

Along the line, Ford dumped the use of high-tensile steel in the production of explorers. This decision aimed at using a lighter and more malleable material to achieve better gas mileage. This experiment failed as the use of aluminum in place of steel in Ford Explorers reduced the durability of the cars.

There were rising cases of premature corrosion, rust, and paint bubbles around the car.

Ford Explorer holds a good safety record. You must understand that this record varies across different production years of the Ford Explorer. The 2022 ford explorer has five-star ratings from NHTSA in the following areas:

Its safety records spread to the IIHS safety rating with “good” crashworthiness in:

There are “acceptable” safety ratings on seat belts and child restraints, crash avoidance, and mitigation systems.

Ford Explorer offers amazing handling and stability that you can rely on. As seen in the 2022 Ford Explorer, you have the benefits of a firm road grip, responsive brakes, and firm suspensions.

There are enough cargo holds and space for passengers and loads. You should expect up to 18.2 cubic feet of space behind the third row and 47.9 cubic feet on the second row. There is up to 87.8 cubic feet of cargo space in the 2021 Ford Explorer.

The ford explorer is one of the few three-row SUVs that offers enough space for the user. The car can contain six-seven people with enough leg and headroom for everyone.

Ford Explorer is a fairly reliable car, but this doesn’t mean they are entirely bad. You need to be lucky enough to pick one from the best production years.

The car comes with many complaints and recalls, which is an issue to worry about. It would be best to thoroughly investigate the model you wish to purchase.

Are Ford Explorers expensive to maintain?

Yes. Ford Explorers are expensive to maintain. The average annual cost of maintaining Ford Explorers is $732, which is comparatively higher than the $573 for midsize SUVs and $652 for all vehicle models.

How long will a Ford Explorer last?

On average, Ford Explorers can last up to 200,000 miles and between 10 and 17 years with regular maintenance. The lifespan of your ford explorer depends on how well you drive and maintain it.

Is the Ford Explorer good in snow?

Ford Explorers are good in Snow. Ford Explorer offers amazing traction and road stability, making it a great choice for driving through snow. The integration of a 4WD system and the intelligent terrain management system makes it easy for the car to handle snow grounds. These systems adjust the car’s handling and traction to match the driving needs and road conditions.