Ford Edge vs Ford Escape: Which Is Right For You? 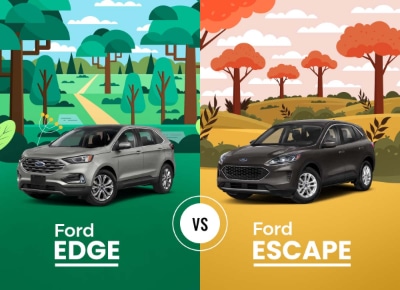 In the sport-utility market, most of the focus is on size and capability. The Ford Edge is a midsize offering with a roomy interior and lots of storage and cargo space. The Escape is a compact option with high fuel economy and good day-to-day metrics.

Choosing which is right for you will rest on what you need out of your vehicle.

Whichever you choose, both of these Ford offerings have high safety ratings, receive good customer feedback, and have smart interiors. 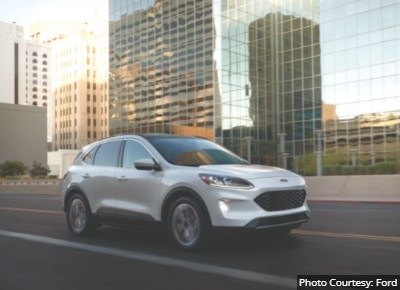 Both the Edge and the Escape are Ford vehicles, so the trim model names are similar, but the content is somewhat different. The main difference is that the Edge began its current generation in 2015, whereas the Escape was redesigned in 2020. This changes some of the options and technologies available between the two.

The base models both come with advanced safety features such as forward-collision warning, blind-spot monitoring, and lane departure mitigation. The Escape base model (S) is pretty bare-bones, while the Edge base model (SE) has more amenities. The more comparable Escape SE, however, is about equal in terms of what’s included.

Probably the greatest difference is in powertrain options. The Ford Edge has two engines, a 2.0-liter turbocharged four-cylinder and a special 2.7-liter turbocharged V6 found in the ST model. A third option pairs the 2.0-liter engine with a plug-in hybrid setup that produces both more horsepower and far better fuel economy. The Escape has three engine options, starting with the turbocharged 1.5-liter three-cylinder base engine that appears in most models. A 2.5-liter hybrid powertrain is available in a few models of the Escape, and a powerful 2.0L turbocharged four-cylinder is found in the SEL and Titanium models. 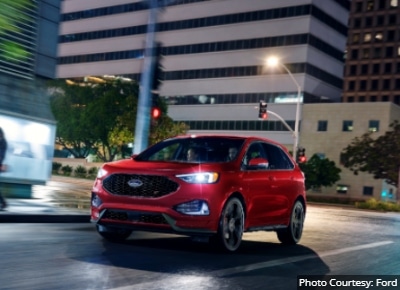 Size is obviously the largest difference between the two vehicles.

Those numbers give the Escape 104 cubic feet of passenger and cargo space versus the 153.1 cubic feet found in the larger Edge. 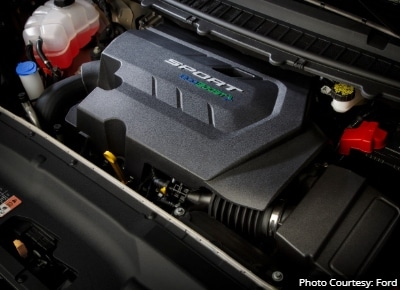 The best fuel economy in the Ford Edge comes in its hybrid option, which returns 24 mpg combined.

The base engine is similar for the Edge, but the V6 in the ST model drops that to 20 mpg combined. Those are average numbers for the segment. 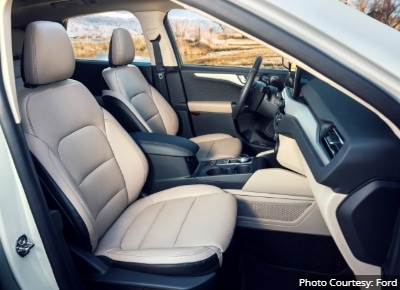 The major design differences between the Ford Edge and Ford Escape inside have to do with sizes. Since the Escape is so much larger, it has more storage and comfort-oriented things inherent to its interior than does the more compact Edge. The Edge, however, has more advanced technology thanks to its newer design overall. For most, however, outside of the amount of space available, the differences will be relatively minor.

In cargo space, the Edge is obviously better because of its size, but it’s also easier to access and more usable for larger items than is the Edge. The Escape has a slightly higher load floor, a wider opening, and generally better access when loading multiple or bulky items by comparison. 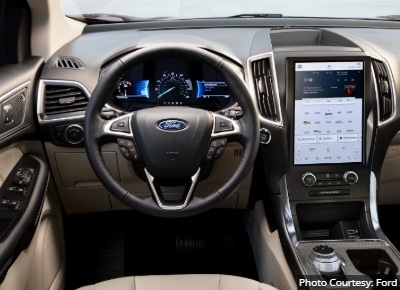 The value in these vehicles is roughly the same in terms of return on investment.

The Edge has potentially less resale given its older design, but the two are otherwise comparably priced within their vehicle segments.

We think, however, that the payback for the Escape PHEV is better overall for most customers given the fuel savings over time.

Which Is Better, the Ford Edge or Ford Escape?

The choice between the two comes down to what you need from a vehicle.

The smaller Escape is more fun to drive and more economical, but the Escape is far more spacious and comfortable for more people.

Our top choice, size aside, is the Escape Plug-in Hybrid, which adds high fuel economy to a sporty drive quality even though it does not have an all-wheel-drive option.

Which is better for off-roading, Ford Edge or Ford Escape?

Neither the Escape nor Edge are made for off-road going, but both are capable of light-duty dirt road and unpaved driving. We prefer the Escape for its smaller footprint in this regard, but the Edge will have less rattle on washboards thanks to its longer wheelbase.

Which is better in bad weather, Ford Edge or Ford Escape?

Both the Ford Escape and the Ford Edge have good all-weather handling characteristics. Even the front-wheel-drive-only Escape PHEV is good in inclement weather.

How far can the Ford Escape Plug-in go all-electric?

The Ford Escape PHEV is capable of up to 37 miles of all-electric driving. Most drivers will see well over 30 miles per charge with this vehicle.