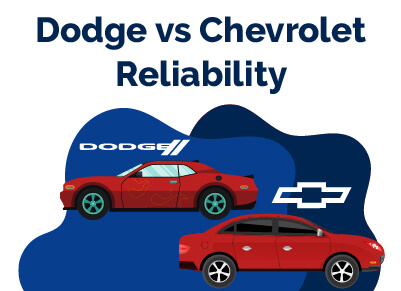 Dodge is owned by Fiat Chrysler, while Chevy is owned by General Motors. Neither of these brands have a reputation for making highly reliable cars. However, if you are looking at buying either of the cars, you must understand that Dodge is more reliable than Chevy.

Here’s all you need to know about Dodge vs. Chevy’s reliability and why Dodge is more reliable.

Dodge Vs. Chevy Reliability: Which is Better?

It is a tough decision, trying to decide between Dodge and Chevy, which makes more reliable cars. Dodge wins Chevy in the race for better reliability by offering higher dependability and a higher reliability rating.

However, Dodge falls short in safety, compared to Chevy, because the last time Dodge ever earned the IIHS safety award was in 2015.

Both car brands have held a consistent record for producing cars that are good for off-road driving. Dodge has its expertise in the delivery of muscle cars.

You must understand that both car brands are steadily improving, so there are changes in their stats this year, different from what was recorded last year. For instance, in 2021, Chevys were considered more reliable than Dodge. They had a better dependability score, 115 problems per 100 cars for Chevy.

You must understand that the reliability of Dodge and Chevy cars goes beyond the ratings. The overall cost of ownership on a dodge car is cheaper than Chevys.

When it comes to workforce and strength, you should expect better from Dodge than you will from Chevy. This is not proof that Chevy cars are made of junk. Both car brands have their setbacks and random issues, but you cannot compare the strength of Dodge’s Cummins engines to any engine.

Dodge and Chevy have entirely different design philosophies and make their designs abstractly different from each other.

Chevy adopts an evolutionary design strategy that chooses the best design for the best season. For instance, Chevy started with its one-ton truck design. They grew to the implementation of closed cab designs.

This saw the use of functional elements, prioritization of comfort, and style-defined to ensure that these cars meet users' needs. In subsequent years, Chevy grew to embrace elegance, increased capability, modern sophistication, and aerodynamics.

Its design philosophy revolves around giving users purposeful designs that are functional, sticking to a form that is appreciated.

For Dodge, designs are all about building muscle cars. The Dodge brand adopts different levels of creativity to make muscle cars look stylish. This includes using retro styles, favorite colors, and muscular frames to build a car that users can connect with.

Dodge’s design philosophy revolves around blending heritage and intangible ideas to get desired results. From the use of body-side features, fender forms, and bold wheel circles, Dodge designs scream muscularity. There are also adoptions for aerodynamics and technologies.

When it comes to exterior and interior designs, we believe it boils down to individual preferences. If you still wish to know, we believe the Dodge Ram 1500 has a better interior design and quality than the Chevy Silverado, but Chevy offers better exteriors.

It is cheaper to maintain a Dodge car than a Chevy. The average annual cost of repairing and maintaining a Chevy car is $649, while Dodge costs just $634. This includes the fact that with a Dodge car, you will only need to battle with a 0.2 chance of minor repairs and a 15% chance of major repairs.

On the other hand, Chevy cars have an average repair chance of 0.3 for minor repairs and a 15% chance for major repairs. This means you have a greater chance of battling with more minor repairs with a chevy car than with a Dodge. You might need a brief illustration to understand this.

You will spend more to maintain a Chevy Silverado than you will with a Dodge Ram 1500. The cost of driving a Dodge car for over 200,000 miles is cheaper than what you will spend on Chevys for the same duration.

Let’s get this straight. You will find more old Dodge cars running on the road than Chevys, but this is not a clear yardstick to judge a durable brand. The truth is, both Dodge and Chevy can last more than 200,000 miles, but you will have more problems to battle with on Chevy than on Dodge.

The differences in the engines and performance of Dodge and Chevy cars lie in the different models and engines you choose. For instance, Dodge’s Cummins is a better option than Chevy’s Duramax.

However, the engine performance of the Dodge Durango and Grand Caravan is nothing to write home about compared to Chevy Sonic and Corvette.

Chevy also has some good engines in its collections. From Chevy’s mystery engines, 302 small block, you can also check out the Chevy LS engines, 5.3 V8 Vortec 5300; Chevy has some great engines that you can rely on.

The gas mileage of Dodge and Chevy cars depends on the model that you chose. For instance, you will get better gas mileage on the Chevy Silverado 1500 than on the Dodge Ram 1500.

However, this is not the case for the Dodge Ram 2500 and Chevy Silverado 2500, as Dodge returns better gas mileage.

Considering the 2013 Chevrolet Sonic and the 2013 Dodge Dart, Dodge returns better gas mileage. Before making purchases for any model, you can confirm the fuel efficiency of the systems.

Although a few Dodge cars, like the Dodge Challenger, have five-star safety ratings on IIHS and NHTSA, the standards upheld ain’t as high as seen on Chevy.

The standards of reliability for Dodge and Chevy cars always fluctuate. Chevy was initially topping Dodge on dependability, but Dodge has picked up, and is starting to do better.

Your decision between any of both brands shouldn’t be limited to the overall comparison of the corporations but the models they produce.

Is Chevy or Dodge better?

Dodge is better than Chevy. In the recent 2022 dependability survey, Dodge scores better and higher than Chevy cars. You will also get more durability from Dodge cars than from Chevy. The overall cost of owning a Dodge is cheaper than owning a Chevy.

Is Dodge and Chevy the same?

No. Dodge and Chevy are in no way the same. They are owned and controlled by different companies. General Motors own Chevy, while Fiat-Chrysler owns Dodge.