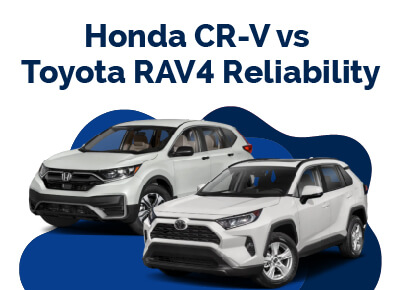 The Honda CR-V and Toyota's Rav4 are among the two top-selling small SUVs in the market.

These two models are known for their reliability, which is the reason why consumers choose these cars over their competitors.

Both the Rav4 and the Honda CR-V are built on trustworthy brands, and both feature versatile and comfortable features.

Both of these cars come with front- or all-wheel drive, which makes them ideal for those looking for all-weather traction.

The article covers everything you need to know about CR-V vs. Rav4 reliability.

The CR-V and the Rav4 are very similar in their dimensions and specs. In terms of acceleration, fuel economy, and stopping distances, they're right on top of one another. However, in the real world, they diverge significantly.

The Rav4, on the other hand, comes with a hybrid system that can reduce its fuel consumption by up to 125 gallons over 12,000 miles.

Road noise also gets into the cabin of the Honda CR-V, making it louder than the Rav4.

The prices of the Honda CR-V are lower than Toyota's Rav4. However, the margins are so fine that it's believed that the manufacturer deliberately chose to lower the prices of its two models to beat its competitor.

The various features included in different trim levels of the Honda CR-V and the Toyota Rav4 can affect the buyers' decision.

Like the price factor, the Honda CR-V outperformed the Toyota Rav4. According to J. D. Power, the CR-V scored 84 out of a possible 100, while the Rav4 earned 81.

The reliability score of the Honda CR-V is predicted to be 91 out of a possible 100. On the other hand, the Toyota Rav4 is expected to score around 80.

The Honda CR-V and the Toyota Rav4 have three-year basic and five-year powertrain warranties. These are standard features for small SUVs.

Although the Rav4 and the CR-V are spacious and comfortable for adults, the latter features one of the most spacious cabins in its class. The back seats of the Honda CR-V are also very comfortable.

The Toyota Rav4 also has a good amount of rear-seat legroom. Its passengers will also feel supported throughout the ride, and drivers will have good visibility.

However, upgrading to a more comfortable trim level with power-adjustable seats is recommended.

The Honda CR-V is also spacious when it comes to cargo space. With the rear seats folded down, it has a total cargo area of 75.8 cubic feet. This is more than enough for a compact SUV.

Although the interior quality is subjective, Honda CR-V's widely regarded as one of the best in its class. Its high-end materials and luxury-like design are some of the factors that make it stand out from the crowd.

Toyota's Rav4 interior features high-quality materials and feels solid. Its finish and fit are also excellent, though the base model's interior is on the basic end of the spectrum. Even the top-end models are less luxurious.

The base model of the Toyota Rav4 is better equipped with an adequate in-car entertainment system.

Its 7-inch touchscreen display comes with Apple and Android Auto, as well as Amazon Alexa and Wi-Fi. The only USB port is available, and drivers can upgrade to additional ports and wireless charging.

Drivers who want to upgrade to a 7-inch display must go to the other trim levels.

The continuously variable transmission used by the Toyota Rav4 and the Honda CR-V is more effective.

The latter is equipped with a turbo-four engine that produces 190 horsepower. Its CVT simulates gear changes while driving.

The Rav4 is capable of handling itself well, especially when driving. However, on the highway, its four-cylinder engine becomes noisy. The CVT is designed to maintain high revolutions to improve fuel economy.

The Honda CR-V and the Toyota Rav4 can get better gas mileage than other compact SUVs. The CR-V is expected to reach 27 City/32 highway with front-wheel drive and 32 city/34 highway with all-wheel drive.

On the other hand, the Rav4's all-wheel drive models range from 25 to 34 miles per gallon.

Although the CR-V and the Rav4 perform well on the road, the Toyota Rav4 can handle itself off-road. Its TRD Off-Road trim adds a bit of off-road excitement to the vehicle.

The Toyota also feels smooth on the pavement, and its suspension can handle bumps without feeling too floaty.

The Honda CR-V is a more comfortable vehicle than an athletic one. Its cabin is quiet, and its engine doesn't produce excessive road noise.

The two compact SUVs scored 9.4 out of 10 in the NHTSA's safety ratings. They also received five stars for their overall rating.

We considered the standard features of the two models to pick a winner.

The Toyota Rav4 is the best choice for 2022, with various standard features. Some of these include automatic parking assist and pedestrian detection.

Although the Honda CR-V has various standard safety features, it only offers blind spot monitoring and rear cross-traffic alert.

The average cost for repair and maintenance for the CR-V costs $407 yearly, while the Rav4 costs $429 yearly.

Despite the close competition, the Honda CR-V won multiple categories over the Toyota Rav4. It's also one of our top picks for the Best Compact SUV for the Money.

Its smooth handling, safety features, and luxury interior make it an ideal choice for those looking for a great deal on a compact SUV.

Toyota's Rav4 is not a slouch, as it has plenty of standard features and is also equipped with various high-tech functions.

However, the Honda CR-V is a bit better in several aspects and is a hundred dollars cheaper than the Rav4. Both are great small crossovers, and you can't go wrong with either one.

Which Gets Better Gas Mileage, Cr-v or RAV4?

Despite outshining the CR-V in terms of power, the Toyota RAV4 still gets better gas mileage than the latter. According to the EPA, the four-door can achieve 30 miles per gallon combined and 35 miles per gallon on highways.

How Long Will a Honda Cr-v Last?

How Long Will a RAV4 Last?

Experts agree that a Toyota RAV4 can last up to 250,000 miles if properly maintained.

Is Honda Cr-v Expensive to Maintain?

The low-cost maintenance costs of the Honda CR-V make it an ideal choice for people looking for a compact SUV. It costs around $407 to maintain the vehicle annually, which is cheaper than the average of $521 for compact SUVs.

Why Do Toyota's Last So Long?

Toyota vehicles are known for their long-lasting and reliable engines due to the company's continuous efforts in developing and manufacturing vehicles.

Are Toyota RAV4s Expensive to Maintain?

The low-cost maintenance costs of Toyota's vehicles are also known to make it an ideal choice for people looking for a compact SUV.