How Much Does It Cost To Rebuild an Engine? 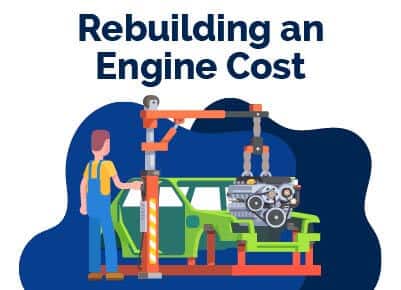 Even if you can rebuild an engine, replacing a machine is typically one of the most expensive repairs a vehicle can undergo.

There are many ways to get rid of your car, such as donating or selling it. However, if you have a choice between getting rid of your car or buying a new one, you must consider the various factors that go into an engine replacement.

The components of your vehicle's engine are constantly subjected to intense pressures and temperatures daily, which can cause them to wear and tear even if properly maintained.

If your car is regularly maintained and doesn't overheat excessively, this can significantly reduce the time it takes to replace an engine. But how much does it cost to rebuild an engine?

Engine rebuilding cost depends on your car brand, model, and the kind of engine you’re rebuilding. We will discuss all of that so you know exactly what to expect whenever you are thinking of rebuilding your engine.

Why Rebuild an Engine?

If you're a classic car collector, you might have a limited-edition vehicle you're passionate about.

For some, replacing an engine is a part of their hobby, even if they can afford to buy a new one. For others, replacing a machine is not an option.

The rising cost of new cars has made replacing an old engine more affordable than buying a new one.

If you have a vehicle that you want to upgrade but can't afford to spend a lot of money on a new car, replacing an old engine might be an economical option.

Before you start the process of rebuilding a machine, it's essential that you thoroughly research the details of your car.

How Do I Know My Engine Needs a Rebuild?

Various signs can tell you that it's time to start rebuilding your vehicle's engine. They include the following:

If the engine begins making sounds like it's rattling or knocking, you must take immediate action to address the issue.

However, if the noises worsen, it might be time to consider replacing the engine.

One of the most common reasons a vehicle might need to be rebuilt is the wear and tear on the internal components.

If you're experiencing this issue, you must contact a mechanic to diagnose and fix it. The condition is referred to as a "piston slap," and you need to fix it immediately.

If the sounds worsen, it might be time to inspect the engine. Doing so can help identify potential problems and reduce the cost of repairs.

The wear and tear on its internal components are common reasons your vehicle's engine might not want to turn over.

However, it could be a more serious issue if it's still happening after replacing or charging the battery.

Other possible reasons your vehicle's engine might not want to turn over are a faulty starter motor, an issue with the wiring, or a seized engine.

If this issue persists, it could be time to replace the battery or the ignition system.

When you try to start a vehicle with a seized engine, all of its components will operate normally.

If the smoke from the tailpipe is thick, it could be that the oil or the liquid coming from the combustion chamber is getting into the wrong part of the engine.

This could be caused by a broken engine block or the head gasket.

An issue that could cause your vehicle to fail is the cooling system failure. Low levels of liquid or total leakage can lead to engine failure.

For example, one of the most common reasons your vehicle's engine might not want to turn over is the head gasket's leaking.

Insufficient lubrication is another common reason why your vehicle's engine is failing. This issue could be caused by an overabundance of oil sludge or overheating.

It's important to note that the oil is required to cool certain parts of the engine, such as the cylinder wall and the piston.

How Much Does It Cost To Rebuild an Engine?

Like other car parts, the cost of a car rebuild varies depending on the make and model of the vehicle.

In addition to the components, the amount of money you spend on rebuilding depends on the type of vehicle and how deep the repairs need to go.

For instance, if you need to replace the cooling system, you might spend a lot of money on a whole rebuild.

Depending on the type of vehicle and the repairs that need to be made, the cost of an engine rebuild can range from around $2,500 to around $4,500. If you can handle the repairs, you might be able to rebuild your engine.

However, if you're not willing to spend much money on a rebuild, you can always purchase used car parts or salvage cars for a low price.

Factors Affecting the Cost To Rebuild an Engine

The type of car you drive affects the cost of rebuilding an engine. For instance, if you have a small four-cylinder machine, you'll be able to spend less on repairs than a big V8.

Also, the cost of rebuilding an engine can vary significantly depending on the model.

A simple rebuild will require replacing the seals and bearings. However, replacing these components could allow you to get back on the road quickly if there are no other significant issues.

However, you might spend a lot of money on repairs if you have a severe issue, such as a faulty cylinder head or a cracked crankshaft.

At some point, it's time to consider replacing the entire engine. Aside from the components, it's also essential to consider the type of repairs that will be required.

What Does Engine Repair involve?

Besides the components, the repair also involves other issues with the vehicle, such as faulty ignition wiring. These can potentially cause problems beyond the engine.

One of the most common engine repairs that are usually performed is the replacement of the rings and valves. However, this process can be done without replacing the other components.

If your vehicle's cylinders are starting to wear out, you might need to perform other engine repairs, such as boring the cylinder wall.

Doing this will require the removal of all of the components, including the rings and valves.

In addition to these, other repairs might also include the replacement of the main bearings and the freeze plugs.

A complete engine rebuild can be very time-consuming and require much knowledge. It can also be expensive to get the right parts for the job.

Is It Worth Rebuilding an Old Engine?

Even if you have a new engine, an old car might not be worth much more than its current value.

Therefore, a complete rebuild can benefit both the buyer and the vehicle, as it can enhance the value of a car that doesn't require much maintenance.

Will Rebuilding an Engine Make It New?

A rebuilt motor can also provide a vehicle with better longevity. In most cases, a rebuilt engine is not new, as all components were replaced.

Although a rebuild doesn't replace a brand-new engine, it can significantly improve the life expectancy of your vehicle by enhancing its performance.

In most cases, the new parts were re-engineered to match the factory specifications.

Should I Rebuild My Engine or Swap It?

Purchasing a new car is typically more expensive than repairing it. However, if you've ever been confused about the difference between buying and repairing vehicles, you might be able to save money by having an engine rebuilt instead.

In most cases, it will cost around 10% to 20% less to reconstruct an old engine than to replace a new one.

Is It Cheaper To Replace an Engine?

So promptly having issues with your engine can help you save money and time.

How Long Will a Rebuilt Engine Last?

A good engine rebuild can extend the life of your vehicle by improving its performance and keeping it on track for many years. You can also boost its mileage by performing some work on the car.

How Long Does an Engine Rebuild Take at a Shop?

Replacing an engine on a new car usually takes around 15 to 25 hours. In addition to the latest parts, you'll also have to spend a lot of money on repairs.

If you buy a short block or a long block, you might end up with a loss.