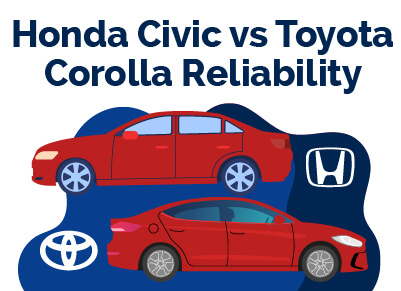 The Toyota Corolla and Honda Civic are among the two most popular compact cars in the market today. Both have great features and are known for their safety. However, they have their pros, cons, and reliability ratings.

It can be very exciting to purchase a car, but it can also be very challenging to make an informed decision due to all the details involved.

For instance, when it comes to choosing between the Toyota Corolla and the Honda Civic, it can be very challenging to make an unbiased decision.

In this article, we'll compare between Civic vs. Corolla reliability, talking about their various features to help you make an informed decision when it comes to choosing a compact car.

Which Is Better, the Honda Civic or the Toyota Corolla?

The choice between the Honda Civic or the Toyota Corolla depends on your lifestyle.

For instance, if you're a fan of sporty interiors, you might prefer the Civic, but if you care about your comfort and the environment, the Corolla would be the preferable option.

The Honda Civic is popular among car enthusiasts due to its solid build, sporty looks, and handling. It's also great for city driving and can inspire stunts in parking lots.

The 1.5-liter engine is standard in the Sport and Base trim levels of the Civic. It can produce 158 horsepower and a fuel economy of 31 miles per gallon in the city and 40 miles per gallon on the highway.

On the other hand, the Touring and EX models get an output of 180 horsepower and a fuel economy of 37 miles per gallon.

The Toyota Corolla is another popular choice due to its smooth, comfortable ride and excellent handling.

It has a standard 1.8-liter four-cylinder engine and a continuously variable automatic transmission. The other engine options are a two-liter, four-cylinder, and six-speed manual.

The Corolla is also available with a hybrid option that combines a 1.8-liter four-cylinder engine with an automatic transmission. The more powerful models of the car are equipped with larger engines.

The Corolla's standard engine produces 139 horsepower and can deliver a fuel economy of 30 miles per gallon in the city and 38 on the highway.

However, equipping the two-liter with a larger engine produces a more potent 170 horsepower. On the other hand, the hybrid model can get you the most improved fuel economy with an output of 121 horsepower.

The interior of the Honda Civic features minimal styling and a clean design. It features a four-speaker audio system and an infotainment system that can keep you connected to the outside world.

You can also use Bluetooth and Android or Apple integration to access various features.

The interior of the Toyota Corolla is luxurious and comfortable. It features soft-touch materials and a bold design.

The base model of the car comes with a seven-inch infotainment system. Like the Civic, this feature also comes with Bluetooth and Android or Apple integration.

Both the Honda Civic and Toyota Corolla come standard with various safety and driver-assistance features. These include adaptive cruise control, collision avoidance, and lane departure warning.

The Civic is a surprisingly spacious car that can accommodate five people. Its passenger volume of 99 cubic feet makes it ideal for transporting friends.

Its cargo space of 14.8 cubic feet is also ideal for storing food and other household items.

If you're tall, the Honda Civic has a generously-sized cockpit with 42.3 inches of legroom and 39.3 inches of room.

The Toyota Corolla has five seats that can accommodate five people. Its passenger volume is 88.6 cubic feet, and has a cargo space of 17.8 cubic feet. The back seats can be folded flat for easy access and storage.

The Toyota Corolla's cockpit is spacious in both the sedan and the hatchback segments. It features 38.3-38.4 inches of room and 42 inches of legroom.

You'll likely find a model that fits your lifestyle with a sufficient cash reserve for another purchase.

The prices of the two cars are similar. The base model of the Toyota Corolla costs around $20,075, while the top-end model of the vehicle starts at almost $28,000.

The used Corollas for sale at around $7,700 are a good deal if you're in the market for a used car.

This means that the Civic and Corolla are reliable cars that are still very popular.

The Toyota Corolla has eight standard airbags, which include a front and rear passenger airbag, an advanced airbag system, and a side-mounted side airbag.

The other car models didn't earn the Top Safety Pick badge from the Insurance Institute for Highway Safety.

The Corolla was also awarded a 5-star overall rating by the National Highway Traffic Safety Administration.

All of the different models of the car earned 5 stars in all categories. Only the Si and the Frontal Crash categories were awarded 4-star sub-scores.

The other models of the Honda Civic received 5-star ratings from NHTSA.

The two gasoline-powered variants of the Honda Civic, the HF model and the hybrid, have fuel economy ratings of 41 miles per gallon.

On the other hand, Honda's Civics can achieve fuel economy ratings of 39 miles per gallon.

The study also noted that the annual cost of repairs for the Honda Civic is around $368.

This is $6 more than the Toyota Corolla's yearly cost. As a result, the Honda Civic was awarded a 4.5 out of 5 rating.

The Corolla uses a 169-horsepower 2.0-liter four-cylinder engine to power the front wheels through an automatic transmission. The hybrid version of the car shares the same engine type.

The base model of the Honda Civic comes with a 2.0-liter four-cylinder engine that produces 158 horsepower.

On the other hand, the upgraded model features a more powerful 1.5-liter four-cylinder that produces 180 horsepower.

The Honda Civic and the Toyota Corolla come with advanced technologies commonly used in the car industry.

Although the prices of used cars vary depending on their year and mileage, the Corolla usually costs around $1,110 less than the Civic.

It's a close call, but we believe the Honda Civic slightly edges the Toyota Corolla as the better car.

Is a Honda Civic Smaller Than a Toyota Corolla?

Not true. Toyota's Corolla measures 182.3 inches long. The Civic, on the other hand, has an overall length of 184 inches.

Which Corolla Is the Best?

Although it's a subjective question, the Toyota Corolla XSE seems to be the more popular model based on the sales numbers. The XSE's sporty exterior and sharp headlights are some of the factors that have helped it gain popularity.

Which Is Better, Honda Civic Sport or Ex?

Although the Civic Sport has more power than the small-block V-8s of the past, the 2021 Honda Civic EX is the better choice if you're looking for a more powerful model.The Civic EX comes with a 1.5-liter four-cylinder engine capable of producing 174 horsepower.

Is Honda More Reliable Than Toyota?

Toyota vehicles are known to last longer than Honda cars. Based on consumer reports, Toyota is regarded as the second-most reliable brand after Mazda, while the Corolla is the most reliable vehicle.

How Long Will a Honda Civic Last?